In her final blog post, the much-admired policy analyst wrote: 'We all have an obligation, in as far as we are capable, to work to diminish human suffering' 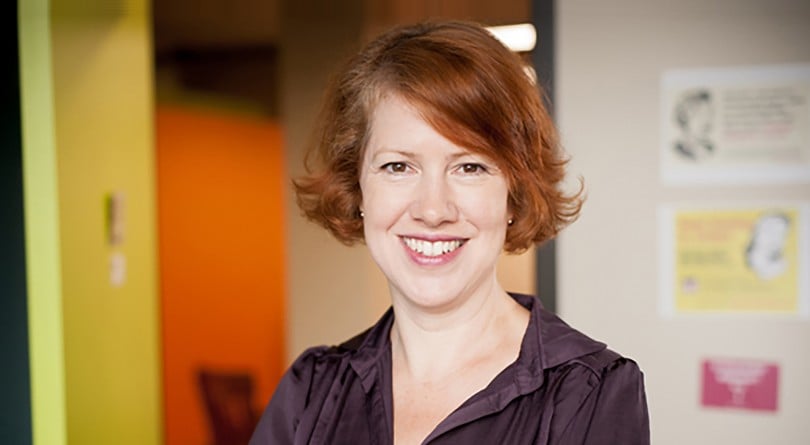 In September 2017, during her presentation before the Standing Committee on Finance’s pre-budget consultations, policy analyst Kate McInturff went public for the first time with the fact she’d been undergoing cancer treatment for three years (video here). The prognosis was not good, the senior researcher at the Canadian Centre for Policy Alternatives, an independent Ottawa-based think tank, revealed. “I don’t know how many more budgets I have to look forward to,” she said, before lightening the mood with humour. “I know this isn’t the Make a Wish committee,” she said. “But if I can convince you to take one action to make one change that has the power to change lives and indeed to save lives while I still have the energy to harass you, it is this: invest in women’s organizations.”

For the next five minutes, armed with assiduous research and analysis, Kate outlined how investing in organizations that help women offered the single most effective means to build better public policy and better lives for women. She name-checked organizations doing vital work: Anderson House, a women’s shelter in Prince Edward Island; CALACS-Estrie, which helps sexual assault survivors in Sherbrooke, Que., and the Calgary Immigrant Women’s Association. She detailed how the ripple effect of the Dutch government’s $100-million investment in a gender equality fund changed the lives of hundreds of thousands of women. Kate also drilled into the fact that violence against women in Canada costs the economy some $12 billion annually, or $415 per capita, an amount on par with the economic costs associated with smoking and use of illegal drugs. Yet by her calculations, the feds were spending only $5 per capita. Funding of women’s programs at Status of Women Canada was even worse, she said, noting “its budget represents—I’m going to say this slowly—less than one one-hundredth of one percent of total federal program spending,” unchanged in a decade. That clocks in “at about a buck a woman.” Again, she referred to her illness: “It’s like we have a pill that’s going to cure cancer and it costs $500 and we’re giving everyone 50 cents, and saying, ‘Good luck with that. Please report quarterly,’ ” she added, a dig at the administrative burden these underfunded organizations bear for the pittance received.

Sadly, no such cancer pill exists. Kate McInturff died on July 27 at age 49. Her death is a tragic loss for her 13-year-old son, Rowan, her family, her colleagues and her many friends. Like many policy analysts, hers was not a household name. Yet her intrepid, important work identifying and advocating for policies to improve gender equality, while educating on how the economic needs of men and women differ, reverberated in public policy. Her annual report, The Best and Worst Places to be a Woman in Canada: The Gender Gap in Canada’s 25 Biggest Cities, which published its fourth issue last fall, stoked national conversation. “Statistics will never be a substitute for the full experience of lives lived,” Kate wrote. But she understood they do provide a road map, as well as insight into where fault lines exist—and where policy can help.

Quebec routinely outperforms in “Best and Worst Places,” she explained to me last year, due to its universal accessible and affordable daycare.  Providing daycare is the number one lever the government has to improve women’s economic well-being, she said, rhyming off five things the government could do to improve gender equality. In another conversation we had during the 2015 federal election campaign focused on “women’s issues,” Kate expressed outrage  that there was virtually no discussion about women over 65 living in poverty.

Kate’s untimely death summoned an outpouring of tributes, including one on Twitter from federal Finance Minister Bill Morneau, who called her a “trailblazer in the fight for gender equality” whose “work has made Canada a better place for all of us.” “It’s a rare day when you see the impact of your work in federal government policy,” says David Macdonald, CCPA’s senior economist and Kate’s friend. Others paid homage to Kate’s fierce love for Rowan, her empathy, her wit, and how she was a mentor to  and role model for many. Julie Lalonde, the feminist educator and activist on issues surrounding sexualized violence, wrote of how Kate, who hired her for her first “feminist job,” was an unrelenting champion of Shine Theory: “Fighting for other women to succeed is in her DNA.”

Born in Seattle, Kate studied literature, earning a Ph.D. in post-colonial studies from the University of British Columbia. She began her career in academia, which included teaching at the University of Ottawa, before deciding in 2007 that her researching and analytical skills would be more purposefully applied in the non-profit sector to combat what she called “my dismay at the stupidities wrought by sexism, racism and misogyny.” She joined the CCPA in 2013.

Kate’s genius was in code-switching, says Emily Turk, CCPA’s former director of communications and a close friend: “She was this badass feminist activist who also prided herself on knowing how to talk to a room of white dudes in power.” Women’s organizations tend to advocate from a moral stance or a rights-based stance, Turf says: “Kate found this superpower in blinding them with science. It was all about the facts.”  Kate had a keen sense of how you could create a quantitative story with numbers, says Macdonald: “How can we make this concrete in terms of what to ask at the federal or provincial level?”

Kate’s style was singular, friends note. She was a pearls-wearing activist, who with a dark sense of humour would lead an outing to see Mad Max: Fury Road and also crochet baby blankets for friends’ newborns. Macdonald recalls delivering two baby blankets Kate made to a colleague’s twin girls only two weeks ago. Kate was unlike anybody else, Turk says: “She’s out of time, very much a lady,” she said, noting her love of jazz and Nina Simone. A few weeks ago Kate sent Turk a photo of a colourful Marc Jacobs bag she’d just bought, with the message: “When everything else sucks, buy yourself a purse.” “Kate could wear a sweater set to work and then go full tilt at a protest the same day with her son,” Lalonde tweeted with a photo.

Kate’s death came as a shock to many because she continued working tirelessly through chemotherapy, even after she went on long-term disability. She felt safe mentioning her cancer before the budget committee, Turk notes. “She joked that no one watches CPAC.” Kate attended the 2018 budget lock-up this spring and explained why the wage gap was “everyone’s problem” in Maclean’s wage-gap issue. She also had a hand in the selection and training of her replacement at the CCPA, which is establishing a fellowship in Kate’s name. “She didn’t want her illness to define her,” Macdonald says. Kate was a private person, says Turk. “She wasn’t doing the glamorous work. She was doing the necessary work.” 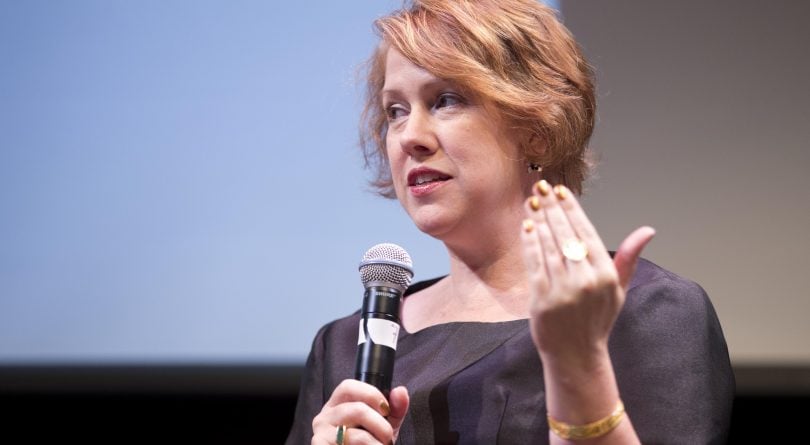 Kate Mcinturff participated in the Up For Debate event at the Isabel Bader Theatre. (Lucas Oleniuk/Toronto Star via Getty Images)

While Kate possessed a formidable and critical intellect, she was ultimately an optimist. Even amidst skepticism that the Liberal’s “feminist” branding was more “talk” than “walk, she was always willing to give them the benefit of the doubt, Turk says. Kate’s analysis of the Liberals’ 2016 budget was withering: she pointed out that women comprised only 36 percent of the beneficiaries in the $11.6 billion in job creation measures expected to add some 143,000 jobs.

At the pre-budget consultation in 2017, Kate spoke sharply: “After decades of neglect, it has occurred to me that perhaps fundamentally at some unconscious level, we just don’t trust women with money,” she said, before challenging the government. “So prove me wrong. Show Canadians that this is a government that is willing to support the organizations that are delivering dignity and security to women in their communities…. Show Canadians that the future really is feminist.”

Kate’s analysis of the 2018 budget was far more upbeat, with numerous caveats: the government’s spending priorities remained in predominantly male occupational sectors; the budget didn’t help low-income women and perpetuated the big gaps in pay and employment between white women and Indigenous women, racialized women and women with disabilities. The fact the government earmarked money to help pay tuition for women to enter the trades was “fantastic,” Kate wrote, but “does nothing to address the hostile climate that leads to very high attrition rates for women in the trades.” Kate’s attitude was, ‘This is a huge step forward. Let’s keep at them, and more will come,’ ” Turk says.

Kate’s final blog post, “Love and Spreadsheets”, written days before her death, was thoughtful and instructive. “We all have an obligation, in as far as we are capable, to work to diminish human suffering (thoughtfully, carefully, as allies),” she writes. Always question, she advised. Policymakers told her there was no money for women’s programs, so she crunched the numbers and proved them wrong: “Turns out there is money to be had for these things. Turns out that with a calculator, a passing knowledge of tax policy, and a big love of data, a woman can show you the money.”

Her legacy, she believed, was her “spreadsheets, graphs and love for you all.” She’s right, of course. But, as we’re just starting to see, it’s far, far greater.