Little mosque in an Anglican church

'Have you seen Little Mosque on the Prairie? It’s the same but in real life.' 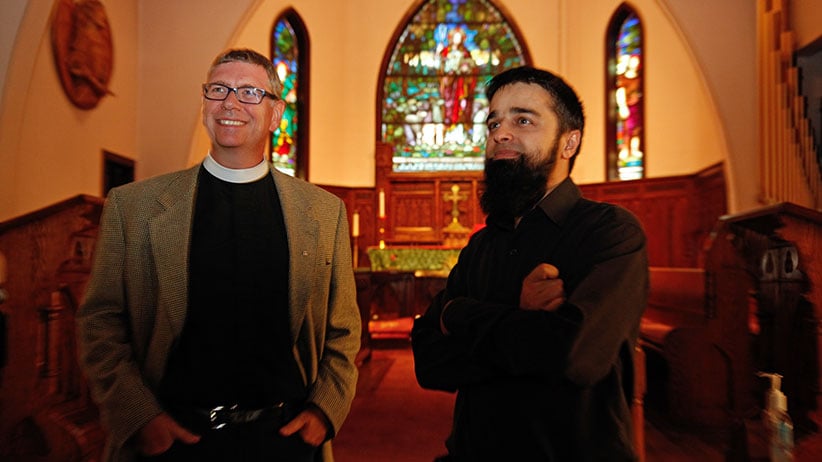 The first time Rev. Andrew Wilson heard about a group of Muslims renting out a prayer space inside an Anglican church, it was the storyline for the TV sitcom Little Mosque on the Prairie. It was there in the fictional town of Mercy, Sask., where the local Muslim community grew large enough that it needed its own space for worship. A church in the neighbourhood was willing to rent space to the newcomers—even if the idea irked a minority of Islam-fearing locals.

But the town grew together as the show lasted a solid six seasons, with the series finale broadcasting in 2012. Then, a few years later, Wilson saw something strikingly similar taking place in his real-life hometown of Leamington, Ont. The federal government had designated the city, located at the western end of Lake Erie (the heart of tomato country), as one of three municipalities across Canada that would start accepting government-assisted Syrian refugees. The region’s once-small Muslim community soon needed a bigger place for worship than the cramped office space it had been using.

One of the local Muslim leaders called Wilson, rector at St. John the Evangelist, to see if they could rent out space in the basement of his Anglican church. After consulting with his parish council and bishop, Wilson obliged. “In the same way the communities grew together [on the show], that’s literally what happened here,” Wilson says. “They’re effectively operating as a church within a church.”

Word of the Leamington Mosque is starting to spread. When Shawn Chaudhry moved from Mississauga in June, leaving behind his former career as a banker to buy a local Shell gas station, the nearest mosque he could find was in Windsor, Ont.—a 40-minute drive away. But on the Friday afternoon of his first week in town, he was standing in line at the bank when he overheard someone speaking in Arabic.

RELATED: What Little Mosque on the Prairie would be like today

Chaudhry knows only basic Arabic, but approached to ask if the man knew of a place to worship. The gentleman, a Syrian refugee, simply instructed Chaudhry to follow him—and they walked into the nearby church. At first, Chaudhry was confused: “I thought he didn’t understand me,” he laughs. But they continued into the basement where, to Chaudhry’s surprise and delight, a few dozen Muslims were rolling out carpets in a nondescript room, free of the crucifixes or stained-glass found on the main floor above.

Among the group are businessmen and labourers both young and old. Many are born and raised in Canada. Some are immigrants from Pakistan. Others are Syrian refugees sponsored by the very Anglican church that now hosts their mosque; and who help spread word of it to fellow refugees, via a WhatsApp group-chat.

Chaudhry remembers kneeling to worship one day and seeing Father Wilson—wearing his Anglican priest’s white collar—praying in the same exact way. “Even if he didn’t understand the words, that showed how we respect other religions and other beliefs,” Chaudhry says.

On a warm afternoon in mid-September, about 20 Muslims have arrived at the church for Friday prayers. It’s about half the size of the usual gathering, says Najam Jutt, who is not an imam but often leads prayers; the light attendance could be on account of a nearby fire shutting down traffic on the street.

They roll out the carpets, facing them towards Mecca with the help of a compass. There’s a small partition should women wish to worship too, though none show up on this day. Shoes come off and everyone goes to his knees for a service that runs with efficiency many Christian church-goers can only dream of on Sundays. 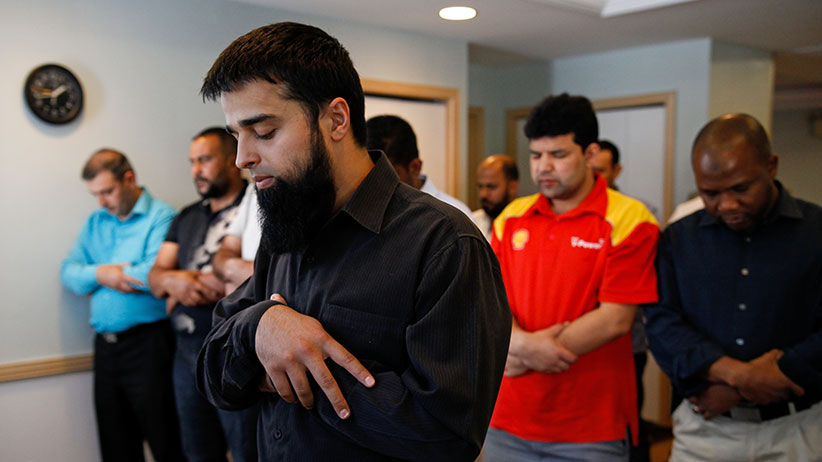 It begins with prayers in Arabic, and a brief sermon in English about resiliency during life’s struggles; more prayers follow, and then everyone is back on his feet and ready to head out the door. It takes only 30 minutes from start to finish—partly out of necessity: everyone has to get back to work.

The church and mosque have received their share of praise in the local community—hailed as a beacon of goodwill and multiculturalism at a time when politicians play identity politics, and leaders like Donald Trump talk up the threat of “radical Islamic terrorism”—and Wilson says he’d heard no complaints from anyone in his parish. But that doesn’t mean he’s been immune to xenophobic messages. “I’d prefer not to show you the emails,” he says.

Indeed, if history is as reliable a guide as the TV show, some remain skeptical, even angry. The Church of the Good Shepherd in Woodstock, Ont., for example, had a dedicated space for Muslims to worship for nearly a decade, starting in 2008. “I certainly heard on occasion—not regularly—from other denominations in town that were disgusted by the arrangement,” says Rev. Chris Travers, the minister of that church. What was the issue? “Predominantly their ignorance towards what Islam is about,” he says.

But he didn’t stop letting them pray in his church basement before his own numbers started to dwindle and the congregation moved to join a nearby church earlier this year. The new venue didn’t have enough space to accommodate a mosque. “A couple of them came out to our final service at Good Shepherd,” recalls Travers, “to thank us for the arrangement and wish us well.”

RELATED: Where will P.E.I. Muslims go to pray?

Sure, there might be some differences between the two religions, most notably Muslims don’t believe Jesus is the son of God. But that doesn’t stop Wilson from kneeling on the carpet beside them to pray on a Friday afternoon in mid-September—even if he doesn’t understand Arabic. “It’s the same God,” Wilson says. “When people say, ‘Amen,’ which they do, I can respond, ‘Amen.’ ”

When the gathering is over, as the Muslims put on their shoes, many make a point of shaking Wilson’s hand before heading back to work, thanking him again for opening up this space for them to pray—even if they are paying for it. Wilson then invites them all to an upcoming potluck hosted by the church. Many seem keen to join.