Love the one you're with 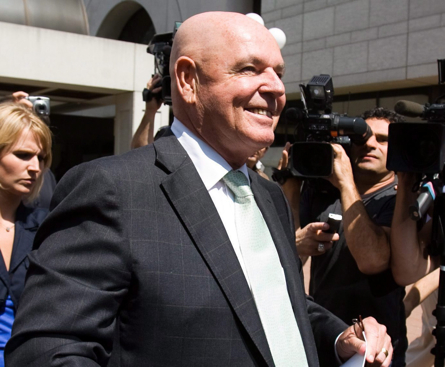 The week’s juiciest political story turned out to be a dud. Not long after the Toronto Star published a front-page article about a “trio of Liberals” looking to defect to the Tories, the paper backed away from the story, claiming it had been misled by Alykhan Velshi, Immigration Minister Jason Kenney’s communications director. Needless to say, the defections never materialized.

But let us consider the consequences of an alternate ending—one in which three Liberals had in fact switched sides. Let us further imagine that one or more of them had taken a cabinet post. After all, it’s not unusual for defectors to be rewarded with high-profile jobs. When Belinda Stronach left the Tories in 2005, she was immediately appointed the minister of human resources and skills development. More recently, David Emerson was elected under the Liberal banner in 2006 after vowing to be “Stephen Harper’s worst nightmare,” but he soon left the party to become minister of international trade in Harper’s new minority government. Though Stronach and Emerson faced the wrath of voters and columnists across Canada, their troubles never escalated to the legal arena. But things might have been different this time around for the Liberals’ supposed malcontents thanks to a ruling in the trial of Ottawa Mayor Larry O’Brien.

This past spring, O’Brien was accused of influence peddling for allegedly promising a political rival a seat on the National Parole Board in exchange for dropping out of the city’s mayoral race. For O’Brien, even though he was eventually acquitted, it was the latest in a seemingly endless series of political headaches since his 2006 election. But for prosecutors, it was an opportunity to test arcane Criminal Code provisions against political corruption that hadn’t been litigated in decades.

Midway through the trial, O’Brien’s lawyers argued the case should be thrown out on the basis the Crown was seeking to criminalize commonplace political wrangling—in this case, promising a political appointment to an opponent in exchange for help. Going into the trial, lawyers had speculated the Crown’s case against O’Brien might be dismissed for that very reason. Even Justice Douglas Cunningham conceded that “the very nature of political activity does involve a certain amount of trading and promises. If you support the party, you will be rewarded, whether it’s actually stated or implied. That’s the nature of patronage.” But Cunningham ended up not only rejecting O’Brien’s request for a dismissal, he opened the door to future prosecutions against politicians who deal in high-level quid pro quos.

“The Crown submits that just because this activity is one of politics’ dirty realities does not make it any less odious, indeed criminal,” Cunningham wrote in his decision. “I agree with this submission. In short, just because it happens doesn’t necessarily make it acceptable.” Cunningham’s ruling now stands as the reigning precedent for such cases, meaning floor-crossings could be subject to investigations similar to the one that befell O’Brien if they’re suspected of having been motivated by the promise of a promotion.

“There is a warning out there,” says Errol Mendes, a professor of law at the University of Ottawa of the impact Cunningham’s decision might have on political life in Canada. He suggests lawyers will likely be advising MPs to be more cautious about the kinds of promises they make while striking deals. “Just the fact that [O’Brien] had to go through the allegations, the trial, etc.,” says Mendes, “those things alone should send a warning to people—don’t go anywhere near those sort of possible allegations.” Mendes hopes Cunningham’s “rap on the knuckle” will persuade politicians to be on their best behaviour in Ottawa. “The Canadian electorate is getting very tired and losing trust in politicians,” he says. “The most destructive impact of this is that it loosens trust in all democratic institutions.”

No matter how much they anger Canadians, defections aren’t likely to disappear from the political landscape any time soon. Still, had the Conservatives successfully lured three of their putative opponents to switch sides, it may have at least provided an opportunity to test whether Cunningham has succeeded in making them less lucrative.