Branded a terrorist driven by Islamic State, the man who struck a soldier with his car in Quebec was really a lone wolf with nothing to lose 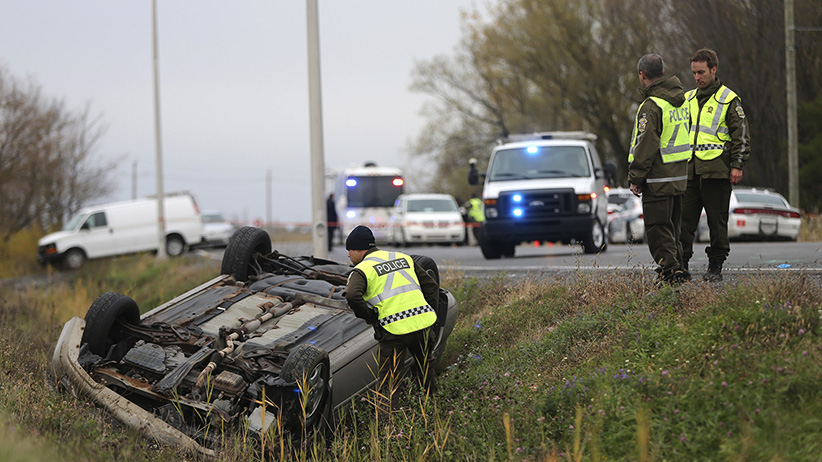 It is a nightmarish plot ripped straight from the pages of a television drama. A young man lies in wait outside a shopping mall on a chilly fall morning. A recent convert to Islam, he searches out his victims from behind the wheel of his car. He spots two military men in uniform and promptly runs them over, killing one and injuring another. The man crashes and flips his car in the ensuing police chase—then attacks officers with a giant knife. He dies in a hail of bullets.

In fact, you might say that Martin Couture-Rouleau was a double nightmare. Not only was the 25-year-old man apparently compelled by his beliefs to attack two “infidels” in military uniform, Couture-Rouleau was by all appearances as Québécois de souche as his surname would suggest. White, French-speaking and the owner of a small pressure-washing business, Couture-Rouleau was as normal as could be before he found radicalized Islam. He is a nightmare, because he seemed so innocuous.

Separated by an ocean from the roiling disaster of the Middle East, Canadians are meant to be immune from such dangerous flights of fancy. But radicalized Islam, so the argument goes, is the political version of Ebola: amorphous, virulent and contagious to many. And much like Ebola, Couture-Rouleau’s murderous and ultimately suicidal hit-and-run threatens to send the country into hysterics as we debate the place and effect of Islam in society yet again.

Not the isolated actions of a madman, Couture-Rouleau’s rampage “marks the first time this type of terrorist act occurs in Canada,” as one La Presse columnist darkly intoned. If Couture-Rouleau wanted to be martyred, he got his wish within hours of his death when Prime Minister Stephen Harper mentioned the “deeply troubling” attack in the House of Commons, well before authorities announced the attack was likely terrorism-related.

The near-immediate politicization of Couture-Rouleau’s acts comes as the country dispatches six fighter jets to aid in the bombardment of Islamic State—the very group to which Couture-Rouleau declared his affinity. Harper’s political opponents have come out against Canada’s mission, and it’s difficult to see Harper’s words on Couture-Rouleau’s attacks, prompted as they were by a softball question from his own caucus, as anything but a political gambit to bolster public support for the campaign.

CSIS, meanwhile, has used the threat of homegrown terrorism to demand and receive further powers from the federal government. Spurred largely by Islamic State and its effective (if gruesome) public relations campaign, the federal government recently tabled a bill granting more powers to Canada’s spy agency, making it easier for it to liaise with foreign spy networks in the U.S., the U.K., Australia and New Zealand. It will also be easier for the agency to track Canadians engaging in terrorist activities abroad. Amidst these reasonable-sounding powers is one giving blanket anonymity to CSIS informants. This means those charged under Canada’s security provisions may not be able to face their accusers.

There are multiple ironies in CSIS’s demands for more powers. First, Couture-Rouleau himself wasn’t about to leave the country, because the RCMP had already revoked his passport. As well, the RCMP had him under surveillance, and regularly visited his mosque in Saint-Jean-sur-Richelieu. If anything, Couture-Rouleau’s ability to mow down two soldiers with his car, and then die in a confrontation with police, speaks to an unfortunate aspect of intelligence gathering: it is next to impossible to predict who will turn murderous, and when.

Finally, there is this undeniable truth: Couture-Rouleau notwithstanding, Canadian police and intelligence agencies have done their jobs. RCMP Commissioner Bob Paulson recently told a House of Commons public safety committee that the force knows of 90 individuals who have either left the country to participate in terrorist activities, or were planning to. (Couture-Rouleau, Paulson acknowledged, was one of the latter.) RCMP and CSIS are tracking the remaining 89 people. Couture-Rouleau’s behaviour—including his online ramblings about the supremacy of Islam—was enough to get him noticed, but not arrested. Until he knowingly struck those soldiers, he hadn’t done anything criminal.

It may be tempting for some to blame Islam for Couture-Rouleau’s conversion from beer-drinking average Joe to kaffiyeh-draped murderer. Yet fundamentally he was a single and singularly troubled human whose apparent knowledge of his adopted religion amounted to bumper-sticker praises of Islam on Facebook. His parents fretted over him, his spouse denied him access to his son. His friends, even those he’d converted, drifted away when he began acting rash. His social circle tightened until there was all but one person left: Couture-Rouleau himself, alone with a handful of foreign Islamic Facebook friends to serve as his echo chamber.

Martin Couture-Rouleau was a textbook lone wolf—a man with a big mouth and nothing to lose. In this sense, he was less like the far-flung psychopaths of Islamic State than he was Richard Henry Bain, that other infamous Quebec-born loner. On Sept. 4, 2012, Bain strolled into a party for the Parti Québécois, which had just won the provincial election. He pulled a rifle from under his blue bathrobe and opened fire, aiming for premier-elect Pauline Marois. Instead, he killed a sound technician and severely injured another person. “The English are waking up,” Bain reportedly yelled as police led him away. He would later say in court that he’d been sent by Jesus to rid Quebec of “its separatist problem.”

For his part, Couture-Rouleau was infuriated by another political anomaly unique (in North America, anyway) to Quebec. Just over a year ago, the Marois government introduced the so-called “Quebec values charter,” which aimed to restrict the wearing of most religious symbols by anyone drawing a government paycheque. According to Quebec blogger Dominic Arpin, who interviewed several of Couture-Rouleau’s friends, the Muslim convert was apoplectic at such a thing. Judging by the ensuing election results, which saw Marois and the PQ lose power, the majority of Quebecers felt the same way. Yet Couture-Rouleau apparently took it as a personal attack—the confirmation of his blinkered belief that Western society was anti-Islamic.

It’s an absurd notion, of course, and further proof that lone wolves like Couture-Rouleau and Bain are ready to latch onto just about anything to make martyrs of themselves. The least we can do is not help them along in the process.