Maryam Monsef: There is no Liberal form of feminism. There is simply feminism.

On the heels of a social media debate between Status of Women minister Maryam Monsef and Conservative MP Michelle Rempel about the meaning of feminism, Maclean's asked both to write. Ms. Rempel was unable to file by deadline. Here is Ms. Monsef's submission. 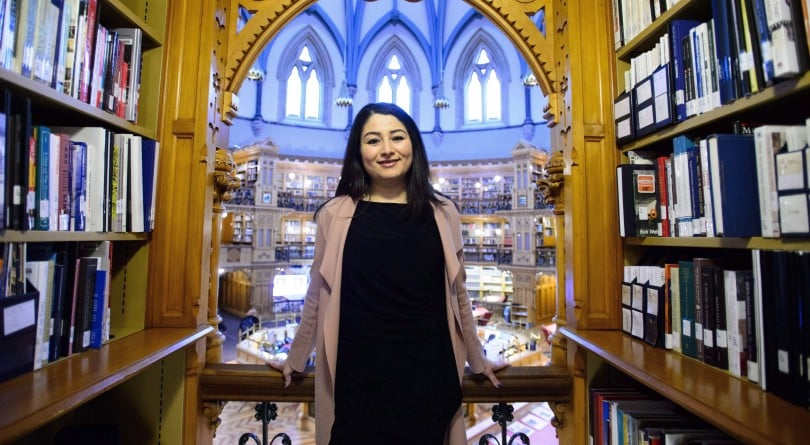 The Liberal government has given Status of Women Canada a major role to play in its feminist agenda and now that the federal agency is set to grow into a full-size department, it could also be changing its name. Minister of the Status of Women Maryam Monsef is pictured in the Library of Parliament on Parliament Hill, in Ottawa on Wednesday, Feb. 28, 2018. THE CANADIAN PRESS/Sean Kilpatrick

The internet can be a heated and ugly space for women, and I might argue, especially for female politicians. Even so, I was surprised when last week, on Twitter, a Conservative colleague told me to “grow a pair.”

Everyone knows what this piece of slang means: male anatomy is required to get the job done.

This kind of sexist language is all too prevalent in our society and does nothing to enrich the conversation about feminism—in fact, it’s an obstacle to equality.

Earlier last week, another Conservative colleague of mine, Rachel Harder—who happens to be the Official Opposition’s Status of Women critic—criticized what she referred to as the “Liberal form of feminism.” She made claims that it is “really wrong” for the Finance Minister to focus on creating more opportunities for women to enter the skilled trades and Science, Technology, Engineering and Math fields. Harder also reiterated her stance against women’s autonomy over their bodies and reproductive rights.

There is no “Liberal form of feminism.” There is simply feminism: the belief that all Canadians, regardless of gender–or political affiliation–deserve an equal and fair chance at success. And yes, we believe that reproductive choice is fundamental for women’s equal participation in society. We will always stand up for women’s right to choose.

How to best advance gender equality is such an important conversation to have. As a government, we are focused on rolling up our sleeves and ensuring more opportunity and fewer barriers to success for everyone.

We are elevating the voices of feminists in Canada and drawing on evidence based-research to make equality a reality–because we know it’s the key to Canada’s future. Grassroots feminist leaders have told us that increasing women’s participation in the workforce is essential, and that’s why we’re introducing historic proactive pay equity legislation. Our leading scientists have told us that we need to support women who want to pursue careers in STEM and entrepreneurship, and with Budget 2018’s investments, we showed that we heard them. Feminist community organizations across the country have told us that supporting early learning and childcare is vital to ensuring gender equality. That is why we have invested over $7 billion for early learning and childcare needs. And economists from around the world maintain that greater equality can bring billions of dollars into our economy over the next decade.

The women’s movement and feminist organizers in Canada are speaking truth to power, and we are listening. We introduced, and then strengthened, the Canada Child Benefit for families who need it most, especially single moms working hard to raise their kids. We’ve put 25% of Canada’s $40 billion dollar first-ever National Housing Strategy towards homes for women and their families. We’ve taken concrete steps to tackle gender-based violence and harassment, and so much more. In the three years since we formed government, we have lifted hundreds of thousands of families out of poverty, and Canadians have created hundreds of thousands of jobs.

These are not political gestures. These are transformative measures that will make a real difference in the lives of Canadians–today and tomorrow. That’s not “virtue-signalling”, as some Conservatives like to suggest–that’s creating economic opportunities and growth that benefits everyone by building a better Canada.

And this is just a start.

Feminism cuts across every issue, from the disproportionate violence Indigenous women and girls face, to the gendered impacts of poverty. Gender equality is the baseline for growing our economy and strengthening the middle class. This is about Canada—our future, our prosperity, our success.

Unfortunately, almost every time our government has put forward ideas and measures to advance gender equality and grow our economy, the Conservatives have voted against them. For a decade in government, they had the chance to grow the economy and make positive change for Canadians–and they failed.

Hurling gendered insults across social media and defining feminism along partisan lines only highlights the work that remains. We should all be working together regardless of political affiliation on such a fundamentally complex and important issue. This is not just the right thing to do, it is the smart thing to do–because we know gender equality benefits all of us.

Feminism is bigger than any one person or political party, and all of us have a place in shaping our country for the better. We know there is so much more to be done, and I encourage my Conservative colleagues to join with us and support policies that are helping to grow the economy and make meaningful change for all Canadians regardless of gender.

Let’s come together and collaborate for equality. We would be failing Canadians if we don’t.

Maryam Monsef is minister of status of women.