Author Bill Gaston has fibbed about being born in Flin Flon (and New Zealand, and Norway and more). How Flin Flon set out to make him an 'honest man.' 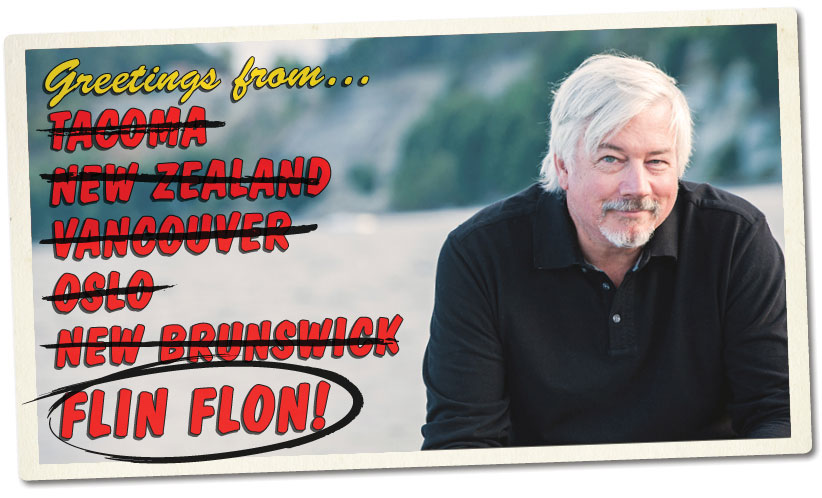 This isn’t fiction. It’d be too obscure to make up: who lies about being born in Flin Flon?

Bill Gaston can’t remember the first time he claimed the northern Manitoba mining town as his birthplace. It was probably 30 years ago, he guesses, long before he was one of Canada’s most acclaimed authors. But back then, if anyone asked, he might have said he was born in Canada, Norway or anywhere but his actual birth country.

At the time, he was trying to establish himself in Canada’s literary circles. He grew up in Winnipeg. He became a Canadian citizen in his teens. He just wasn’t born here. And while he couldn’t change that fact, he could make up someplace else if anyone asked. So he did.

Not even Gaston, a Giller Prize finalist and two-time nominee for the Governor General’s Literary Award for fiction, not to mention a former editor of Canada’s oldest literary journal and a professor of creative writing, could have scripted what that falsehood would bring him in 2018.

This is the real-life tale of one writer, his birther lie that endured for decades, and why a real Flin Flon native has embarked on a 2,200-km quest to make Gaston an honest man.

Gaston was born in Tacoma, Wash., on Jan. 14, 1953. Nine months later his family moved to Canada, first Vancouver, then Toronto, then Winnipeg, where Gaston spent most of his childhood. By the late 1960s, the Vietnam War was still going strong, and Gaston’s mom started to worry about the possibility of her boys being drafted to fight for Uncle Sam on account of their citizenship: they were still Americans by birthright.

“My brother was months away from getting his draft notice, and in two years I would get mine,” Gaston says. “It was such an absurd thought to be called to fight in a gross, completely unjust and ridiculous war for a country we didn’t even relate to against people we didn’t even know.”

Gaston’s mother took out Canadian citizenship herself so she could do the same by proxy for her boys. “We had to go down with her, kneel and raise our hand to the Queen and all that,” Gaston says. “I became a Canadian when I was 16.”

Gaston would just stay silent. He left America before he could even walk. He remembers nothing of his time there. He didn’t want to be an American. He didn’t even want to say he was born there.

No one cared much about Gaston’s roots until he became an author. His first novel was published in 1990 and several more came out within a few years. As he started to build a name for himself, someone from the world of Canadian publishing asked where he was born.

“So I said I was born in Flin Flon,” Gaston remembers. “It just came off the tip of my tongue.”

He knew of Flin Flon because his dad talked up his visits there with buddies to fish for pickerel. Gaston also remembered it being the hometown of Bobby Clarke, captain of the Philadelphia Flyers during their “Broad Street Bullies” era in the 1970s, a decade during which Gaston played varsity hockey at the University of British Columbia. “I was a pacifist defenceman during the Philadelphia era of hockey violence,” Gaston remembers. “So Clarke felt like my nemesis.”

But the main reason he said Flin Flon? “I love the name,” he says. “How do you not love that name?”

If Gaston had remained a relatively anonymous writer, this birther scandal would never have gotten much traction. But his third collection of short stories, Sex Is Red, received a glowing review from the Globe and Mail in 1998: “Bill Gaston deserves to dwell in the company of Findlay, Atwood and Munro as one of this country’s literary treasures.”

As Gaston’s fame grew, his fake birthplace of Flin Flon took root in media articles, the Canadian Encyclopedia and even the Bill Gaston fonds at Simon Fraser University.

“My spouse and friends know where I’m born. It’s not something I tried to hide. I just didn’t want to be thought of as an American—especially in Canadian literature,” Gaston says. “I just ignored it and hoped it would go away.”

It didn’t. With every new book he released came more favourable reviews, such as his second nod for a Governor General’s award in 2014.

Then, last year, the Winnipeg Free Press wrote an article about Gaston’s most recent book, A Mariner’s Guide to Self Sabotage. And in what had become routine for his chroniclers, Gaston was once again described as a “Flin Flon-born, Victoria-based” writer. Gaston let it slide. He’s not that famous an author, he figured, not like Margaret Atwood or Michael Ondaatje. Who would care?

Shortly after, he got a call from a reporter at the aptly named Flin Flon Reminder.

The article was supposed to be a simple story about Gaston’s roots.

“When did you leave? What did you do there? Who do you know?” Gaston remembers being asked by the reporter. “I just told him the truth.”

He confessed he was born in America. He only wished he could be from Flin Flon. “It was embarrassing,” Gaston says. “I used their town.” 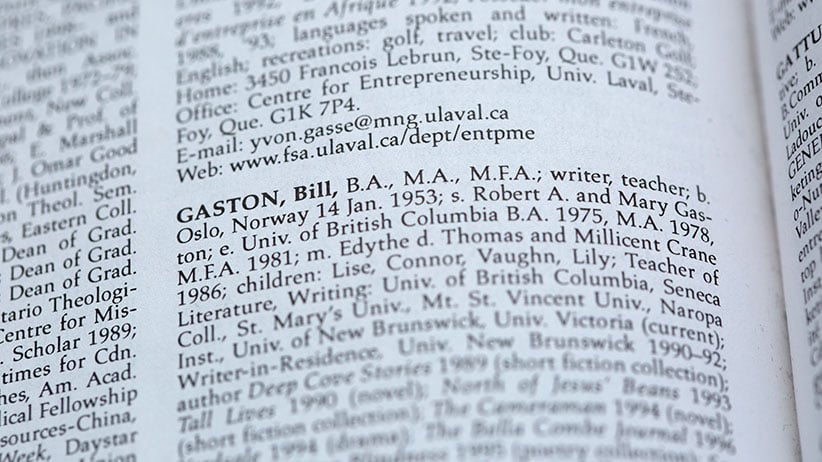 Bill Gaston’s entry in the 1996 Canadian Who’s Who, which listed his birthplace as Oslo, Norway

It was another Gaston fabrication. “I have no idea, or memory, of when I said Oslo, or if it’s anywhere else,” Gaston explained upon being told about his faux-Norwegian roots. “Clearly I didn’t want to be American.”

(Gaston was, indeed, born in Tacoma. He provided Maclean’s with a copy of his passport to prove as much. Maclean’s also confirmed his date and place of birth with the Tacoma-Pierce County Health Department.) 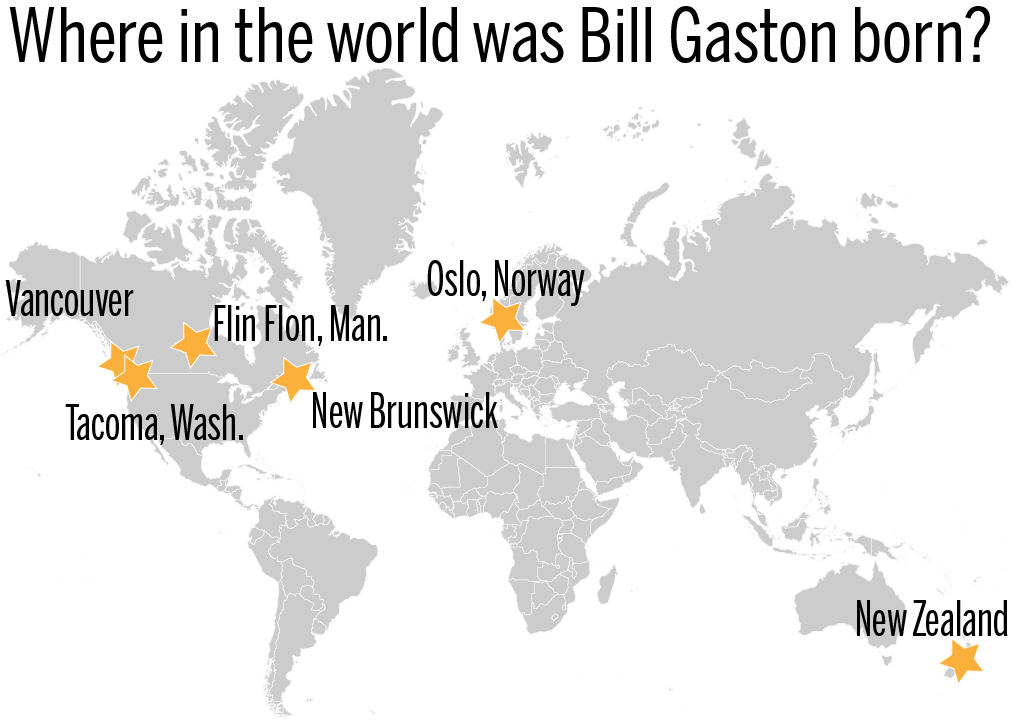 All the supposed birthplaces of Bill Gaston, including the real city where he was born: Tacoma, Wash. (Map by Terra Ciolfe)

The Reminder ran a story on Gaston’s real birthplace and, months later, a copy of that newspaper was still lying among a pile of papers in the kitchen of Flin Flon resident Greg East. He used the papers to start his wood stove, but when the article about Gaston’s Flin Flon fabrication found its way to the top of the pile, he set it aside. Months later, the article was back atop the pile. East reread the story, and balked again at burning it.

He couldn’t stop thinking about Gaston, a man he’d never heard of before—much less read any of his literature. “I thought if I’ve looked at the article that many times, I should do something about it,” East says.

He wrote a letter to Flin Flon’s city council in January with an idea: make Gaston an honorary resident. “Anybody who wants to be a citizen of Flin Flon so much that they said they were born here, they should be,” East says.

City council immediately jumped on board. They asked the social and recreation committee to make a proposal and, within weeks, Mayor Cal Huntley signed a certificate to present to their newest local. It reads: “Bill Gaston is hereby named honorary Citizen of the City of Flin Flon with all the rights and privileges appertaining thereto.”

And the certificate of honorary citizenship will soon be hand delivered to Gaston at his home in B.C.

“My wife and I are travelling to Victoria—just for something to do—in about 10 days,” East told Maclean’s in March. “Bill doesn’t know this yet. I hope he’s home, because we’re going to go present them to him.” They’ve since been in touch; Gaston is expecting East to arrive in early April.

Along with the certificate, East is also bringing Gaston a pin and miniature flag of Flin Flon, and a personal letter from the mayor. “The letter makes it clear that we’d like to make an honest man out of him, but by bestowing this honorary citizenship, there come some significant responsibilities,” says Huntley. “The responsibilities are he becomes an unofficial ambassador for the city of Flin Flon, and whenever he gets the opportunity, he speaks highly and promotes us.”

And he hopes that Gaston will come and visit Flin Flon one day. “If he comes here, he’ll probably be staying,” Huntley adds. “There’s at least another book here for him.” 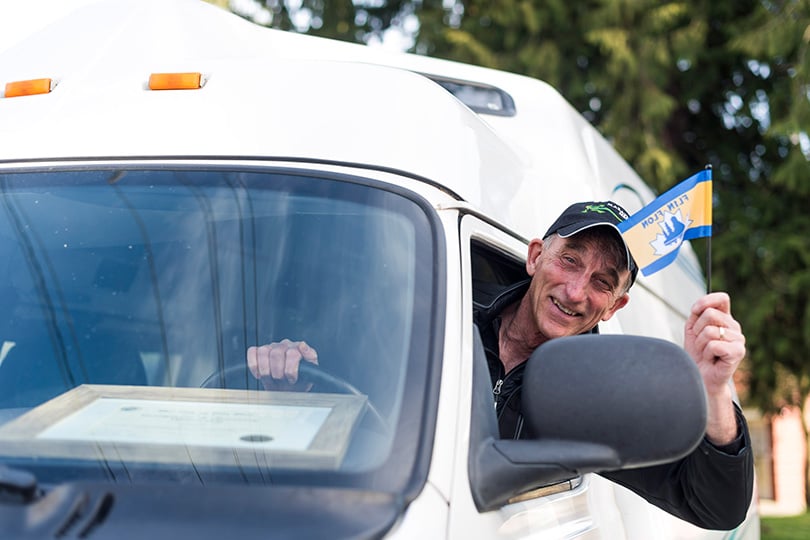 East takes a pit stop in Vancouver on his way to deliver the certificate of honorary citizenship to Gaston. (Photograph by Jimmy Jeong)

Gaston’s been doing a lot of research on Flin Flon since the Reminder exposed his fib, most notably on how to get there. He can’t just head there right now; he’s a professor with the University of Victoria’s writing department, so he’d have to wait until the semester is over. But Gaston figures if he gets an invite to the Winnipeg International Writers Festival this fall, he’ll add an extra flight north to check out his adopted roots for the first time in his life.

The more he reads up on Flin Flon, being an author and former hockey player, the more serendipitous it all seems.

For starters, Flin Flon was named after a character from the 1905 science-fiction novel The Sunless City: Josiah Flintabbatey Flonatin. A copy of the book was discovered by prospectors as they searched for mineral deposits in the area, so they named the place Flin Flon.

And on the ice, Flin Flon has produced an inordinate amount of NHL talent for a city with a population of less than 6,000: most notably Clarke, but also Eric Nesterenko, who happens to have been one of Gaston’s favourite players and a poet after his professional hockey career wrapped up.

Even Captain Canuck, the fictional superhero, was born in Flin Flon.

After decades of lying, Gaston can’t say he was born in Manitoba, but he now—truthfully—can call Flin Flon home. 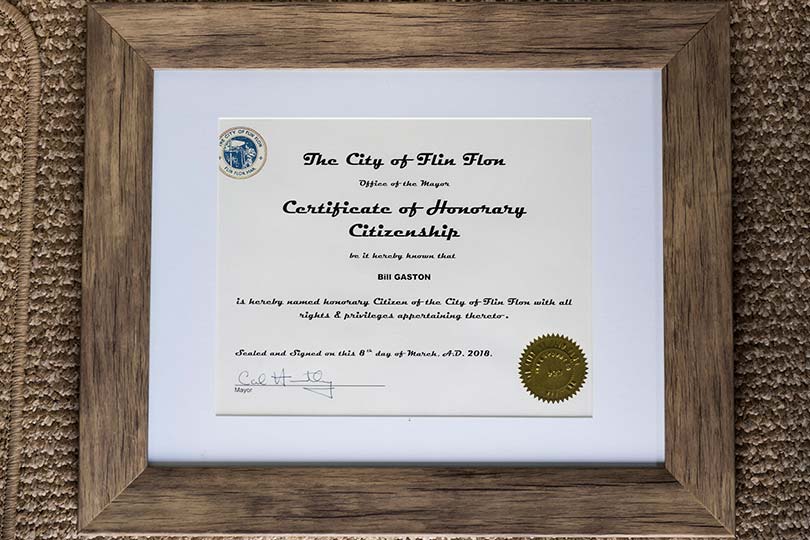 Bill Gaston’s certificate of honorary citizenship of the city of Flin Flon. (Photograph by Jimmy Jeong)