Mercy or murder? Or neither?

The defence of Capt. Robert Semrau 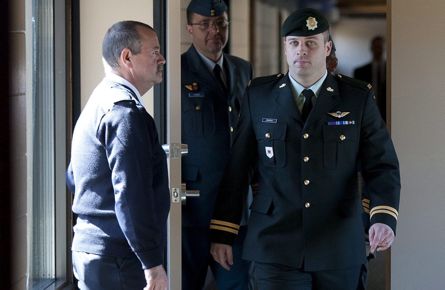 Despite the headlines (ours included), the murder trial of Capt. Robert Semrau is not a debate about the ethics of mercy killing. Not yet, at least. Yes, military prosecutors claim the 36-year-old officer encountered a severely wounded Taliban fighter on the battlefields of Afghanistan, and ended his agony with a pair of bullets to the heart. But Semrau himself has said only two words: “Not guilty.” He has never conceded that he killed out of compassion, and not once have his lawyers floated such an excuse. That is the government’s theory, not Semrau’s defence.

If the captain did choose to confess—and try to convince a jury that he did the humane thing—it’s hard to imagine a happy ending. Mercy killing, no matter the circumstances, is against the law, and second-degree murder carries a mandatory life sentence with zero chance of parole for ten years. In other words, Semrau’s two young daughters—including a new baby girl born just last week—would have to visit their father in a federal penitentiary.

Semrau’s lead lawyer, Maj. Steven Turner, refuses to discuss courtroom tactics with reporters. But if Wednesday’s cross-examination was any indication, his strategy is clear: attack every witness, and plant the seeds of reasonable doubt.

According to the government, Semrau subscribed to a so-called “soldier’s pact,” an unwritten code that says if one warrior is too maimed to be saved, it’s up to another to speed up the inevitable. Prosecutors also claim that two witnesses, including a fellow Canadian soldier, will testify that the captain fired his C-8 in the man’s direction, saying afterwards: “No one should suffer like that.” (The Geneva Conventions and the Canadian Forces Code of Conduct compel our troops to provide First Aid to all casualties, friend or foe.)

But to convict Semrau of murder, the Crown must first prove—again, beyond any reasonable doubt—that someone was actually murdered. The body of the alleged “victim” has never been recovered, and there is no forensic proof that Semrau’s rifle ended his life. Even the man’s name is a mystery.

Adding to the uncertainty is Warrant Officer Merlin Longaphie, the first Canadian soldier to stumble across the Taliban fighter. It was Oct. 19, 2008, and like Semrau, Longaphie was part of a four-man Operational Mentor Liaison Team (OMLT) attached to a company of Afghan National Army troops trolling for Taliban in Helmand Province. His unit was under heavy fire, and as U.S. Apache helicopters pounded the enemy position, Longaphie sprinted to safety through a large cornfield and flopped onto his stomach. To his right, about 25 meters away, was a man with a severed foot, a missing leg and a gaping hole in his back “the size of a dinner plate.”

“I came to a quick conclusion, given that I didn’t see any movement and the ANA (Afghan National Army) didn’t seem to have any concerns,” Longaphie testified Wednesday. “My natural instinct was to say: ‘This is a dead guy.’ ”

Turner suggested that the unnamed fighter was directing the enemy assault from a treetop, and was knocked from his perch by one of the Apache choppers. Longaphie said he did see what looked like blood in a nearby tree, but when asked whether intestines or other body parts were also visible, he wasn’t certain.

“You’re not going to render assistance because this person is dead?” Turner asked.

“Correct, sir,” Longaphie answered. “I didn’t feel there was a need to get a closer look.”

If the Crown is correct, Semrau saw the same body later that morning—and it was still breathing. Pte. Steven Fournier, Semrau’s fire team partner that day, snapped photos of the wounded man, and is expected to testify in the coming days that he was indeed alive. But that Longaphie says otherwise presents an unexpected hiccup for the Crown. Capt. Thomas Fitzgerald, the lead prosecutor, was rattled enough to re-question Longaphie about his recollection of events.

“I didn’t see any evidence to indicate that he wasn’t dead,” Longaphie insisted. “But I didn’t go and check.”

Semrau’s lawyer spent the day trying to exploit other potential holes in the government’s case. He suggested that because the OMLT members were attached to an Afghan company—and not in charge of it—they had no authority to overrule a local commander’s decision (including a decision to not offer medical treatment to a dying man). Court has already heard that one ANA commander saw the injured insurgent, declared that his fate was “in Allah’s hands,” and ordered his troops to keep moving.

Turner also went to great lengths to point out the obvious: war is hell.

“You were out in Helmand to find, fix and destroy their enemy forces?” he asked Longaphie.

“They were able to fight you head to head as an organized group?”

“And they were able to organize and execute complex ambushes?”

At one point, Longaphie recalled how a flurry of bullets smacked into a mud wall right behind him, just inches from his face.

“Would it be fair to say that throughout this operation there was complete chaos?” Turner asked.

Turner also foreshadowed what is certain to be a dramatic courtroom showdown with one of the Crown’s star witnesses: Pte. Fournier. It was Fournier who snapped those photos of the Taliban casualty moments before the alleged execution, and who later told military investigators that Semrau committed a mercy kill. “Turn around,” the captain allegedly told him. “You do not or should not have to see this.” (The other eyewitness, an Afghan interpreter nicknamed “Max,” is expected to testify that he bolted back around just in time to see the second bullet pierce the unarmed man.)

Answering Turner’s questions, Longaphie described Fournier as an unmotivated, out-of-shape “loner” who preferred video games over physical training. Longaphie said he tried more than once to have the private kicked off the tour, but Semrau seemed to have a soft spot for him. He even offered to craft a diet and exercise plan for Fournier, and act as a personal trainer of sorts. “Capt. Semrau thought we could salvage him and not get rid of him,” he testified.

He was wrong. “He always seemed to have an excuse,” Longaphie said. “He had a hard time achieving even ten push-ups.” During a leave of absence weeks before deploying, Fournier gained even more weight, and once in Afghanistan he had trouble keeping up with his comrades. Once, while others scaled a mud wall, Fournier walked around alone, trying to find an easier way to the other side.

“Fournier was a risk to himself and the rest of the group?” Turner asked.