My hitchhiker, the Parliament Hill gunman

From 2015: On his way from Vancouver to Calgary, Harry Bekkering decided to pick up a clean-shaven man looking for a lift. His name was Michael. 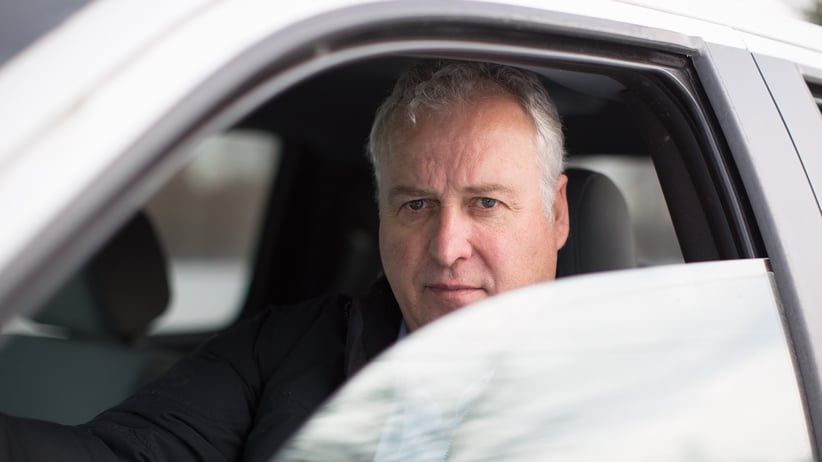 Before he left Vancouver, Harry Bekkering bought two Cuban cigars for the road. He was heading home to Calgary, a 10-hour drive, and figured a couple of fine Havanas would help pass the time. It was Sept. 23, 2014, a Tuesday afternoon. “A beautiful, sunny day,” he recalls. “Just gorgeous.”

An agricultural consultant who helps farmers sell their products, Bekkering is no stranger to the western half of the Trans-Canada Highway. Now 57, he can’t even begin to guess how many kilometres he’s clocked over the years, hands on a steering wheel. Once in a while (despite the worries of his loving wife), he’ll stop for a hitchhiker. “Especially young people,” he says. “You know, we were young once.” If nothing else, the drifters are welcome company on a numbing stretch of road.

An hour into his trip, just outside Chilliwack, Bekkering spotted a man looking for a lift. Clean-shaven, the hitchhiker had long black hair, tied back in a bun, and a large duffle bag, red and grey. Bekkering pulled his white pickup to the shoulder and waved the stranger inside.

“Where are you going?” Bekkering asked.

“Calgary,” answered the man, wearing blue jeans and a T-shirt.

“This is your lucky day.”

The new passenger introduced himself as Michael. Just Michael.

Exactly one month later, Bekkering watched in horror as the RCMP released surveillance footage of the Ottawa gunman—Michael Zehaf-Bibeau—who murdered Cpl. Nathan Cirillo at the National War Memorial before storming Parliament Hill and perishing in a hail of bullets. The killer on the screen was the same Michael who, only four weeks earlier, sat in the front seat of Bekkering’s Ford F-150 as it weaved east through British Columbia’s mountains. “I knew right away it was him,” he says. “My thought was: ‘That little s–t.’ I was really shook up, and I was angry.”

Working in Regina when the news broke, Bekkering drove to the local RCMP detachment to tell police what he knew. “To me, he was just a lost soul,” he says now. “There was no joy in his conversations. Nothing.”

Related reading: Bearing Witness: The story of Oct. 22 as told by those who were there

As investigators continue to piece together Zehaf-Bibeau’s final movements, a portrait of the shooter—and his life of many contradictions—continues to emerge. Petty criminal. Well-paid construction worker. Devout Muslim convert. Homeless junkie. Taliban sympathizer. Just days before he climbed into Bekkering’s truck, Zehaf-Bibeau was staying at a shelter in downtown Vancouver, ranting about the “arrogance and debauchery” of the west and passionately defending the atrocities committed by Islamic State militants in Iraq and Syria. “He said he has to fight the injustice of foreign intervention in Muslim regions,” one fellow resident, Paul Jarjapka, previously told Maclean’s. The RCMP has already concluded that his crime was a terrorist attack, saying police have “persuasive evidence” that Zehaf-Bibeau was “driven by ideological and political motives”—including a recorded message, still unreleased, where he reportedly criticizes Canada’s foreign policy and praises Allah.

But of all the people who crossed his path in the weeks before his rampage, few had a longer, more intimate exchange with the would-be killer than Harry Bekkering. They sat together for hours, side by side, staring out the same windshield. “It’s like being on an airplane,” he says. “You talk to the guy next to you. You’re never going to see him again, so you can talk about certain things.”

Yet even now, after digesting all that’s happened—and searching his memory for potentially missed clues—Bekkering is left with many more questions than answers. “Who knows what was in his heart?” he says. “What he did was heinous, but he was still a human being.”

The Michael he met was clearly lonely and deeply religious, a handsome but guarded man who only perked up when the discussion turned to his faith, including his desire to move to Libya, study the Quran and find an obedient wife. He said gay people were “disgusting,” that he was Arabic—not Canadian—and that Islam rescued him from drugs (even though it clearly hadn’t). As fanatical as he sounded, however, Michael offered no glimpse of the violence he would soon unleash, Bekkering says. Not once did he mention terrorism or jihad. “There were no red flags, no indication at all that he was going to do what he did,” he says. “My wife and I have cried about it: ‘Why did he do that? Why couldn’t I have said something to change his mind?’ ”

Born in Holland, one of 13 children, Bekkering was three when his family immigrated to Alberta in 1959, 14 years after Canadian troops liberated his nation from Nazi Germany. An infinitely proud citizen of his adopted country, he likes to tease Canadian-born friends that he’s actually more Canadian than they are—because his parents chose to come here. His passenger, it turned out, was hardly so proud.

“Michael said he lived a pretty wild life,” Bekkering says, recalling the early moments of their ride. Booze. Hard drugs. Repeated arrests. He said his favourite drink was Johnnie Walker Blue Label, and that he once went to jail for stabbing a man who hit on his stripper girlfriend. He talked about his Libyan-born father and his lawyer mother, a senior bureaucrat at the federal Immigration and Refugee Board. “He said it was devastating for him that his parents divorced when he was younger.” After moving west from Montreal and shunning his mom and dad, Michael said he earned a good wage in both the Alberta oil sands and on various construction projects in B.C.

“He talked about his conversion to Islam, and that he didn’t need drugs or alcohol anymore,” Bekkering says. “I said: ‘You know what, Michael? Good for you.’ ” (In truth, Zehaf-Bibeau was still very much an addict. He was seen smoking crack cocaine in the days before hitching his ride to Calgary, and is believed to have continued using right up until the week of his attack.) As they drove toward Kamloops, Bekkering rolled down the window and lit his first cigar.

Later, during a rest stop at McDonald’s, Michael offered to pay for their meal: a Big Mac for the driver, and a Filet-o-Fish for him. “I asked him why he didn’t have a burger,” Bekkering says. “He said it wasn’t halal.” Back in the truck, Michael reached into his bag and pulled out an expired Libyan passport, explaining, with obvious pride, how he had visited his father’s homeland. “He told me: ‘The passport is valid anywhere in the world except for the occupied state of Palestine,’ meaning Israel,” Bekkering says. “Then I asked him: ‘Are you Canadian and Libyan?’ He said: ‘No, I’m Arabic.’ ” (Police now know that as soon as Zehaf-Bibeau arrived in Ottawa, nine days after meeting Bekkering, he tried to renew that Libyan passport; the embassy refused, scuttling his travel plans and potentially shifting his focus to the Parliament plot.)

For Bekkering, the passport marked an uncomfortable turn in their conversation. He pressed Michael about why he needed to find a wife outside Canada. “He said he wanted someone who respected him and wouldn’t go out in public unless she was with an immediate family member.” When Bekkering told him the condominium he owned in Vancouver (the same one he had left earlier that morning) was in a neighbourhood with a large gay community, Michael was appalled. “He said: ‘I don’t like gays. It’s disgusting,’ ” he recalls. “I said: ‘You’ve got to be more respectful. What is the matter with you?’ I wouldn’t let him get away with that.”

Bekkering was stunned. A father of three (and a grandfather of three), he was sitting beside a young man the same age as his son, spewing fundamentalist babble. “It was disturbing,” he says. “How can a man born and raised in this country be so radicalized?”

When Bekkering sparked up his second cigar, Michael lit a cigarette. “He said: ‘Oh, I feel so bad. I shouldn’t be smoking,’ ” Bekkering recalls. “I said: ‘Michael, just relax.’ ” At one point, their discussion shifted to Canada’s looming contribution to the fight against Islamic State; Bekkering broached the topic, not Michael. “I said: ‘I don’t know what’s going on, but I am concerned about Canada, that there is no backlash. I hope everything is OK.’ He said nothing. No response.”

As they approached Calgary, the sun long set, Bekkering asked Michael if he needed any money. He didn’t—he had $2,000 in cash, he said—and asked to be dropped off on the outskirts of the city. He had a tent stuffed in his bag, and his plan was to camp as he continued his hitchhiking trek to Ottawa. Bekkering insisted on driving him to a homeless shelter instead.

They arrived at midnight. Bekkering shook Michael’s hand, wished him luck, and headed home. “My life will never be the same,” he says now.

Bekkering told his wife, among others, about the strange man he met. “I actually said I wouldn’t be surprised if he joined [Islamic State] because he was so radical in this thinking,” he says. Again, Michael didn’t appear violent, but his fanatical views on religion, women, homosexuality—and his desire to get overseas—left Bekkering wondering about his true intentions. Never, though, did he consider him a threat, or feel the need to warn police.

A month after the shooting, Bekkering still struggles with feelings of guilt. Should he have spotted a warning sign? Was Michael already planning his attack when he climbed into the truck? Or did his inability to secure a passport, either Libyan or Canadian, push him over the edge? “Through the whole trip, there wasn’t one laugh,” Bekkering says. “There wasn’t a smile. There was no joy. It was a totally one-sided conversation. He didn’t even ask me one question about anything.”

Michael was lucid and alert, he says, and didn’t appear to suffer from a serious mental illness. But he was oddly distant, clearly vulnerable—in hindsight—to the kind of Islamist brainwashing that ultimately took hold. “That is what bothers me the most: the perverse ideology of preying on the weak who are looking for something,” Bekkering says. “There was a big vacuum in his life. He was a loner. That vacuum could have been filled by anything.”

Bekkering has grappled with so many different emotions over the past four weeks, all from a completely chance encounter. He is heartbroken for Cpl. Cirillo’s family—and for Zehaf-Bibeau’s. He is disgusted that some mosques were vandalized in the days after the attack. And he is more grateful than ever for the rights and freedoms he enjoys, and those in uniform willing to die for those rights and freedoms.

If anything, the events of Oct. 22 have reminded him that he—and every other Canadian—should care a little more about the strangers they pass. “We don’t do enough for each other in this country,” Bekkering says. “People say I was a Good Samaritan because I picked him up. But at the end of the day, if I was a Good Samaritan I would have known a little more about this guy and followed up. I would have given him my phone number and said: ‘Hey, if you’ve got an issue, give me a call tomorrow.’ ”