'In my mind, Nathan will be standing on guard for us always'

Cpl. Nathan Cirillo, gunned down while standing guard at the National War Memorial in Ottawa, is laid to rest 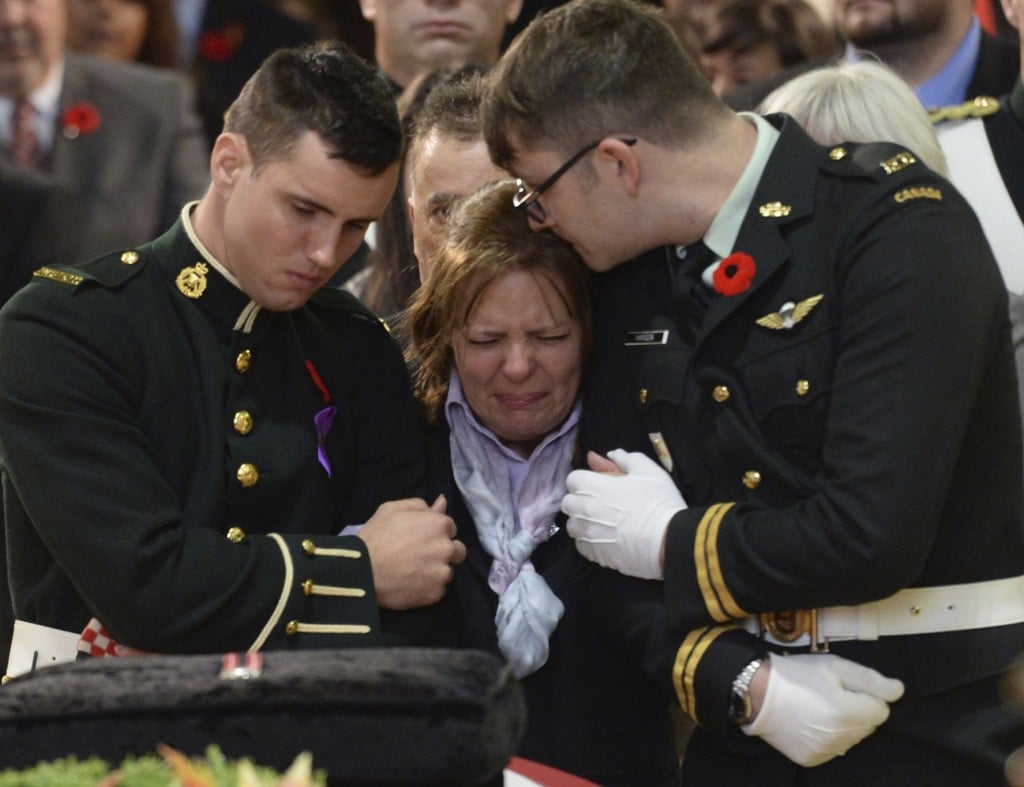 Kathy Cirillo is comforted at the regimental funeral service for her son, Cpl. Nathan Cirillo, in Hamilton (Nathan Denette/CP)

On Oct. 28, a sparkling, sunny morning, Canada bid farewell to Cpl. Nathan Cirillo, who was gunned down while standing guard at the National War Memorial in Ottawa.

In Cirillo’s hometown of Hamilton, where he was laid to rest, crowds lined up five feet deep along the route of the procession carrying Cirillo’s coffin—borne by members of his regiment, the Argyll and Sutherland Highlanders, in their dark kilts and checkered socks—to the city’s Christ’s Church Cathedral, where Cirillo’s full regimental funeral was held. Some wore red and white, others carried homemade signs and cardboard poppies, forming a river of sorrow, and of pride.

Karic Francella, who has been friends with Nathan since they were nine years old, rolled up his sleeve to reveal a fresh tattoo on his forearm: an outline of the now ubiquitous image of Cirillo in front of the War Memorial. “In my mind, Nathan will be standing on guard for us always. No matter what, he will be there.” Master Cpl. Mike Hillary, who trained Cirillo at CFB Petawawa, said he was a remarkable man who would have given you the shirt off his back if you needed it.”

At the First Ontario Place, where the public was invited to view the funeral by video feed, snipers sat stationed on the arena roof. Local fire trucks hoisted a giant Canadian flag into the air. Some clapped for the Argylls, as they marched past. Others simply stood and cried. “When one falls, we all stumble,” said Deborah Auger of Chatham, Ont.

To those gathered in Hamilton, the ugly violence in Ottawa last week seemed a world away. Calls for vengeance and political action were snuffed out by the sombre echo of the muffled drums. It was time, now, to mourn, to weep, to heal.

Cirillo’s mother, Kathy, marched arm-in-arm with Cpl. Branden Stevenson, Cirillo’s best friend, who had been standing next to him in Ottawa when he was shot. She wept throughout, as Stevenson held and steadied her. Marcus, Cirillo’s blue-eyed son, stood directly behind them, gripping a Canadian flag, awed, honoured, and a bit confused by the day’s pomp and ceremony. Occasionally, Marcus, who began kindergarten last month, would lift his arms skyward, signalling to his aunt to pick him up; there, he nuzzled against her, resting his head on her shoulders.

Prime Minister Stephen Harper and his wife, Laureen, were among a host of dignitaries bidding farewell to Cirillo, 24. It was a “gut-wrenching” irony that Cirillo was killed guarding the Tomb of the Unknown Soldier, said Harper. “These monuments remind us that freedom isn’t free. It has been earned by the soldier and then donated by all of us.”

“You have made a difference,” said Rev. Douglas Crosby, Roman Catholic bishop of the diocese of Hamilton, echoing the Prime Minister. “Your sacrifice is not in vain.”

But, to his family, Cirillo was “a kid at heart,” said his cousin Jenny Holland, recalling Cirillo’s infectious laugh and boundless energy.

If there was a lasting memory of the day, perhaps it was of Marcus, wearing his father’s Glengarry cap, struggling to match the slow, dramatic marching steps of the Argylls ahead of him. For, while the entire country was in mourning today, in the end, no one has lost more than that little boy. For Cirillo, whose face used to light up when he spoke of Nathan, who loved his son like a best friend, no one had mattered more.

May Marcus “find comfort in the fact that our entire country looks up to his father with pride and respect,” said Harper. 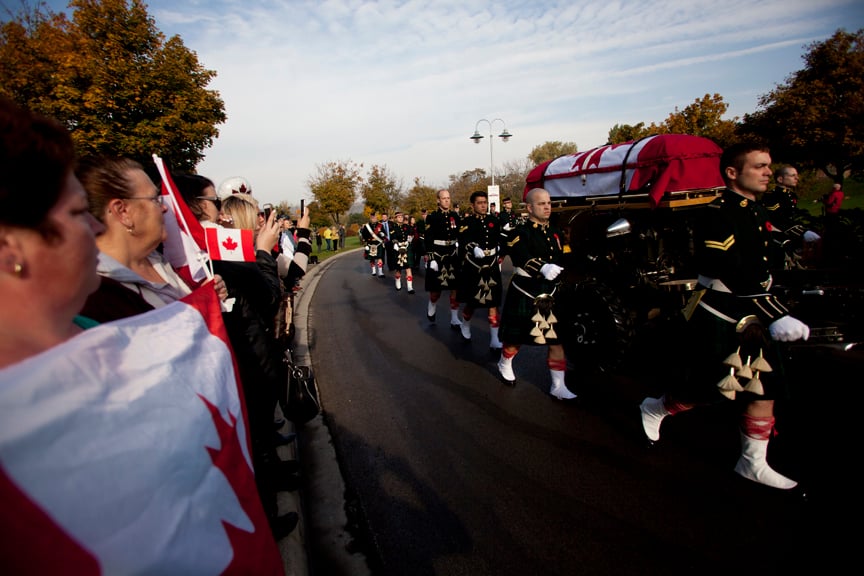 The body of Cpl. Cirillo is carried through the streets of Hamilton on Tuesday (Photograph by Colin O'Connor)