Even many second-generation immigrants earn much less than native-born workers. How speaking English impacts wages. 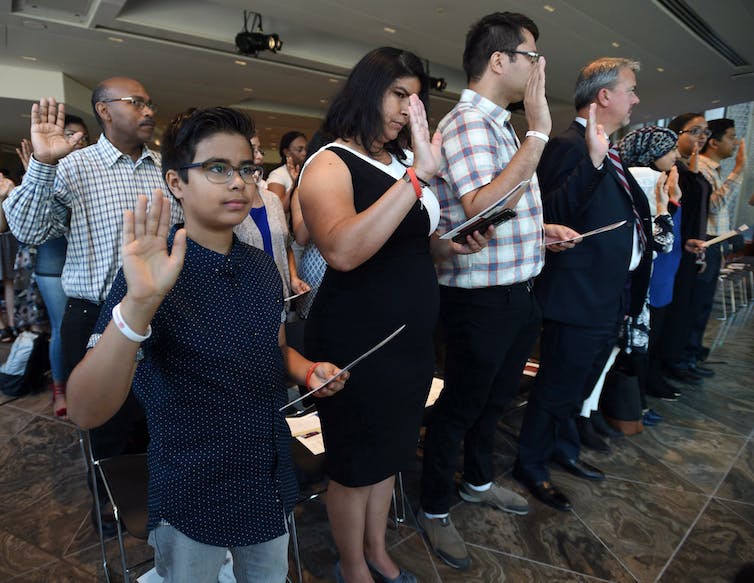 Statistics Canada has released new data from the 2016 census that shows more than any other G8 country, Canada is a nation of immigrants. One in five Canadians (21.9 per cent to be exact) were born in another country.

Immigration is a significant component of Canada’s population growth and evolving demographic composition. The census data shows more than 1.2 million new immigrants came to Canada between 2011-16. Immigrants are also typically younger and more educated than the average Canadian.

Not surprisingly then, immigration is often touted as a necessary condition for sustained economic prosperity. And yet in spite of their ostensible importance to the Canadian economy, immigrants themselves have yet to catch up to other Canadians in terms of economic outcomes.

READ: Why the world’s best and brightest struggle to find jobs in Canada

Economists refer to this catching up as “economic assimilation” and often measure it using the “native-immigrant wage gap” — the difference between the average wages of immigrants and those whose families have been here at least three generations. The persistence of this wage gap is a feature common to economies in the Western world that rely heavily on immigration.

As an economist and a child of immigrants myself, I was curious to delve into the census data to understand how this gap has evolved over time and across major cities in Canada — and to get a hint of what may be at the root of it.

The first thing that surprised me is the gap has not changed much over the past 10 years. Census data from 2006 showed, at a national level, first-generation immigrants earned wages 12.6 per cent less than the average wage of native Canadians. In 2011, the gap dropped slightly to 10 per cent, but the new census data shows it’s climbed significantly to 16 per cent. 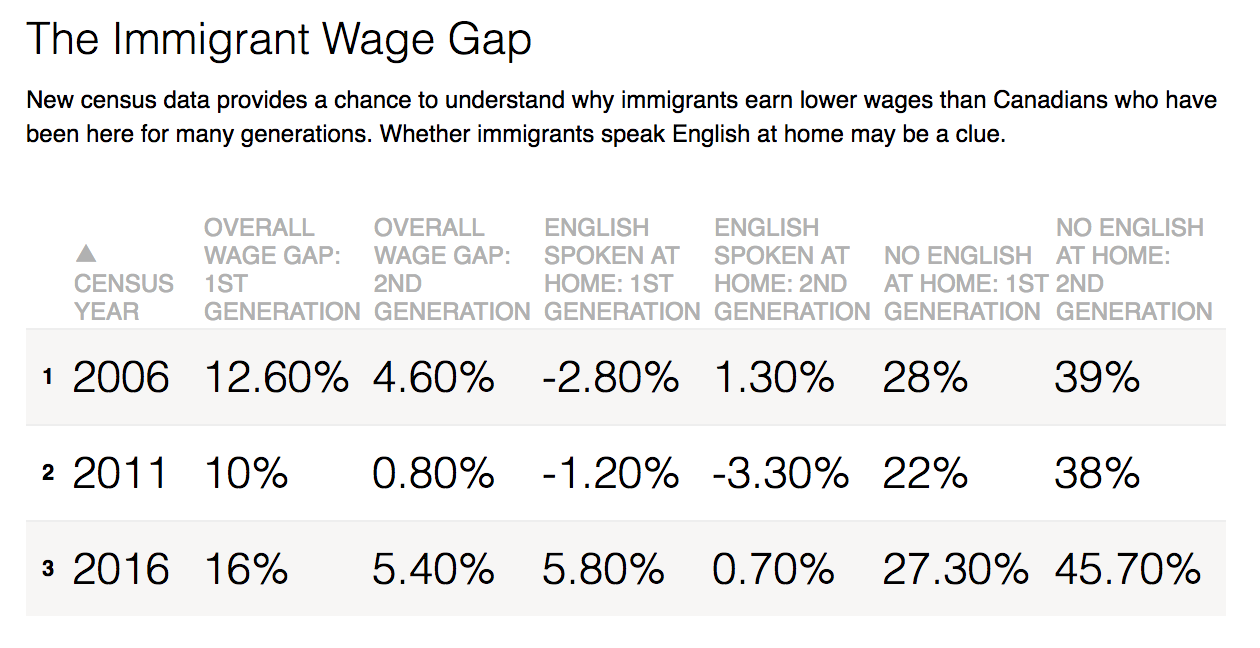 Importantly, the gap is a countrywide phenomenon. Looking at the three of the most popular destinations for immigrants in the past decade — Toronto, Vancouver and Calgary — the gap in 2016 sits at 25, 17 and 23 per cent respectively.

The obvious question that follows then is: What is the source of these gaps?

Canada is an especially interesting case given the “points” system used to screen potential immigrants, where language, education and job skills are key determinants. And for the first time, the census has reported that about six out 10 new immigrants came here under the so-called economic admission category, meaning they have the skills “to enhance and promote economic development.”

Given the way immigrants are screened before entry, one would expect relatively quick integration into the Canadian economy and a convergence in wages. But this is clearly not the case.

In the former, employers use observable traits (such as race) to make inferences about something like productivity. For example, an employer sees a job applicant with brown skin. The employer isn’t prejudiced towards brown people, but is worried (stereotypically) the employee is going to want to take trips “home” to Sri Lanka and would need a lot of vacation time. So the employer hires someone else equally qualified. Taste-based discrimination is more what we think of as prejudice — not wanting to hire someone purely because of skin colour.

Identifying causal factors that explain the wage gap is a difficult task – individuals who immigrate to Canada do so by choice. These choices are a function of a host of factors that could potentially jointly explain the decision to immigrate and labour market outcomes, including personal characteristics, job experience and education, to name just a few. Identifying discrimination in the labour market, and separating between taste-based and statistical discrimination, is even harder.

However, a 2011 study by University of Toronto economist Phil Oreopolous takes an important step in this direction.

When the author followed up with some of the recruiters, the overwhelming reason given for overlooking resumes with a foreign-sounding name was that they anticipated difficulty with language. Specifically, recruiters expected a lack of fluency in English, problems with communicating at work and difficulty for customers and co-workers in understanding a foreign accent. In other words, recruiters were statistically discriminating between job candidates based on their names.

Can language proficiency close the gap?

The census presents an opportunity to study the importance of English proficiency for the gap in labour market earnings between immigrants and native Canadians in 2016. The census provides information on wages, immigrant (and generation) status, as well as the language most commonly spoken at home.

Specifically, guided by the findings in Oreopolous’s study, I looked at how the gap in average wages changes when English is spoken at home. (For the purpose of this study, I looked at communities outside of Quebec, where French is the dominant language.) In 2016, 63 per cent of new immigrants living outside of Quebec most often spoke a language other than English or French while at home.

This pattern also holds in the major metropolitan centres in the English-speaking parts of the country, which attract the most immigrants.

Interestingly, at almost 25 per cent, Toronto has one of the largest city level wage gaps in the country, explained at least in part by the fact that new immigrants tend to land in Toronto first and are more likely to be unemployed for a period of time. The three largest cities in English-speaking Canada, which also attract the most immigrants, also have gaps larger than the national average.

In Ottawa, immigrants of either generation who speak English at home actually earn more than natives on average. While it may be tempting to attribute the major differences across the cities to differences in culture, they are more likely due to regional differences in industrial composition and attendant labour demand. 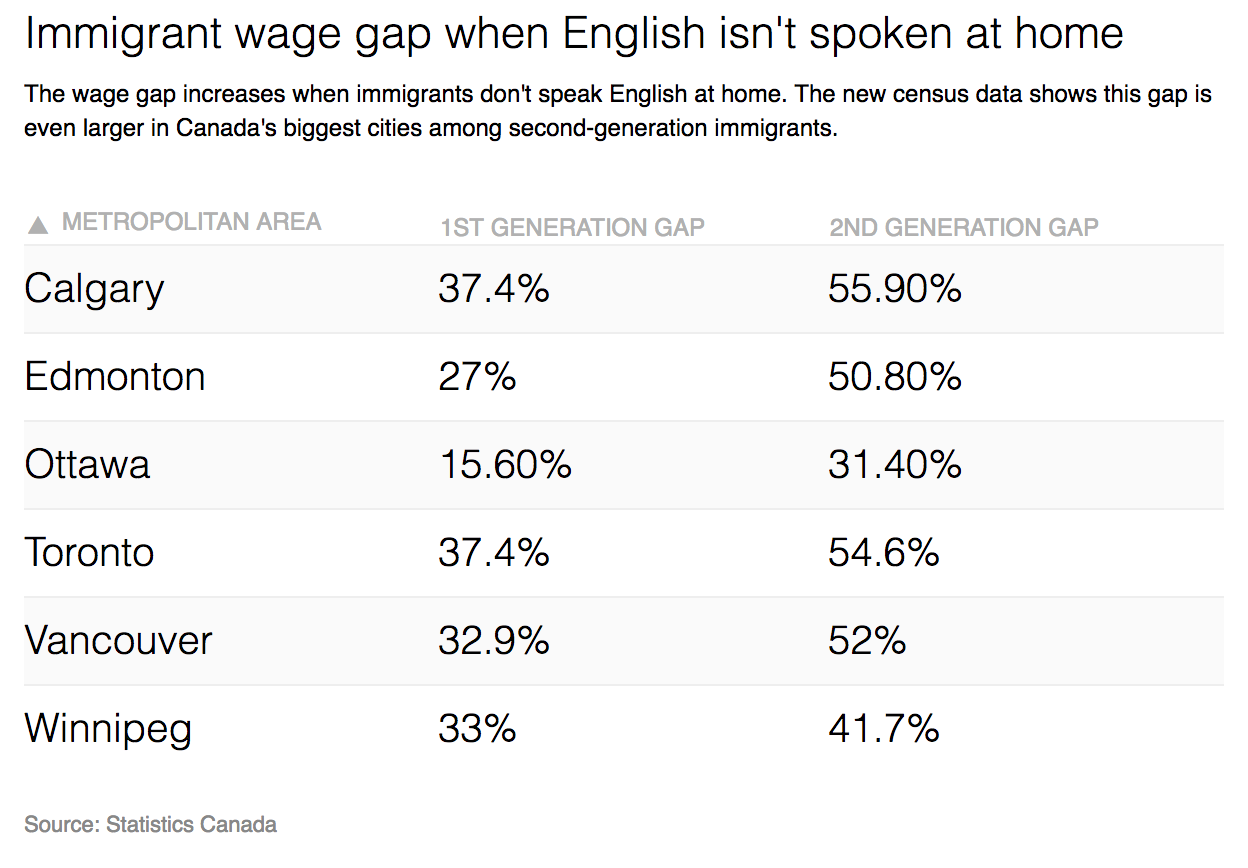 Though these patterns are striking, they should not be interpreted as causal – immigrants can’t necessarily start speaking English at home and expect to see their future earnings increase. There are unobserved qualities of individuals that may correlate both with the tendency to speak English at home as well as with labour market earnings potential. Without holding these fixed in some way, we can’t say whether there is a causal relationship between English skills and the gap in labour market outcomes.

But supposing that the findings here are suggestive of a causal relationship, why does speaking English at home matter so much?

One obvious answer is that individuals who speak English at home speak better English in general — and this would mean better communication at work. This would be consistent with the worries that the recruiters in Oreopolous’s study had when deciding who to call back. Or perhaps individuals of foreign descent that speak English at home tend to have other important skills on average.

But another possibility is the labour market discriminates against individuals with weaker English skills even when English is not important for productivity. Sorting between these different explanations (and others) will require more data and a deeper look.