Restrictions on vaping, much bigger wood buildings, dogs on patios and more 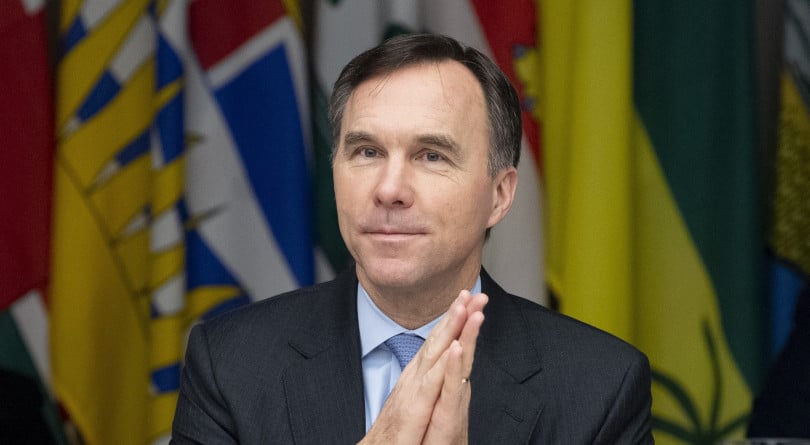 Minister of Finance Bill Morneau waits to begin a meeting with federal and provincial counterparts, on Dec. 17, 2019, in Ottawa (Adrian Wyld/CP)

Most federal, provincial and territorial laws come into force immediately after their passage and assent, however, legislation requiring greater planning or notice is typically delayed to allow affected parties time to prepare. Here are 46 new laws that come into effect across Canada in 2020, which will change the county the in ways both big and small. They include multiple provincial efforts to address youth vaping, regulations requiring Alberta schools  to have EpiPens, an end to banning dogs from restaurant patios in Ontario, and a building code change allowing 12 story wood buildings.

Greenhouse Gas Pollution Pricing Act (Canada)
After repealing its provincial carbon tax on June, Alberta will fall under federal laws for jurisdictions that either did not adopt Prime Minister Trudeau’s carbon pricing system or failed to develop their own pricing plan. The legislation institutes a fee on carbon pollution and offers tax rebates to individuals and families to offset extra costs.

The People’s Health Care Act, 2019 (Ontario)
Scraps out-of-country health care coverage for emergencies—up to $400 per day for inpatient services and up to $50 per day for outpatient and doctor services. The Canadian Snowbird Association is challenging the decision in the courts.

Better for People, Smarter for Business Act, 2019 (Ontario)
Ontario bars and restaurants will have the option of allowing dogs on patios where “low-risk foods” are served. “Cutting red tape … is also about giving Ontarians the freedom to pursue the things that matter to them—like enjoying Sunday brunch with a four-legged member of the family,” said Prabmeet Sarkaria, Associate Minister for Small Business and Red Tape Reduction.

Budget Implementation Act, 2019 (Canada)
Removes current preferential treatment allowing stock options received at fair-market value to be taxed at half the benefit. Now, employees receiving options for Canadian-controlled private corporations (CCPCs) as well as start-ups and emerging firms, enjoy the same treatment, but those with options from non-CPCCs can only claim the first $200,000.

Act to amend the Canada Business Corporations Act (Canada)
Public corporations incorporated under the CBCA are required to report diversity of directors and senior management. Designated groups are women, Indigenous persons, members of visible minorities and persons with disabilities.

Act respecting First Nations, Inuit and Métis children, youth and families (Canada)
Provides Indigenous governments jurisdiction over child and family services with an overall goal of reducing the number of children in care. Establishes practices, including best interests of the child and cultural continuity, to guide provision of services.

National Building Code of Canada 2020 (Canada)
Changes to the Building Code allow developers to construct wood buildings up to 12 stories in height. New rules double the height for buildings where the primary load-bearing structure is composed of solid or engineered wood.

Measurement Requirements for Oil and Gas Operations (Alberta)
To meet federal requirements under the Canadian Environmental Protection Act, Alberta’s energy regulator now requires companies to measure, monitor and report methane releases. In 2018, the province committed to reduce methane emissions from upstream oil and gas sites by 45 per cent from 2014 levels by 2025.

Technology Innovation and Emissions Reduction (TIER) regulation (Alberta)
The new rule set a $30-per-tonne price on carbon for industrial emitters, such as oil sands facilities, to meet federal requirements for levies on carbon pollution. The price will rise to $40 per tonne in 2021 and $50 per tonne by 2022.

Protection of Students with Life-threatening Allergies Act (Alberta)
School boards must establish anaphylaxis policies that reduce risk of exposure, communicate information to students and parents, train employees and maintain files for anaphylactic students, among other tasks. Schools must have EpiPens on site.

Tobacco and Vapour Products Control Act (British Columbia)
Sales tax on vaping products increased from 7 to 20 per cent. In the Spring, regulations on vaping products require vaping packaging to carry a health warning, be of a plain nature and limit advertising in places youth spend time. Pods and liquids are only allowed to contain 20 milligrams of nicotine per millilitre.

Act to Amend the Automobile Insurance Act (Newfoundland and Labrador)
Discounts for winter tires, ability of insurance firms to offer technology that can track driver habits and deductible for pain and suffering doubling to $5,000 from $2,500.

Provincial Animal Welfare Services (PAWS) Act (Ontario)
Creates new powers and offences to combat activities such as neglect and dog fighting, increases penalties and expands the list of those who can enforce laws as well as establishes a provincial advisory board to improve animal care.

Amendment to the Immigration Act (Quebec)
Immigrants required to pass a provincial test to prove they know “democratic values and Quebec values” to obtain a selection certificate, the first step toward permanent residency in the province.

Labour Standards Act (Quebec)
Placement and recruitment agencies for temporary foreign workers now need a permit to operate and must guarantee workers have required documentation. Among other demands, agencies required to pay workers not less than staff earn at the client company.

Sustainable Development Goals Act (Nova Scotia)
Commits the province to at least 10 per cent reduction in greenhouse gas emissions below 1990 levels, by 2020.

Amendments to The Safe Food for Canadians Regulations (Canada)
Growers and harvesters of fresh fruit and vegetables must meet safety requirements to prevent food safety hazards and add labels allowing produce to be quickly traced for investigation and potential recall.

The Internet Code (Canada)
A CRTC code of conduct for Internet service providers, such as Bell and Rogers, requires easier-to-understand contracts and policies, clearer information about prices,  ‘bill shock protection’ through notifications and more consumer-friendly rules for cancelling contracts.

Farm Freedom and Safety Act (Alberta)
Farms and ranches with fewer than five employees no longer required to have workplace insurance. Those requiring insurance can now choose between the province’s Workers’ Compensation Board or a private insurer.

Act to Amend the Adoption Act (Prince Edward Island)
Unseals adoption records by default, but allows both parents and children the option of filing a veto on disclosure of their identity.

Amendment to the Health of Animals Regulations (Part XII) (Canada)
Changes require animals being transported between farms, auction markets, slaughterhouses and elsewhere be suitably fed, hydrated and rested and arrive at their destination safely. Rules now include period from when an animal is prepped for transit to installation at their new location.

Act to amend mainly the Education Act with regard to school organization and governance (Quebec)
Replaces elected French-language school boards with service centres governed by boards of directors. English service centre boards will be elected, creating a two-tiered governance structure.

Regulatory changes by Ministry of Health (Nova Scotia)
In response to concerns about the growth of youth vaping, the province bans flavoured e-cigarettes and juices.

Amendment to Gasoline and Motive Fuel Tax Act (New Brunswick)
Environment Minister Jeff Carr reached a deal with the federal government to remove carbon backstop levies and replace with the province’s own fees.

Accessibility for Manitobans Act (Manitoba)
Manitoba employers with one or more employees required to provide individualized emergency response information to keep those with disabilities safe.

Amendments to the Proceeds of Crime (Money Laundering) and Terrorist Financing Act, 2019 (Canada)
Virtual currency dealers must register with the federal government and meet the same client identification, record keeping and reporting requirements as financial institutions, credit unions, casinos and other organizations.

Act to amend the Assisted Human Reproduction Act (Canada)
Sets out clear rules for compensation for surrogates and those donating ova and sperm, including, travel, accommodation, care of dependents or pets and more.  The previous law, enacted in 2004, didn’t define legitimate vs. illegal expenditures.

Amendment to Patented Medicines Regulations (Canada)
Changes countries Canada uses as a reference point to determine drug prices by including more nations with similar populations, economies and approaches to health care. The U.S. and Switzerland are dropped and Spain and Australia, among others, added.

The Education Amendment Act (Alberta)
Standardizes the age of entry for kindergarten students across the province: children must be 5 years old by Dec. 31.  The Act also allows allow school jurisdictions to provide alternative programs outside of their geographic boundary.

Making Ontario Open for Business Act (Ontario)
Adjusts Ontario’s $14 an hour minimum wage to the rate of inflation. In 2019, the Act canceled the legislated hike of the minimum wage from $14 to $15.

The Legislative Assembly (Election Dates) Amendment Act, 2018 (Saskatchewan)
Prescribes the next provincial election will take place on Oct. 26, 2020, followed by fixed-date elections held on the last Monday of October in the fourth calendar year after the last general election.

Plastic Bags Reduction Act (Nova Scotia)
Bans the use of single-use plastic bags at provincial retailers. Exemptions include bags used by dry cleaners, those used by garages to wrap tires and bags used for items such as bulk foods.