Nova Scotia shootings leave 23 dead: What we know so far

A veteran RCMP officer, a 17-year-old girl, a teacher, a nurse and two corrections officers are among the dead after a gunman wearing a Mountie uniform went on a rampage 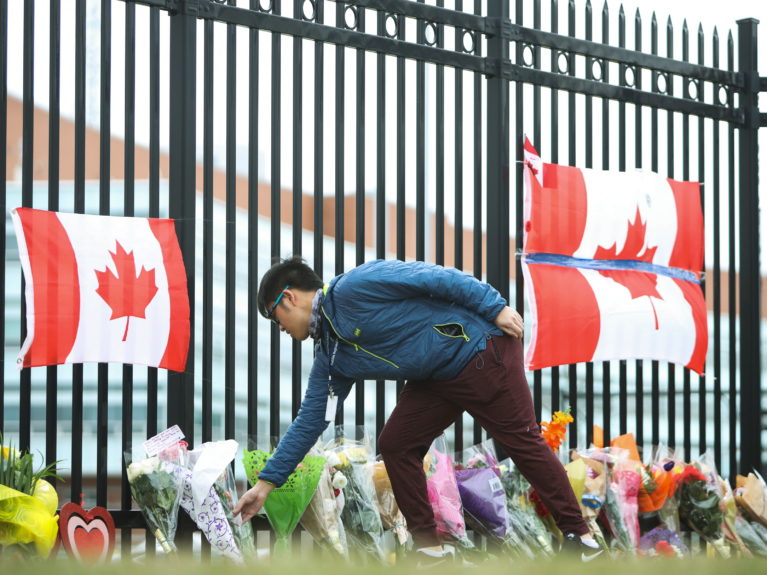 The gunman who went on a shooting rampage over the weekend in Nova Scotia killed at least 22 people, including an RCMP officer, in the worst mass murder in Canadian history.

The confirmed death toll of 23, updated on Tuesday, includes the shooter, and far surpasses the 15 killed in the 1989 attack on female students at L’École polytechnique in Montreal. RCMP in Nova Scotia said it is possible that number will rise as they continue searching crime scenes.

The killer, 51-year-old Gabriel Wortman, shot people in multiple locations, starting late on Saturday night in the Cobequid Bay town of Portapique, N.S. and working his way 90 kilometres across the centre of the province. For much of his killing spree, police said, he had disguised himself as a Mountie and was driving a car almost identical to an RCMP cruiser. As they pursued the suspect, officers came across the scenes five building fires where police would eventually find more victims.

The massive manhunt and pursuit ended at 11:40 a.m. local time the following day, when RCMP confronted Wortman at an Irving Big Stop near Enfield, about 35 kilometres north of Halifax. The Mounties have confirmed that they shot and killed him there. As a result, the province’s Serious Incident Response Team, which looks into civilian deaths involving encounters with police, is investigating that part of the incident.

51-year-old Gabriel Wortman is the suspect in our active shooter investigation in #Portapique. There are several victims. He is considered armed & dangerous. If you see him, call 911. DO NOT approach. He’s described as a white man, bald, 6’2-6’3 with green eyes. pic.twitter.com/Y2nJNULlkn

What we know about the victims

The officer killed was Constable Heidi Stevenson, a 23-year veteran of the force who was responding to the active-shooter call. There are witness accounts suggesting she deliberately rammed the killer’s fake police car in an attempt to stop him before he shot her to death and set both their cars on fire.

“Two children have lost their mother and a husband his wife,” RCMP Assistant Commissioner Lee Bergerman said in a statement posted to Facebook. “Parents lost their daughter and countless others lost an incredible friend and colleague. Heidi’s family is a part of our RCMP family and we will embrace and support them in the days, weeks and months ahead.”

Bergerman also confirmed that another officer, Constable Chad Morrison, was injured during the manhunt. He was treated and is recovering at home from minor wounds, said Chief Supt. Chris Leather, the RCMP’s criminal operations officer for Nova Scotia. 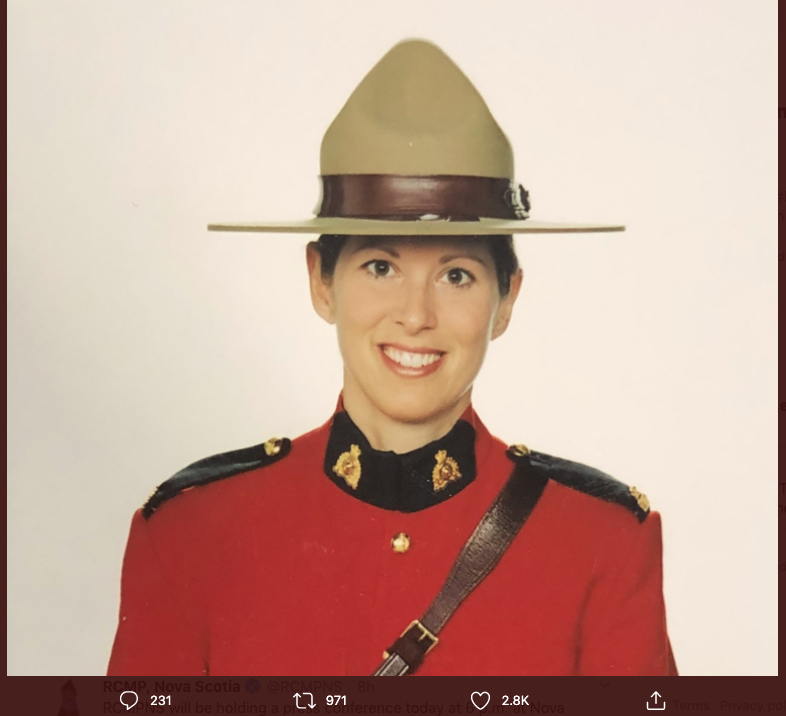 The victims included both men and women, and all were adults except for one, 17-year-old Emily Tuck of Portapique, who died with her parents Aaron Tuck and Jolene Oliver. Some of the victims were known to Wortman and targeted by him; some were not, Leather said. He declined to elaborate on the nature of the links to Wortman.

Among the dead was school teacher Lisa McCully, who worked at an elementary school in Debert, not far from Portapique. Paul Wozney, president of the Nova Scotia Teachers Union said in a release that members’ “hearts are broken along with those of her colleagues and students at Debert Elementary, as well as her family and friends who knew her not only as a passionate teacher but as a shining love in their lives.”

Greg Blair and Jamie Blair, a couple from the Truro area, were identified by a friend on Facebook as victims. “Two beautiful souls were lost today … and many more,” wrote Jessica MacBurnie. “I have absolutely no words for the heartache my family & many others are going through. This was such a careless act, & many who should have never lost their lives.”

READ MORE: Victims of the Nova Scotia shooting: ‘They were so appreciated and loved’

Family members of Heather O’Brien, a nurse from Truro, also posted identifying her as one of the victims: “At 9:59 am she sent her last text message to our family group chat,” wrote Darcy Dobson, O’Brien’s daughter. “By 10:15 she was gone. She drove down the same street in the same town she drives through every single day. She was kind. She was beautiful. She didn’t deserve any of this.”

What do we know about the gunman’s movements and motive?

RCMP Commissioner Brenda Lucki said that the shootings were not regarded as a terrorist incident, but stressed the force was only starting what promises to be a complex investigation. The shooter appeared to have begun with a discernible motivation, Lucki said, before his attacks “turned to randomness.”

“Our investigation will tell that,” the commissioner added. “We don’t know for sure, and we’re going to have to do a lot of work on finding the motivation, a lot of background, a lot of profiling-type events and a lot of crime-scene processing.”

Those inquiries have been complicated by the fact investigators are dealing with 16 different crime scenes, Chief Supt. Leather told reporters on Monday: “We will be in this for months to come, I am sure.”

On Saturday night, RCMP responded to several 911 calls at a Portapique home and arrived to find “several casualties” at the property.

As they searched for the suspect, they came across the buildings on fire, some of which burned to the ground, Leather said. Their search went on through the night, and shortly before 9 a.m. local time on Sunday, they released Wortman’s identity with a photo, describing him as the suspect in an active-shooter situation with multiple victims. 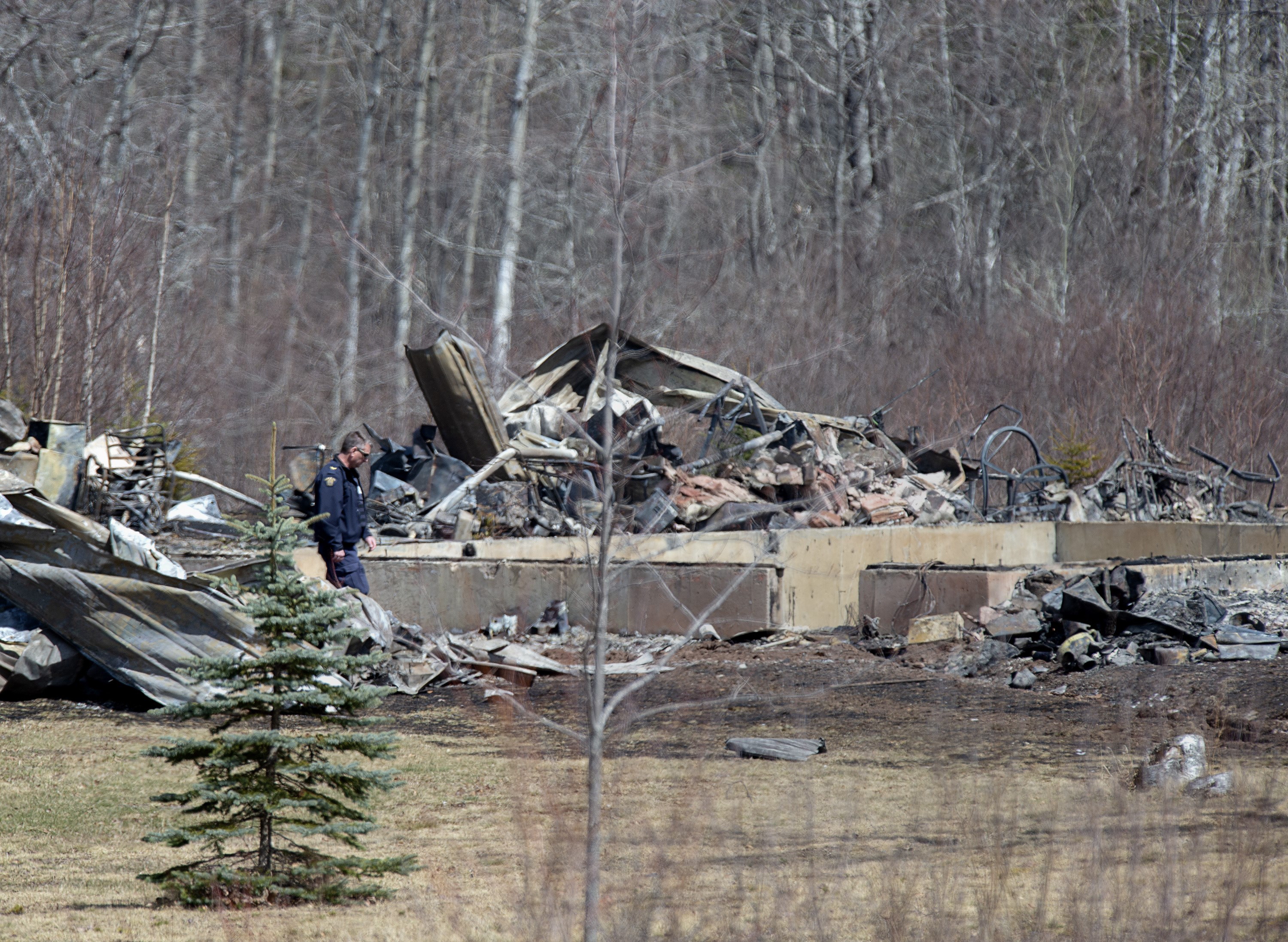 In one location along the killer’s route, near the town of Shubenacadie, what appeared to be two burnt out police cruisers could be seen at the side of the road. Leather confirmed on Monday that that was where Stevenson was killed, and that one of the burnt-out cars was the mock police car Wortman had been driving.

“It was identical in almost every way to a marked police car,” he said. The same went the uniform Wortman had been wearing: RCMP have confirmed that it was a genuine Mountie uniform, though it remains unclear how he obtained it.

On Thursday, the Globe and Mail, quoting a former acquaintance of Wortman, reported that police found a list of eight names of local people in the killer’s home on the day of his rampage. The acquaintance, Nathan Staples, told the paper that RCMP officers came to his home in Glenholme, N.S. and told him his name was on the list. He had once shared an interest with Wortman in acquiring and fixing up police cars sold at auction.

Wortman also had a history of property disputes, a report in the Toronto Star has revealed—including with his uncle, Glynn Wortman, over a home near his Portapique property that was eventually purchased by Lisa McCully, the schoolteacher he killed.

How was the public alerted?

Victims’ family members have asked why RCMP chose to warn the public through social media rather than using the province’s alert system to let residents know that an armed killer was on the loose. Nick Beaton, the husband of murdered caregiver Kristen Beaton, told CTV he didn’t see the Twitter warning before his wife, who was pregnant, departed that morning to attend to patients.

He got her on her cell phone to warn her himself, sending her the picture of Wortman police issued. But he didn’t tell her the killer was in what appeared to be an RCMP vehicle because that information wasn’t in the warning. Minutes later, he said, she was killed.

“If I had known he was on the loose, I would not have let her out of the dooryard,” Beaton said. “It wouldn’t have happened.”

The Mounties later said they did not understand until between 7 and 8 a.m. local time on Sunday that the shooter may have been driving a replica RCMP car and wearing a police uniform. They did not send out a Twitter warning containing that information until 10:17 a.m. Atlantic time

#Colchester: Gabriel Wortman may be driving what appears to be an RCMP vehicle & may be wearing an RCMP uniform. There’s 1 difference btwn his car and our RCMP vehicles: the car #. The suspect’s car is 28B11, behind rear passenger window. If you see 28B11 call 911 immediately. pic.twitter.com/yyeOeBt8Ui

Nova Scotia Premier Stephen McNeil said that provincial emergency operations officials were prepared to issue an alert—which goes to every cell phone and broadcast media outlet—but never received a request from the Mounties with the pertinent information about the gunman.

On Wednesday, the RCMP said it was in the process of getting the alert ready when officers took down the shooter in Enfield. The force has said it will review how it issued its public warnings in this case.

What do we know about Gabriel Wortman?

Information about Wortman quickly circulated online and in local media, revealing that he was a denturist who ran a clinic in Dartmouth and another in the north end of Halifax. He was featured in a 2014 CTV story, credited with helping provide dentures to a cancer survivor whose medical coverage didn’t pay for them.

People who live near Wortman’s Dartmouth clinic told reporters he had bought used squad cars and other equipment at police auctions in the past.

Several former classmates said on social media that Wortman grew up in Riverview, N.B., a suburb of Moncton, and attended the University of New Brunswick in Fredericton.

Gabriel Wortman graduated a year after I did. Because people know I graduated from Riverview High, I’m getting all kinds of calls. But I don’t know him. I knew him to see him around the school. #NovaScotia

In the 1986 yearbook of Riverview High School, Wortman’s graduation entry said—eerily—that his “future may include being an RCMP officer.”

McNeil, the premier, has voiced dismay and grief about the shootings, thanking the RCMP for putting themselves in danger to protect Nova Scotians.

“I never imagined when I went to bed last night that I would wake up to the horrific news that an active shooter was on the loose in Nova Scotia. This is one of the most senseless acts of violence in our province’s history,” he said. “To the families of the victims, and to those who are still feeling afraid, my heart goes out to you. Know that all Nova Scotians are with you.”