On heroism, fatherhood and how the Army and life are a lot like football 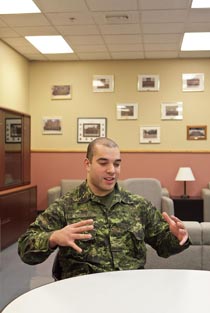 Pte. Taumy St-Hilaire is decidedly nonchalant about saving the lives of two people he will never know. In April 2011, the Montreal native and member of Quebec’s vaunted Royal 22e Régiment, the Van Doos, was engaged in a firefight in the Afghan village of Chalghowr in the Panjwai district when his battalion was attacked—and St-Hilaire did what his instincts and training told him to do. The results of one heroic deed, for which he can barely bring himself to take credit, earned him the Star of Military Valour this month. He is one of only 18 people to receive the Canadian military’s second-highest honour.

Q: Tell me about yourself. I understand that you got into the Canadian Army after playing high school football.

A: Yeah, and I didn’t like the way my life was going. At 18 I was taking football pretty seriously, full-time, and working on the side. I hadn’t finished high school yet, and I was living in Montreal alone. It was like I was going nowhere. I felt a bit lost. And yet I still wanted what I got out of football, like team spirit and competition.

Q: Had you thought of joining the Army before this?

A: I had. My oldest brother is in the Army, and I always knew that it was something I wanted to try during the course of my life. I didn’t really see myself doing any civilian work. You get to do things that most people don’t. It brings you absolutely incredible experiences.

Q: Did you know that there was a possibility you’d be going to Afghanistan?

A: Seriously, it was my goal to go to Afghanistan. When I joined I didn’t have anything else in mind, and I was lucky because I was able to get into a battalion that was getting deployed there, and I went after doing my infantry training at Valcartier.

Q: You landed in Kandahar in November 2010. What was your first impression of the country when you got off the plane?

A: The base in Kandahar is big, something like 30,000 people. But the corporals were good, they practically took us by the hand. We ate together, we went to the gym together and, when we had time, we prepared our kit together. I also knew what I was getting into, to a certain extent, because the guys who’d been to Afghanistan before us coached us really well beforehand. They were like big brothers in that way.

Q: You were in Afghanistan for five months before the mission in question. What were those months like?

A: When we got there it was all adaptation training and getting to know each other and the sergeants. December was a bit tough, but they made it easier on us. We were in Kandahar, yes, but it was Christmas all the same. My sergeant had four kids, and I could just imagine what it must have been like to leave his kids behind. I think about it now that I have a kid, and it freaks me out a little bit.

Q: Tell me about the day when it happened.

A: We were going to look for IEDs. We walked into this village, and everything seemed calm. We were eight Canadian soldiers, 10 Afghan soldiers. I’m a machine gunner, and we’re either second in front or second-last, and I was at the end of the line that day. The sentry at the front of the line saw bullets slam into a wall near the platoon. Everyone yelled, “Contact!” and took cover. We told everyone in the village, the kids and everything, to hide. Then we got back up to take position to return fire. I couldn’t see where it was coming from.

There was an Afghan soldier in front of me, and I literally jumped up onto his shoulders to climb up on the roof of a house and started returning fire from there. I was looking around, and I see this father and his kid pinned down in a ditch about 15 m in front of me. He was an older guy, with a beard. I’m not even sure if they saw me. I’m not sure what I was thinking. It might have been, “They’re in s–t.” I screamed that there were civilians, and my battalion gave me cover fire and I jumped off the roof to go get them.

Q: What happened once you got to them?

A: I took the kid by the arm and started leading him away. He followed me, I guess out of instinct. His dad was behind. He understood that it was now or never. I came back out onto the road. I left them with the K-9 unit that was behind the fight, where they were safe, and I went back to my position.

Q: So you never saw them again.

A: Nope. I have no idea who they were.

Q: How long did the whole episode take?

A: It was a minute, no longer.

Q: Was it the first time you’d been shot at?

A: I’d rather not talk about that.

Q: What happened the night you returned to base? Did you speak about the incident with the other soldiers?

A: Not really. I went back and went to bed, as usual. It was my sergeant, Pierre Garand, who saw the whole incident. It was a team effort, really. It was just a question of timing, where I was. Anybody else in the group would have done the same thing.

Q: What are your thoughts on what happened, now that some time has passed?

A: At the end of the day, I was just glad I could help someone.

Q: How does it feel to have received such a high honour?

A: First of all, I don’t see it as an individual honour at all. It’s for my platoon. This wouldn’t have happened if I’d been alone. If I could, I’d give a piece of it to everyone.

Q: Still, you’re one of very few Canadian soldiers who have received the honour.

A: Every single one of those soldiers was part of a team, a platoon. There are aspects of football in it. Life’s like that too. It’s better with teamwork. No one can really succeed alone. I mean, look at [Montreal-born UFC superstar] Georges St-Pierre. He has a team around him. People like Sgt. Garand and Cpl. Marc Ross from my battalion have both performed very heroic acts in their careers.

Q: What are you going to do now?

Q: Are you going to redeploy?

A: We’ll see what the future holds. At the moment I’m at home and taking care of my family.

Q: Your son is 12 weeks old now. How would you feel if he went into the Army eventually?

A: I just hope that he’s happy and that he does what he loves. That’s all I can ask for.