One of the last men out of Fort McMurray

Jason Markusoff tracks down Roy Powell, who stayed in his Fort McMurray home for more than 18 hours before RCMP officers found him and insisted he leave 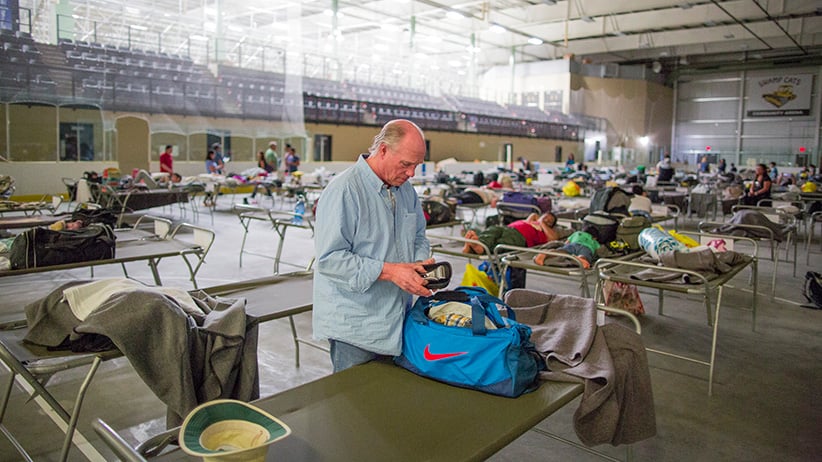 Roy Powell of Fort McMurray arrives at the Bold Centre in Lac La Biche, AB after being evacuated from fires that have taken over northern Alberta on Wednesday, May 04, 2016 . (Photograph by Chris Bolin)

The afternoon after an entire city of more than 80,000 people cleared out, Fort McMurray reeked of burnt pine, lacked any semblance of its normal urban cacophony, and other than some distant smoke clouds, the sky was pretty and blue.

It’s that last fact that Roy Powell clung to as he protested two RCMP officers’ order at his door to leave on Wednesday, nearly a full day after the rest of his trailer park, neighbourhood and city were evacuated.

He had seen fires destroying the Abasand area Tuesday night, knew there was a threat at another edge of his Timberlea neighbourhood, had been watching the TV news about his city’s epic disaster. But the 69-year-old oil sands retiree wasn’t worried. He wanted to stay put with his cat.

“Naw, because I was on the other side of the river from the fire,” Powell said about the fire that was in fact ravaging both sides of the Athabasca River’s banks. “I didn’t think it was going to go up, but probably I’m just being stubborn. Because I live by myself, I can be stubborn like that.”

Police in Fort McMurray haven’t put a number on it, but said they found a “few” stragglers Wednesday and sent them to evacuation centres by bus. The police are clearly relieved and proud there haven’t been any casualties within one of Canada’s worst-ever urban disaster zones. Anybody who’s left behind or breaks back into the blockaded city increases the risk that statistic doesn’t stick.

Related: How did Fort McMurray get out alive?

Tactical officers have been going throughout neighbourhoods. “Looking around yards, backyards, see if anyone is lurking around. Some of them are just hanging around,” RCMP Sgt. Jack Poitras told reporters Thursday at a police checkpoint south of the city.

When a pair of police came to his door, Powell wondered who squealed on him.

He’s a bit proud of having lasted in his mobile home more than 18 hours beyond the mandatory evacuation. “I went one day and night without anyone knowing I was there.

“They said I have to leave. And I said I’ve got everything I need, and the sky is blue overtop of me. There was no smoke,” Powell recalled to Maclean’s. “They said too bad: I gotta go. I have to leave everything here, including the cat.” He says one Mountie offered to carry the Siberian out, but Powell warned the woman not to: the cat used to be feral, and would likely make a casualty out of a stranger who picked her up. So the cat had to stay, but she’ll probably tear up the place, Powell figures.

RCMP took him to the city bus shop, where he hopped on “Woosh” Bus 1962. Francesco Di Bartolomeo, the driver, said he had three passengers: Powell, one young woman who was bawling as she boarded, and a twentysomething man, “completely inebriated.” Because of his belligerence, Di Bartolomeo said he never got to find out the girl’s story. But Powell was chatty about his casual snubbing of the evacuation order.

Police found more stragglers that day, as late as around 10 p.m. Wednesday, and bus drivers hauled them several hours to safety. “It was absolutely insane,” Di Bartolomeo said after arriving at the Lac La Biche evacuee centre. “If I see fire that’s pretty much taller than a bus, I’m going home. Like, I’m getting out.”

Powell casually eased into his temporary lodgings at the Lac La Biche evacuation centre, plunking his gym bag down on one of 200 cots in the facility’s darkened hockey rink. White Tilley hat on, he tried bumming for smokes outside.

Even if Powell had wanted to join the evacuation when he was supposed to, he wasn’t sure how. He keeps mostly to himself, and authorities wouldn’t renew his driver’s licence after the effects of too many concussions from his days in Hamilton high school football and Tiger-Cats camp. He doubts his mobile home would have burned down—as of Thursday afternoon, that part of Timberlea was fine—but hours after leaving said he was fine either way. “It really doesn’t matter if I stay or not stay. I mean, if it burns down, what the hell. It’s insured.”

Related: The insurance realities of the Fort McMurray fire

With no cellular phone, he hasn’t reached his two adult sons who live in Edmonton. He’s not fussed about that either. He seldom speaks with them, he said, and he declined a reporter’s offer to call on his phone.

“They’ll probably call when I get home,” he said, returning to his larger interest: finding a cigarette.