One of the Queen's favourite brooches has Canadian roots

When John Williamson found 'the finest pink diamond ever discovered,' he sent as a wedding gift to Elizabeth 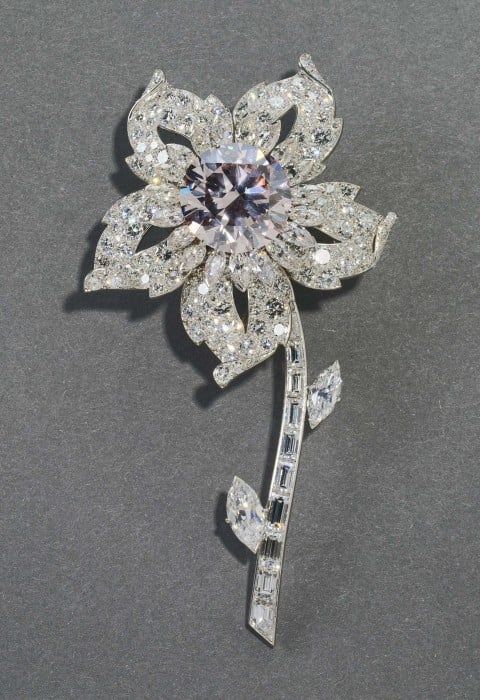 Photograph courtesy of The Royal Collection

John Williamson was in a quandary in October 1947. Two fabulous diamonds had been found at his east African mine—a rare, virtually flawless 54.5-carat pink diamond and a huge 175-carat blue-white diamond. One was destined to be a wedding gift for Princess Elizabeth. “Which one do you think?” he asked his partner Iqbal Chopra and his wife, according to an account by Iqbal’s grandson Jarat in the journal Old Africa. “We thought he should send the pink one. He said, ‘That is what I thought. Even though it doesn’t look as important as the big blue-white.’ ” He immediately sent it to London.

The raw pink stone was cut down to 23.6 carats and used by Cartier as the centre of a jonquil-shaped flower brooch that also featured 200 small white diamonds. Considered “the finest pink diamond ever discovered,” by the Royal Collection, the Williamson pink is frequently pinned to the Queen’s coat. And this summer it will be a featured attraction at an exhibit of royal diamonds at Buckingham Palace.

Yet despite his extraordinary accomplishments, the Canadian man behind the jewellery is largely forgotten. He only made it into the Canadian Mining Hall of Fame in 2011. And few detailed first-hand accounts survive of the independent, sometimes prickly, entrepreneur. Tall and handsome with a Clark Gable look, John Thoburn Williamson was also “taciturn to the point of secretiveness and difficult to get to know,” John Gawaine wrote The Diamond Seeker, a fictionalized account of Williamson’s life that is widely cited by experts on the diamond industry.

Williamson was born in Montfort, Que., in 1907. While studying law at McGill University he spent the summer of 1926 in Labrador working on a geological survey. He was hooked. The young man switched degrees immediately, got his Ph.D. by 1933 and set off for Africa where he quickly focused on diamonds. He lived there the rest of his life.

After working for a few years for Anglo-American, which controlled De Beers, he got a job at a small mining company in Tanganyika, now Tanzania. Convinced there was a big diamond pipe waiting to be discovered, he took over the mine’s operations and continued prospecting when the firm pulled out in 1939. Soon he was short of cash. Chopra, a local lawyer, agreed to fund him.

On March 6, 1940, his explorations paid off when he discovered a large diamondiferous pipe at Mwadui. Refusing outside financial assistance or help, he was the only man in the 20th century to create his own diamond mine.

Initially, Williamson lived in a mud hut on the grounds of his mine, using diamond sales to finance its expansion. He built a community where none existed, complete with hospital, schools, libraries, recreation clubs and sports facilities. His African workers lived onsite with their families, something unheard of in the industry.

By the time he died of cancer in 1958, his mine was selling more than 500,000 carats annually, a haul worth more than $100 million today, making him one of the world’s richest men. Mwadui was sold by his siblings and Chopra to De Beers and the colonial government. As part of the deal, African workers were to take over the skilled positions. Mousseau Tremblay, a Canadian geologist and engineer who worked with Williamson, recounts how a large contingent of Tanzanians went “to Canada for training in the various disciplines required to run a mine.” Many of the Canadian scientists who worked for Williamson came home to train a new generation of diamond industry professionals.

As for his most famous diamond, his reason for giving it to Princess Elizabeth was long unclear. In Suzy Menkes’s authoritative book on royal jewellery, she states the Canadian “found his only happiness in his homage to the British monarchy.” Yet none of the accounts of his time in Africa mention any such regal obsession. It was an era, though, when Africa was bestowing countless precious gifts, largely diamonds, on the future sovereign. Among them were 21 stones from South Africa so perfect that Elizabeth calls them “my best diamonds.” Southern Rhodesia, now Zimbabwe, gave her a diamond and platinum pin in the shape of a flame lily.

Another part of the story was revealed in 1996, when Jimmy Sudra, a son of one of the mine workers, recounted how he was playing with his chums on the grounds of Mwadui when one of them noticed a “piece of glass” in the dirt under a baobab tree. It was the pink diamond. “God must have placed it there, or why would it be found? So it was fit for only a monarch to wear,” he recalled. Williamson had his most trusted workers and their children hold and bless the rock before shipping it to London, Sudra told the Daily Mail. Years later, when Sudra was to receive an honour from Buckingham Palace for charity work, he wrote to the Queen’s private secretary asking if she would wear the brooch to the investiture. She did. After giving Sudra his medal, she leaned forward, put her hand on that glittering rose-coloured diamond and asked, “Is this the diamond you handled?”