One question in the wake of Moncton massacre: Why?

A team of Maclean's writers turned to friends, family and social media to chart the downward spiral of the man accused of killing three Mounties 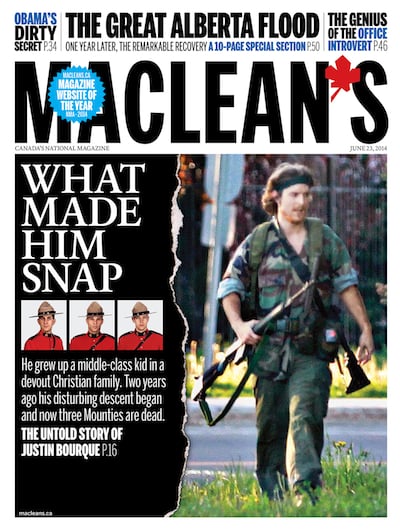 By the time police cornered Justin Bourque, 30 terrifying hours after he allegedly executed three RCMP officers, millions of people around the world had already seen the photograph: a young, camouflaged man—pump-action shotgun strapped to his back, semi-automatic rifle in hand—walking through a Moncton, N.B., neighbourhood. On social media, those who knew the gunman voiced their absolute shock.

“its justin,” typed another.

Bourque, 24, was safely behind bars on Tuesday afternoon as the country paid its final respects to the three Mounties he allegedly gunned down: Fabrice Georges Gévaudan, 45; Douglas James Larche, 40; and David Ross, 32. For devastated loved ones, no explanation will ever be enough. Although investigators have already begun the exhaustive task of retracing Bourque’s final steps, the answers, whatever they are, won’t turn back time. Three brave men are dead, and they shouldn’t be.

But the question inevitably lingers, as it always does after senseless tragedies like this: Why? Why would a witty, intelligent man with loving parents, supportive siblings—and a hilarious knack for pop-culture impressions—load his firearms and literally dare the police to respond? What could have possibly triggered such unthinkable violence?

Only Justin Bourque knows for sure (and even he may not). But this week’s Maclean’s cover story reveals that his downward spiral began more than two years ago, as he grew increasingly fixated on faraway wars, state conspiracies and the right to bear arms. He talked to buddies about the looming apocalypse and his desire to “live off the grid.” Some friends feared that Bourque, a regular pot smoker, had turned to much harder substances—fuelling his paranoia.

“Ask yourself, would you fight for the future of your children or grandchildren, or your family and friends’ sons and daughters?” he wrote on his Facebook page on April 7, two months before the rampage. “The answer is: no you’re too stupid to know what to fight for, cause we’re already losing the silent war you don’t wanna believe is happening.”

Even Bourque’s parents, concerned about their son’s increasingly disturbing behaviour, reached out to retired friends who worked in law enforcement. Nothing could be done, they were told. “I don’t know what caused this,” Victor Bourque, Justin’s father, tells Maclean’s. “A gentle soul like him who wouldn’t hurt a fly all of a sudden flips over, so there’s something there that’s unanswered, and we’ll only find out as time goes along. Everybody will have to be patient.”

Read the full story in this week’s edition of Maclean’s magazine. It’s on newsstands starting Thursday, or find the digital edition on your tablet today.