Ottawa has little help in store for stranded Canadian travellers 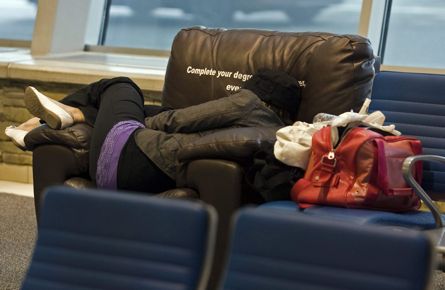 A news release from Foreign Affairs and International Trade Canada (DFAIT), to which Maclean’s was granted advanced access, suggests Canadians stranded in Europe by the volcanic ash cloud shouldn’t hold their breath waiting for government help. While DFAIT vows it is “working flat-out to assist Canadians in this situation,” so far, the department’s response has been modest.

DFAIT recommends, “that travelers work with their airline or travel agent to discuss alternative travel arrangements.” In addition, it advises Canadians to consult the department’s website to learn more about available consular services. (As of 5 p.m on Tuesday evening, the site warned Canadians to expect furthers delays, and asked they continue to checking back for “regular updates.”)

So far, about 500 Canadians have made contact with embassies and high commissions in Europe to ask for help, and over 240 calls have been fielded by DFAIT’s operations centre in Ottawa. “It’s really not a lot,” a DFAIT official told Maclean’s on Tuesday. “It seems a lot of people are managing this on their own.”

They may have little choice in the matter. DFAIT’s response thus far has been limited. It has “extended consular hours” at its European embassies. It is also “providing local information, facilitating with transfer of funds, assisting with communications, [and] helping to ensure that Canadians have access to medical care or assistance when required.” But there is no sign that an evacuation plan is being considered.

“Does the government have any contingency plan whatsoever to assist these Canadians in difficult times, or are they just supposed to, as it were, fend for themselves?” Liberal MP Dan McTeague wondered during Tuesday’s Question Period. The government response’s, delivered by Foreign Affairs Minister Lawrence Cannon, was that “Canadian officials are closely monitoring the ash cloud.”

Some speculated that the Canadian government might be moved to act after it was announced that Britain was using Navy ships to evacuate its stranded soldiers and civilians. European travel has been at a standstill since Iceland’s Eyjafjallajökull volcano erupted last Wednesday, spewing clouds of ash and chunks of ice the size of houses—and leaving an estimated 750,000 stranded across Europe.

However Cannon offered little more than condolences on Tuesday. “Clearly we sympathize with all the travelers who have been inconvenienced by this volcanic eruption,” he said. “As you know, it is a natural phenomenon that nobody could have been predicted.”