From the Maclean's issue on Ottawa's powerful, five people who are no longer

Power is fleeting. As Paul Wells reports, for some, it's already fled

Watch later this morning for the Maclean’s Power List. In the meantime, here are five who did not make the list: 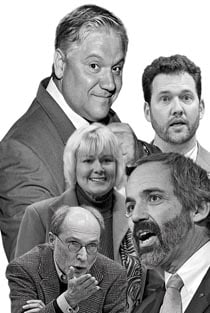 1. Cheryl Gallant: Conservative MP for Renfrew-Nipissing-Pembroke. Once tweeted, “No carbon tax please, Igafi!” A reference to the leaders of the Liberal party and Libya. Deleted the tweet later. Doesn’t talk much in public these days.

3. Jim Karygiannis: Liberal MP for Scarborough-Agincourt. Believes he holds the key to a Liberal resurgence in ethnic communities. Can’t get anyone to ask for the key.

5. Norman Spector: Former Mulroney chief of staff. Lives in Victoria. Tweets about what’s going on in Ottawa. Gets most of it wrong.