Trudeau, Wynne, and Tory gather at the Toronto Zoo for a very important panda-naming ceremony

“Can the people in the front lower their cameras so the cameras at the back can see?” Prime Minister Justin Trudeau helped marshal a photo op himself Monday morning, as a bamboozling number of media and guests packed into the Toronto Zoo. The ceremony was held to announce the names of the zoo’s twin panda cubs. A row of trumpets stood in front of panda placards; a children’s choir wore panda shirts; some guests wore fake panda ears; a catering service dished out panda cookies, and one journalist in the scrum, awed by the spectacle, joked that the names of the cubs could be “over” and “kill.”

Next to the ceremonial tent, inside a panda house labelled “strict quarantine,” the cubs were clueless to the crowd fussing over them. The male, now named Jia Panpan, or “Canadian Hope,” often snoozes with a paw over his eyes as if playing peek-a-boo, letting his sister, Jia Yueyue, or “Canadian Joy,” step on his face and nibble at him. Along with drinking their mother’s milk one at a time, the cubs live off a mixture of human baby formula and puppy formula, and the cubs combine the cutest of both species—with sooky-eyed faces and fleecy coats that people adore—and forgive for the $200,000 price tag.

Indeed, based on the attraction and cost, these cubs are very important pandas. Ontario Premier Kathleen Wynne missed question period for the event; Toronto Mayor John Tory promised in his speech to soon visit the hometown of the parent pandas, and Trudeau included his panda house visit just before his White House visit on Thursday. The zoo had been planning the event since November, just after the cubs became the first pandas born in Canada. Four months later, the naming ceremony called for national anthems, flags, videos, catering, and a camel out front to greet guests.

“When the birth of Er Shun’s twin cubs was announced,” said Wynne in her speech, “all of Ontario was captured by these furry little bundles.” When the cubs go on public exhibit on March 12—just in time for Ontario’s March break—the “panda-mania” could resemble the frenzy of 2013 when the two adult pandas arrived, with Stephen and Laureen Harper greeting them on a red carpet on the tarmac.

Before their speeches, Trudeau, Wynne and Tory dressed in zoo gowns, sanitized their hands and cradled the cubs in their arms in a red lawn chair in the panda house (Trudeau didn’t try his balancing babies trick). “I can assure you,” Trudeau said at the podium, “my children are very jealous that I just got to hold those baby pandas.” Later, the dignitaries held a photo shoot with the cubs in a pen in the background, with handlers watching the cubs at a ratio of three to one.

The cubs are also a furry foreign-affairs strategy; at the naming event, the Chinese ambassador to Canada delivered the longest speech, children waved Chinese flags, and Trudeau described the pandas as a symbol of an improving relationship otherwise borne out by rising numbers of Chinese students at Canadian universities and a growing number of Chinese immigrants. Although the Toronto Zoo will pay China $600,000 for the birth of each cub, the money goes to the Chengdu Research Base of Giant Panda Breeding to further conservation efforts; China has deployed pandas as goodwill gestures to Canada, rather than as money-makers, ever since it sent Canada a pair of adults, Qinn Qinn and Sha Ya, on three-month loan in 1985. Canada has yet to reciprocate with beavers.

When the cubs returned to the panda house after the event, Jia Panpan fell asleep, while his sister attempted to summit a wooden platform, with a boost on the bum from the keepers when she slipped through the cracks. “She’s a goer,” said Maria Franke, the Toronto Zoo’s curator of mammals, while Jia Yueyue roamed the room, with the ears of Mickey Mouse and the voice of a squeaky toy. As the Prime Minister left with his RCMP officer and tour technicians, the cubs could get back to a day of eating, sleeping and playing, with no further interruptions. 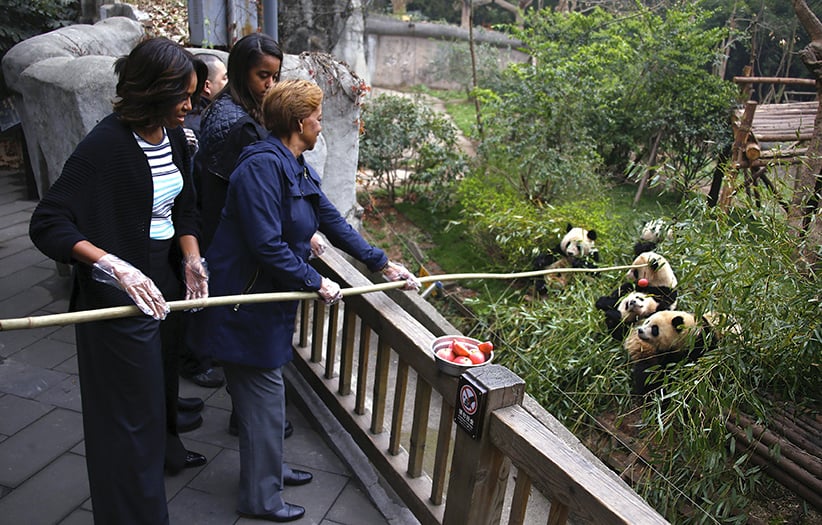 US First lady Michelle Obama (L) and her mother Marian Robinson (R) use a pole to feed apples to giant pandas during their visit to Giant Panda Research Base in Chengdu, Sichuan province on March 26, 2014. (Petar Kujundzic/AFP/Getty Images)

Here’s a stance that’s hardly politically controversial: Pandas are incredibly cute. So it’s little wonder that China has a long tradition of deploying the adorable fuzzy bears as a form of diplomacy, creating buzzy photo shoots with the usually perplexed animals. From the Obama family to Taiwanese leaders, here’s a peek at some leaders who played politics by getting in a little panda loving.