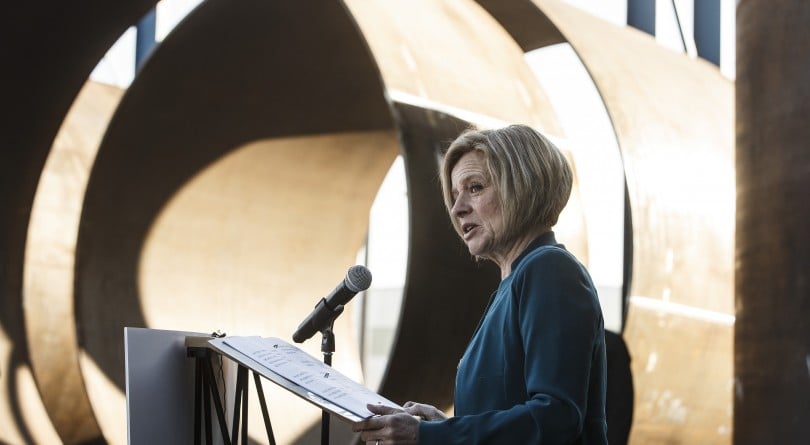 Rachel Notley at a campaign stop in Edmonton. Many of the Alberta parties' ideas come direct from well-known think tanks (Jason Franson/CP)

Every day during Alberta’s election campaign, Maclean’s correspondent Jason Markusoff will analyze trends, promises, bozo eruptions and any other notable news from the hustings. Sign up for the Maclean’s politics insider to get Markusoff’s inside track in your inbox every morning.

Jason Kenney leaned on the wisdom of former Saskatchewan NDP treasurer Janice MacKinnon when announcing Thursday apromise to privately contract out publicly insured surgeries. That seems an unconventional information source for Kenney, until you realize McKinnon wrote her report for the Fraser Institute. The western Canadian conservative think-tank has long been feedstock for Kenney’s policy brain. Its research underpins his proposals to slash regulation and corporate taxes, and he further justified his medical wait-times strategy Thursday with a Fraser Institute report conveniently released that morning. Mark Milke, a lead author of the United Conservative Party’s platform, is a Fraser alum—paragraphs of a UCP policy backgrounder were copied verbatim from his recent book on Ralph Klein and Rachel Notley.

Big deal, Markusoff, I can hear you mumble. Conservatives like conservative think-tankery. My point, dear mumbling reader, is that Alberta’s 2019 election is such a showcase of stark ideological opposites, dominated by two parties with polar-opposite orthodoxies offering a many off-the-shelf ideas from the nation’s policy hothouses. Though many Albertans are fond of calling Rachel Notley’s NDP “socialist,” the party’s lodestar is not the Karl Marx bibliography—it’s left-leaning think tanks like the Broadbent Institute and Canadian Centre for Policy Alternatives, both of which provided basis for the NDP’s daycare policy. Her policy of investing in petrochemical and oil refining projects is an old 1970s-era Alberta Tory invention, but it’s also out of contemporary organized labour playbooks, and a former Alberta Federation of Labour official authored the party’s 2015 platform, much of which is being rehashed four years later. Notley hews to progressive orthodoxy that frowns on corporate taxes, but makes a point recently of citing a not-so-lefty Bloomberg article stating the Trump administration’s corporate tax cuts padded corporate profits but not the economy. (The article explains the cuts had little stimulative impact because the U.S. economy is already red-hot; not so much the case in Alberta.)

By way of proving how strong a current confirmation bias can be in Alberta politics, Kenney’s corporate tax plan relies on research by University of Alberta economist Bev Dahlby, who predicts solid economic growth if the business tax rate drops. Kenney is less likely to quote Dahlby’s recent work for the Ecofiscal Commission on carbon taxes: “Carbon pricing is the fairest and cheapest way to fight climate change,” states a new report Dahlby co-authored. Meanwhile, fellow U of A economist Andrew Leach, who led the climate panel which gave the Alberta NDP its carbon tax policy, has praised the Kenney’s corporate tax proposal that Notley derides.

Aside from Notley’s pipeline policy, we’re getting fairly paint-by-numbers ideological platforms from the two parties. Elections are always about choices, but they’re seldom as stark as this one.

The kamikaze candidate’s aide speaks out

Throughout the campaign that may make Jason Kenney premier, more light is being shed on how he became UCP leader in the first place. The RCMP now looking into allegations his campaign perpetrated voter fraud, while Kenney’s integrity has taken a pounding due to revelations of how his campaign coordinated with [scare-quotes] “rival candidate” Jeff Callaway, whose candidacy largely existed to disparage Brian Jean, Kenney’s main competition. Writing for Maclean’s, Jen Gerson unpacks the role of Callaway campaign executive assistant Jeff Park, who wasn’t aware until recently of the extent of collusion between the Callaway and Kenney camps.

Park said that he was led to believe that the Callaway campaign might also provide an opening for him to work for Kenney directly.

“It was explained to me that…you know, Jason hasn’t been in Calgary or Alberta all that much and he doesn’t know the Alberta political operatives as well as he should and this would be an an avenue to—if Mr. Kenney was to win the leadership and we were to drop out early, which was always presented as being on the table—to make sure there were more Alberta-based people involved in Mr. Kenney’s leadership campaign and leadership office if he were to win.” (Maclean’s)

Kenney, meanwhile, once again carefully answered reporters’ questions about the RCMP’s contacts with his campaign into estranged organizers’ allegations of voter identification fraud. But he suggested the police force’s sniffing around doesn’t amount to a full-on criminal probe into his team. “We have not been told we are under investigation,” Kenney told reporters.

Party insiders express confidence that voters won’t care much about the Callaway mess and this fraud innuendo—not when economic anxiety remains the top issue on voters’ minds.

From the wilds, a lonely cry for an Alberta sales tax

Ted Morton, a former Tory finance minister, calls PST a “political suicide tax” in Alberta. It’s perfectly normal everywhere else, but oil-rich Alberta has felt immune to the typical laws of fiscal gravity, and that’s held with all mainstream parties for the province’s recent history, even with the decimation of oil royalty revenues.

Which might be our way of saying the Alberta Liberals are not a mainstream party. The party was Official Opposition from 1993 to 2012, but its legislature delegation has rapidly shrunk, and the party is likely to lose its only Alberta seat this year. But party leader David Khan earns bravery points for promising Alberta adopt an eight-per-cent provincial sales tax—and in turn slash income taxes, including an exemption for all income earned until $57,250. It’s an idea lifted from a 2013 University of Calgary public policy school paper. And it’s one worth earnestly debating for fiscally wobbly Alberta, despite how third-rail it is. Which is, sadly, precisely why it will get scarce discussion this campaign. (Canadian Press)

Kenney is a undoubtedly a powerful politician with renown and influence across Canada. Even before becoming premier, he claims his oomph helped kill a potential lawsuit against oil companies in Toronto. Centre-of-the-Universe councillors voted against forwarding for council consideration a proposal by colleague Mike Layton to study suing oil companies for the costs of climate change. Upon hearing this, Kenney touted his own campaign-trail warnings against this move, at a sensitive time for Alberta—Notley joined his fist-shaking at Layton—and the former Ottawa-based federal minister suggested calls to councillors he knows on council slayed this supposed menace to Alberta’s oil patch. “Quite frankly, I don’t know where else they would have gotten that message from if I hadn’t sent that letter to council and made those calls,” he told reporters.

David Rider, the Toronto Star’s City Hall bureau chief, noted that such rejections of councillor motions can be a “very common fate,” not the crowning accomplishment Kenney proclaimed. Moreover, the idea isn’t dead—council merely voted to forward to council’s environment committee for future talks. Layton’s bid will live on another day, should Kenney wish to remain vigilant.

But Albertans have one big council vote in their favour. Toronto Mayor John Tory did tell the Calgary Sun he’s opposed to suing oil companies:

“You can’t very well call out one industry that provides the fuel and then drive your car around and think that somehow there is no connection between the people who provide the fuel for the car and the people who drive the cars or make them.”

“The city of Toronto and its people and its businesses have benefited immensely from being partners with Alberta in our country,” says the mayor. (Calgary Sun)

What else we’re reading:

Keith Gerein on Kenney’s supervised drug consumption site plan: It’s encouraging he no longer calls them places “helping addicts inject poison into their bodies,” but his promised socioeconomic reviews of existing facilities, with more concern for neighbour complaints about crime and disorder than the thousands of overdoses reversed, shows a not-so-open mind. “In terms of the ‘compassion’ Kenney is seeking, I suspect those who had their lives saved would say they were well served on that score.” (Edmonton Journal)

Andray Domise on candidates’ racism and how it’s covered: “The people behind the bylines and headlines in Alberta’s media class are, as with the rest of the country, very white. They carry with them the sensibilities that often insulate white supremacy, even if inadvertently (as with the Calgary Herald headline that uncritically repeated Kiryakos’s claim that she was the victim of a ‘smear’ campaign)… This is an endless source of frustration for the communities of colour in the province, and across Canada, as we are perpetually dragged back to the same naïve and uncomplicated conversations about racism, even as our communities increasingly come under attack.(Maclean’s)

Licia Corbella on NDP’s power system mismanagment: “Clark says if he had his way, he would hold a royal commission into the Alberta ‘NDP government’s single biggest scandal’ — its meddling with Alberta’s electricity system that led to the en-masse resignation of all but one member from the electricity balancing pool and has cost Alberta taxpayers $2 billion while getting nothing in return.” (Calgary Herald)

Gary Mason on the UCP plan to roll back protections for school gay-straight alliances: “Mr. Kenney needs to ask himself whether he’s prepared to risk Alberta’s reputation over a move that is small, petty and mean-spirited, all to serve the interests of a close-minded, intolerant minority. Ahead of a provincial election, Albertans need to ponder that question as well.” (Globe and Mail)  Meanwhile, several hundred Calgarians rallied on the issue on Thursday night. It’s normally near-impossible to get such large crowds out in button-down Calgary for a political protest that’s unrelated to pipelines.