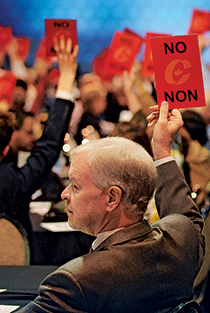 Reviews for Stephen Harper’s Nov. 1 speech to the Conservative party convention in Calgary haven’t been great. So let’s play it according to the advice Harper was getting beforehand. Imagine he had decided to come clean about the Senate spending scandal. How would that have gone?

If he had been in a confessional mood, the Prime Minister would have moved quickly past the relatively easy questions. Why, for instance, did he think Mike Duffy would make a good senator for Prince Edward Island? After warming up on that stumper, he would have moved on to the hard stuff.

At some point, then, he would have had to try to explain to 2,000 Conservative delegates how it came to pass that on Friday, May 17, the Prime Minister’s then-communications director, Andrew MacDougall, came to convene reporters to an on-the-record briefing at the National Press Theatre.

May 17 was an interesting date. Two days earlier, CTV News had revealed that Nigel Wright, Harper’s then-chief of staff, had written a $90,000 personal cheque to cover Duffy’s disputed housing expenses. And it would be another two days before Wright would announce his resignation. (And nearly six more months before Harper would begin telling talk radio hosts that Wright had not resigned but had been fired. But now we’re getting ahead of ourselves.)

On May 17, then, Nigel Wright was still on the government payroll as the Prime Minister’s hand-picked, cheque-writing, naughty-senator-bailing-out chief of staff. And Andrew MacDougall summoned reporters so he could explain to them that this was an excellent state of affairs.

Mac Harb, a Liberal-appointed senator, and Patrick Brazeau, appointed as a Conservative on the same day in 2008 when Duffy was called to his red-chamber reward, were both resisting paying back their disputed expenses, MacDougall told reporters. “If you’re looking at the scorecard, there’s one for three senators that returned money to the taxpayers of Canada that was improperly claimed,” MacDougall said, adding that “the overarching imperative was to get that money returned, as it now has been returned.”

On his way to Calgary last week, Harper was telling anyone who would listen that he was shocked at Wright’s decision, taken alone and shared with—well, he used to say Wright shared his decision with nobody, but that story won’t stand up any more, so these days he says Wright shared it with “a very few” PMO staffers, and at any rate certainly not with Harper himself.

These days Harper insists he found Wright’s action unacceptable on its face and promptly showed him the door. But the record shows that Harper spent four days sticking up for Wright; that he sent his chief spokesman to hold a news conference holding Wright up as a relative beacon of ethical crisis management; and that Harper had his staff urge other senators to live up to the Mike Duffy standard of contrition.

Some commentators hoped Harper would use his speech to the Conservatives to explain why any of this makes sense. Perhaps we should not be surprised that Harper decided not to rise to that challenge.

The Prime Minister’s twists and turns on the Senate affair would break a snake’s back. There is no explaining them. In the insane hypothesis that Harper had tried to explain them in Calgary, the first question we would have asked afterward is why he waited from May until November to do it. So essaying an explanation now would not really have helped. It’s just a mess, a sinkhole of judgment whose radius is very much larger than the distance between Harper’s office and the one Wright used to occupy. As another former Harper spokesman once said, more than a decade ago and in very different circumstances, “This turd won’t polish.”

So why bother? For a man whose goal is to endure as prime minister long enough to change the country, this question would have occurred to Harper very early. One can imagine him thinking something like this:

“I could try to explain away the behaviour of my appointees and the zigzags in my own response to it. I could spend the next few months talking about the terrible judgment of my plutocrat fixer-in-chief and my TV-star Senate appointee. I could air, in public, questions that will probably be tried in courts of law later, and make spotting the contradictions a national parlour game.

“Or I could talk about some other stuff.”

And so it came to pass that Stephen Harper devoted his 39-minute speech to the delegates to all the things he thinks he’s done right, instead of to the events of May 2013, the second-worst month of his political life. (Until his career ends, nothing will ever top November-December 2008, when he nearly let Stéphane Dion and Jack Layton take his job from him.) Instead of fresh explanations, Harper offered well-worn tales of derring-do: the Universal Child Care Benefit, the GST cuts, the end of the Wheat Board monopoly and of the long-gun registry. Each time Harper played one of the old hits, reporters covering the event rolled their eyes, but many of the delegates in Hall D of Calgary’s BMO Centre felt a little bit better.

Harper reminded the faithful that no Liberal government had done these things, and no NDP government would. This has the advantage of being true. Outside the hall were millions of Canadians who, in many cases, support other parties precisely because of Harper’s position on taxes, daycare, gun control and a hundred other issues. Inside the hall were hundreds who like Harper’s stance on these files, and may have needed reminding.

The whole weekend was a kind of pageant, a defiant announcement that Harper will double down, and double down again, before he will ever apologize. The party’s chief bagman, Sen. Irving Gerstein, told delegates he was a bagman. Delegates told me they worried the party is too autocratic, and when I asked a senior party official what he made of Saturday’s policy debates, he said, “I haven’t really been paying attention.”

Reporters were cooped up in a filing room without potable water or free WiFi. Three of the convention’s four halls were closed to reporters for the duration, and when we ventured past an imaginary line on the floor of the fourth, volunteers in blue pushed us back. After his speech, Harper and his band played classic-rock hits at a casino next to the convention centre; reporters were barred.

In its details, this cheerful contempt was an extension and refinement of the treatment Harper used to reserve for the press corps. As late as 2011, I could walk around on the floor of a Conservative party convention at leisure and unharassed. The Conservative party had meetings to decide how much further to tighten the cordon sanitaire, appointed staffers to enforce it who might have been given other tasks. A few Harper supporters will be delighted to hear we were denied our “perks,” as if water and freedom of association are luxuries. Here again, Harper was just being Harper. It’s worked for him for nearly a decade. He won’t stop now.

When it was over, Conservatives went back to Ottawa, where the Senate voted to suspend Duffy, Brazeau and Pam Wallin. When the next election comes, Harper will be able to say he repealed the long-gun registry, negotiated free trade with Europe, and docked the naughty senators’ pay as soon as he could. And even if the last of those three announcements is a gentle fib, it’ll still win applause. Now as always, Stephen Harper will do this his way.