Prescribed fires save money and lives. Why don't we do more?

Public safety campaigns, like Smokey Bear, spread the idea that all fires are dangerous. That type of thinking is making the problem of wildfires worse. 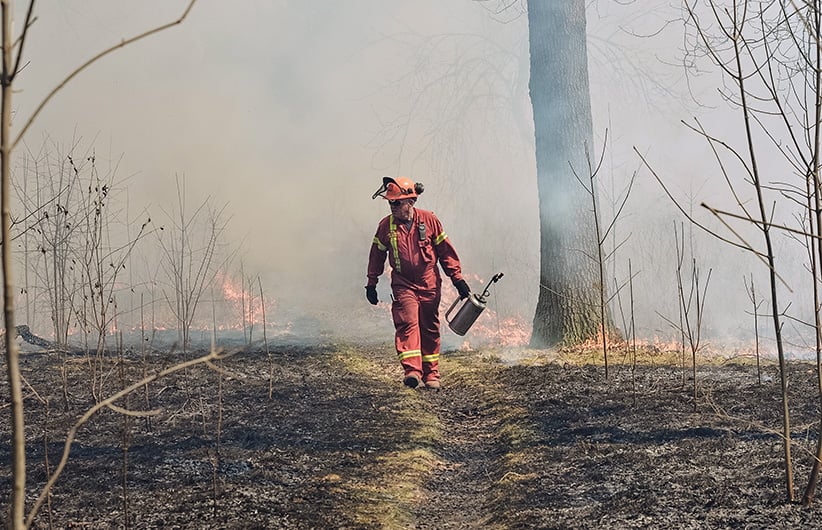 As the flames of Fort McMurray come under control, questions will start to rise about how they could have been prevented. The answer, say those who study wildfires, may lie in the practice of prescribed burns, by which foresters and firefighters assess a site, establish boundaries and ignite the bush—burning under controlled conditions, it’s been shown, can head off more catastrophic fires later on.

Yet despite ample evidence that the practice works, Canadians, especially those involved in tourism, wildlife protection and the logging industry, are still resistant to setting forests aflame.

“A lot of lip service is paid to it but very few agencies do it,” says Mark Heathcott, who coordinated controlled burns for Parks Canada for 23 years, before retiring in 2007. “People don’t understand the benefit of fire.” Natural Resources Canada doesn’t keep data on the number and location of prescribed burns, but Parks Canada has planned just 12 prescribed burns for 2016, all in southern Alberta and totalling 13,982 hectares. Alberta Agriculture and Forestry is partway through a plan to burn 4,589 hectares, also concentrated in the populated south. By comparison, the U.S. prescribes burns for about 3.25 million hectares each year. “We’re way behind the Americans,” says Heathcott. (Out of respect to the firefighters battling the Fort McMurray blaze, Heathcott declined to comment on whether or not prescribed burning could have prevented it.)

Controlled fires are based on the principle that inevitably, forests must burn; most Canadian forests have natural fire cycles of 10 to 100 years. While they can ignite at random by lightning, trees burn more safely in a controlled environment. At Banff National Park, Heathcott was often appointed the role of “the burning boss.” His team of four or five staff would spend months at a time assessing a site and “writing prescription” for a single controlled fire. They would identify streams, ridges, mountains or previously burned areas to act as natural boundaries, or create their own with bulldozers. After consulting the town and waiting for prime moisture and wind conditions, they would hike into the woods wearing fire-retardant coveralls. They would light a match or fuse or coordinate with a pilot to drop ignition capsules from the air, setting fire to the trees at the perimeter of the prescribed area and letting it burn inward. “These things aren’t slapdash plans,” says Heathcott. “Nobody ever wants to relinquish control of fire and have it burning willy-nilly on the landscape.”

Prescribing burns can save money and lives. Although the burns sometimes make “excursions” beyond the prescribed site, the planners mark out buffer zones and create worst-case contingency plans in case the flames venture further. Once the fire stops spreading, foresters monitor the trees as they smolder, sometimes for months. After the embers finally run cold, the burnt area can prevent nearby wildfires from spreading by starving them of fuel. Prescribed burning costs up to $1,000 per hectare to perform, according to Heathcott, which is penny cash compared to the potential cost from a massive wildfire—damage from the Fort McMurray fire, for instance, is expected to cost $9 billion.

However, Canada makes little use of the practice. Banff became the first national park in the country to perform a controlled burn in 1983, and since then, parks and provincial forestry departments in Alberta, British Columbia and Ontario, including in Toronto’s High Park, have only conducted them sparingly. First Nations communities executed burns for centuries, sometimes in Northern Alberta near present-day Fort McMurray, but modern mentalities have posited fire as an element to be extinguished. Dave Gill, forestry manager for the West Bank First Nations in the Okanagan Valley, B.C., says his community would and should be prescribing a fire every 10 to 15 years, but they no longer perform any because of liability rules. “As soon as we get a little fire, we knock it out,” he says. “You end up with a catastrophic wildfire.”

Public safety campaigns spread the idea that fire is nothing but dangerous. “In the earlier days, we had Smokey the Bear,” says Peter Murphy, a retired professor of forestry management at the University of Alberta. “He was telling us to prevent fires, and we did.” Alberta’s fire safety mascot, Bernie the Beaver, has sent the same message. “They conditioned people’s minds that fire is bad,” says Murphy. “I think we need better means of informing the public that fire has been part of the ecosystem for thousands of years.” Of course, proponents of prescribed burns don’t suggest performing them in regions near infrastructure. “You would be insane to light those up,” says Gill, “because they would go crazy.”

Resistance to controlled burns also comes from interest groups such as environmentalists, tourist agencies and logging companies. Sadie Parr, director of a B.C. activist organization called Wolf Awareness, explains the concerns: “If there are dens, if the pups are vulnerable, and if it happens fast and furious, they can’t relocate.” Meanwhile, Ramona Faust, an electoral director in Central Kootenay, B.C., says her constituents complain about air pollution during nearby burns. “People with respiratory issues are offended,” she says via e-mail. “People worried about the fire adding to greenhouse gas emissions are also offended.”

Ecologically, prescribed fires actually rejuvenate forests. “Fire sets the clock back to zero,” says Murphy of the University of Alberta. “The whole forest re-establishes itself.” When fire departments suppress natural fires, canopies grow old, thick and unhealthy. Young forests allow shrubs and berry bushes to grow, which Gill’s community currently encourages by pruning the forest with chainsaws. Meanwhile, fires offer new habitat for wildlife like moose and deer, and existing wildlife can often flee. Although Heathcott saw one wolf burn while trying to return to its den, he also recalls seeing rabbits and squirrels rafting down rivers to safety. During one controlled burn in Elk Island National Park, he says, “the buffalo were quite non-challant about the whole thing. They’d kind of just walk away from it.”

As for Heathcott, who prescribed his last burn nearly a decade ago, his favourite part of the job was returning to the site a decade later to see the new landscape—a long-term reason to do controlled burns today. “The Canadian biota is treated only by accidents, arson or lightning,” he says. “It’s been an uphill battle forever.”