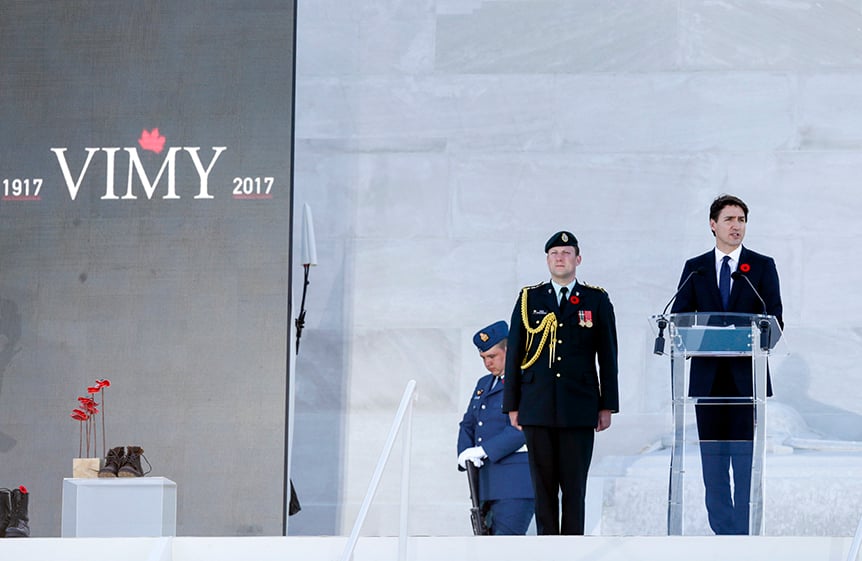 Canadian Prime Minister Justin Trudeau addresses the audience during a ceremony marking the 100th anniversary of the Battle of Vimy Ridge at the WWI Canadian National Vimy Memorial in Givenchy-en-Gohelle, France on Sunday, April 9, 2017. The commemorative ceremony at the memorial honors Canadian soldiers who were killed or wounded during the Battle of Vimy Ridge in April 1917. (Virginia Mayo/AP/CP)

Below is the full text of Prime Minister Justin Trudeau’s address at the Vimy Memorial commemoration of the centennial of the Battle of Vimy Ridge, as prepared for delivery.

The price they paid.

The burden they bore.

The country they made.

Think of it, for a moment. The enormity of the price they paid.

These were, for the most part, young men in their late teens and early twenties. Not professional soldiers. But they were superbly trained. And supported by months of painstaking preparation.

Yet for all that, they still required courage – to a degree that is hard to fathom.

They weren’t impervious to fear, these men. They were human. Homesick, tired, footsore and cold.

Yet still, they advanced. Uphill, through mud. Under fire. They advanced, fighting like lions, moving just behind a devastating allied artillery barrage.

There were strategic objectives. Vimy is high ground. It had been transformed into a fortress.

But if you read the accounts of the men who fought here, you’ll find they focused on other things.

They wrote to loved ones. They thanked them for parcels and letters. They asked about brothers and sisters. And they wrote about their fellow soldiers – those who’d fallen. Those still fighting.

Typical Canadians, they talked about the weather.

“The sun has been shining a couple times this last week,” reads a letter from William Henry Bell, dated April 7th, 1917. “The sun is a kind of stranger here. Say, that cake you sent was sure fine.”

The burden, they bore.

And, the country they made.

Because this, too, is why we’re here. Why we remember.

For in their ultimate sacrifice, these ordinary, yet extraordinary, men of the British dominion fought for the first time as the people of one country. Francophone, Anglophone. New Canadians. Indigenous Peoples. Side by side, united here at Vimy in the four divisions of the Canadian Corps.

It is by their sacrifice that Canada became an independent signatory to the Treaty of Versailles.

In that sense, Canada was born here.

The sculpture of Canada Bereft is an emblem of a nation’s grief. It’s an emblem of loving care – which evokes also the thousands of Canadian women who bravely answered the call, serving as nurses, or who provided critical support at home.

But this monument is also symbolic of Canada’s birth – and our enduring commitment to peace. As I see the faces gathered here – veterans, caregivers, so many young people – I can’t help but feel a torch is being passed. One hundred years later, we must say this, together. And we must believe it: Never again.

Friends and honoured guests, let us hold to the grace of William Henry Bell. To the grace of the ones who stood by their friends, through unimaginable hardship. Through death itself.

They were Canadians. They were valiant, beyond measure.