Prostitution laws: Over to you, Parliament 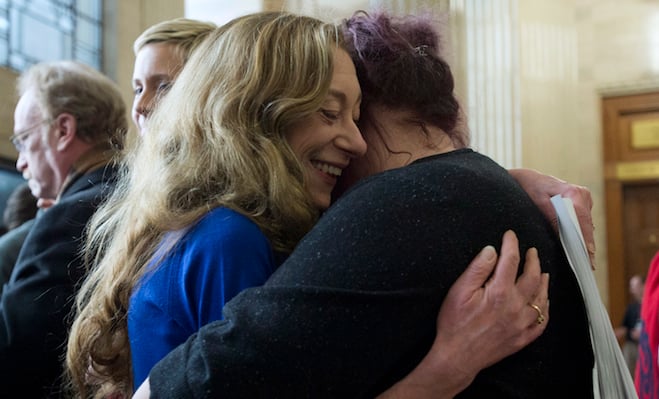 “It is not a crime in Canada to sell sex for money. However, it is a crime to keep a bawdy-house, to live on the avails of prostitution or to communicate in public with respect to a proposed act of prostitution. It is argued that these restrictions on prostitution put the safety and lives of prostitutes at risk, and are therefore unconstitutional.”

And so Chief Justice Beverley McLachlin, writing for a unanimous Supreme Court, summarized today’s decision in the first paragraph of a ruling that proceeded to find that Canada’s prostitution laws violate prostitutes’ security of the person under section 7 of the Charter of Rights.

Each of the three provisions at issue in the case were found to increase the risk to the lives and safety of prostitutes in different ways.

Criminalizing the keeping of bawdy houses ultimately restricts lawful prostitution to the streets or to “out-calls,” where the prostitute meets clients at a designated location (often the john’s home). The Court agreed with the trial judge’s finding that the safest form of prostitution is to work indoors, independently, from a fixed location. McLachlin notes that a “law that prevents street prostitutes from resorting to a safe haven … while a suspected serial killer prowls the streets, is a law that has lost sight of its purpose.”

The prohibition against living on the avails of prostitution of another person was found to be “overbroad” because it prevents prostitutes from hiring individuals like bodyguards. In effect, the law prevented prostitutes from taking measures to increase their safety.

Finally, the prohibition on public communication is also detrimental to the safety of prostitutes because it forces them into unfamiliar and isolated areas to conduct their business and makes it more difficult for them to screen clients and assess potential dangers.

The Attorney General of Canada argued that prostitutes are engaged in an inherently risky activity and that they can avoid that risk and “any increased risks that the laws impose simply by choosing not to engage in this activity.” McLachlin correctly points out that many prostitutes do not have a meaningful choice in this regard. Further, she reiterated that the activity itself is not illegal, writing “[a]n analogy could be drawn to a law preventing a cyclist from wearing a helmet. That the cyclist chooses to ride her bike does not diminish the causal role of the law in making that activity riskier. The challenged laws relating to prostitution are no different.”

The Court’s decision gives Parliament a year to draft new legislation to replace the old provisions. Notably, the justices shied away from making many grandiose statements or from trying to prescribe specific policy remedies. In effect, the decision gives Parliament ample room to sort out how to legalize, regulate or restrict prostitution in a way that conforms with rights under the Charter.

The government’s ability to “respond” to a Court decision in this manner is often referred to as an “inter-institutional dialogue” about constitutional rights. This dialogue does not always work. In fact, my own research suggests Parliament develops new legislation in response to the Supreme Court invalidating a law (or part of a law) in only a small minority of cases. This can happen for several different reasons. Sometimes the Court makes it clear the legislature’s original objective is unacceptable, as it ultimately did with respect to limits on prisoner voting rights in 2002. More commonly, Parliament is simply unwilling or unable to develop a new policy, which is what happened after the Court struck down the Criminal Code provisions restricting abortion access in 1988. In other cases the Court will simply tell the legislature what new policy provisions might be acceptable, as it did in 1995 when it struck down tobacco advertising restrictions and Parliament later drafted new legislation in accordance with the Court’s policy prescription.

In this case, however, it is clear that Parliament needs to develop new policies to replace the impugned provisions, and the Court was wise not to opine too heavily in its decision on what those policies ought to look like. The ball is firmly in Parliament’s court.

In one interesting passage, McLachlin even suggests that some of the old provisions could be revived in some fashion. “[The Court’s decision] does not mean that Parliament is precluded from imposing limits on where and how prostitution may be conducted.  Prohibitions on keeping a bawdy-house, living on the avails of prostitution and communication related to prostitution are intertwined. They impact on each other. Greater latitude in one measure — for example, permitting prostitutes to obtain the assistance of security personnel — might impact on the constitutionality of another measure — for example, forbidding the nuisances associated with keeping a bawdy-house. The regulation of prostitution is a complex and delicate matter. It will be for Parliament, should it choose to do so, to devise a new approach, reflecting different elements of the existing regime.”

It is unclear whether Parliament can simply criminalize prostitution itself, an avenue the Harper government might be tempted to pursue. On the one hand, McLachlin’s repeated reference to the fact that prostitution is currently a “lawful activity” weighed heavily on the Court’s reasoning, and seemed to imply a “if you’re going to allow it, you can’t enact restrictions that increase its risk” logic.

On the other hand, the government should be cautious about assuming outright prohibition is a workable, or constitutional, solution. It is undoubtedly the case that simple criminalization would lead to the very harms the Court found constitutionally impermissible today.

It is also worth noting that many of the harm-based issues dealt with here are applicable to assisted suicide, an issue the Court is likely to confront later next year. If today’s ruling is any indication, it presages the possibility that the Court may overturn its 1993 decision to uphold the Criminal Code’s prohibition on assisted suicide.

The Court has enunciated clear principles with respect to ensuring the health and safety of prostitutes, and it is time for an honest, responsible dialogue in Parliament about how to regulate prostitution in accordance with Charter rights. It should entail more than hand-wringing about how we re-criminalize behaviour that some deem immoral. Instead, a host of policy measures aimed at giving prostitutes meaningful opportunities to exit the profession—while also ensuring those in the profession have the autonomy and control necessary to make it as safe as reasonably possible—might be something to which all parties can agree.

Nevertheless, many will be skeptical that Parliament is up to the task of having a mature, rights-oriented debate about a controversial and divisive policy issue. The Supreme Court has given our elected representatives an opportunity to prove that cynicism wrong.

Emmett Macfarlane is an assistant professor of political science at the University of Waterloo. His book, Governing from the Bench: The Supreme Court of Canada and the Judicial Role, was published earlier this year by UBC Press.