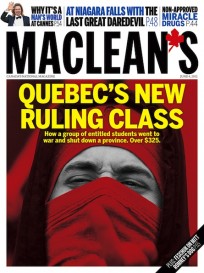 For its October 1, 2007 edition, Maclean’s published a Photoshopped picture of George W. Bush as Saddam Hussein on the cover with the cutline “How Bush Became The New Saddam”. Our June 8, 2009 edition had as its front page a perturbed looking Brian Mulroney with the word “UNBELIEVABLE” scrawled over his forehead. The cutline was all the more devastating: “Brian Mulroney’s pathetic last stand.” A few months later, we ran a picture of then Toronto Mayor David Miller sitting in a trash can, a banana on his head. “Toronto Stinks,” read the accompanying headline. Earlier this year, one of our cover depicted a veiled woman wearing an abaya and glaring at a naked young lady whose arms barely covering her breasts. “Veils: Who Are We To Judge?” read the headline.

I provide all of this as context for those who, over the last week or so, have accused Maclean’s of unfairly picking on Quebec. Get it? We’re cheeky, outrageous, provocative, pushy and occasionally hyperbolic with everyone—not just Quebec. Maybe we should publish a notice on every non-Quebec cover. Here’s Uncle Sam, giving the ‘up yours’ motion to Maclean’s readers. Here’s the pope, literally turning his back on the Catholic Church’s myriad sex scandals. Here’s Adolf Hitler, making an ideological return to Europe, Pakistan and Russia. You see, Quebec? It’s not all about you.

I refer, of course, to last week’s cover, which depicts a masked protester with “Quebec’s New Ruling Class: how a group of entitled students went to war and shut down a province. Over $325.” I saw the cover for the first time last Tuesday, and had the same reaction I always do when it involves the province of my birth: a mixture of amusement at what the magazine’s art department is able to churn out on a weekly basis, and mild giddiness at how the self-professed arbiters of Quebec’s apparently very thin skin would react.

I wasn’t disappointed. Setting the tone was Le Devoir, which while it wasn’t the first out of the block—La Presse, as usual, beat it to the punch—was certainly first in its ability to drum up 600 wounded, weepy, woe-is-moi words. Under the headline “Maclean’s attacks students”, reporter Alexandre Shields takes pains to note how the cover, “far from focusing on the nuances of the [student] movement,” depicts a “supposed student, totally masked, looking defiant.”

“The image clearly recalls that of a jihadist,” Shields reports.

Er, it was a pic snapped by a Reuters photographer on the streets of Victoriaville. To paraphrase Freud, sometimes a masked protester is just a masked protester, and not some fantasy conjured up by Toronto’s WASPy overlords to demonize a movement and/or an entire province.

I’ll spare you the comments posted at the end of Shields’s story. OK, maybe just one comment. “This confirms what I’ve thought for a long time,” writes Oeuvres Saint-Charles. “For the rest of Canada, Quebecers are frogs to be cooked.”

Over at Radio-Canada, meanwhile, radio host Louis Plamondon suggested my piece wasn’t analysis but “opinion”, and suggested I was saying the protesters were Nazis because I noted how they were throwing up “cheeky Nazi salutes.” The Twittersphere was equally incredulous, though apparently without first reading the piece. “You compare the Stanley Cup riots in 1993 with the student protests? You have understood nothing.” (I didn’t, and I do. But thanks.)

About the only person to offer insightful, measured criticism was Benoit Dutrizac, a radio host at 98.1 FM. You can listen to our exchange here (second segment from the top.) Dutrizac and I don’t see eye to eye on many things, but at least he doesn’t take it as a given that Maclean’s is out to stick it to Quebec.

Over the weekend, La Presse’s Rima Elkouri took on the tone, if not quite the language, of the charming cooked frog analogy in a column entitled “Le Mépris” (“Contempt”). Elkouri took it upon herself to chide Maclean’s for “hitting the student strikers with a truncheon with (another) controversial cover.”

“Many people saw another example of Quebec bashing on the part of the English Canadian magazine that, two years ago, put a photo of a mafioso’ed Bonhomme Carnival, and qualifying Quebec as ‘The most corrupt province in Canada,” sniffs Elkouri. “These people surely aren’t wrong. That a national magazine, Canada’s equivalent to Time, would use such a tendentious front cover is frankly depressing.”

Yes, depressing… sort of like how, in her 800-word diatribe about Maclean’s supposed Quebec bashing, Elkouri never once refers to a certain article, printed in the New York Times last week, that compares Quebec to some backwater Putin-era Russia gulag where the rule of law is dictated by a power-hungry oligarch by the name of Jean Charest.

“When Vladimir V. Putin first came to power in Russia, Quebecers could not help but laugh. Poutine, as he is called in French, is also the name of a Québécois fast-food dish made of French fries, gravy and cheese. But these days the laughter is over, as Quebec gets a taste of Mr. Putin’s medicine.”

The pair goes on: “Bill 78 has been fiercely denounced by three of four opposition parties in Quebec’s Legislature, the Quebec Bar Association, labor unions and Amnesty International.”

These two Université de Montréal professors apparently forgot that the law, constitutionally dubious as it may be, came into being thanks to a majority vote in Quebec’s National Assembly—by the very government Quebecers themselves have voted into power three times in the last ten years. The nightly protests, meanwhile, continue across the province, even though they are often declared illegal at their outset thanks to the new law. If Charest is emulating Putin, he’s doing a piss poor job of it.

Yet these spurious comparisons to Russian autocracy, not to mention the barely veiled suggestions that Americans refrain from visiting Quebec this summer because the its government “rides roughshod over its citizens’ fundamental freedoms”, hardly elicited a peep. Some even reveled in it.

You have to wonder whether for Quebec’s self-appointed defenders, some hyperbole is worth believing.