Hansard is the final word on what our politicians say, but what happens when the record doesn't match reality? 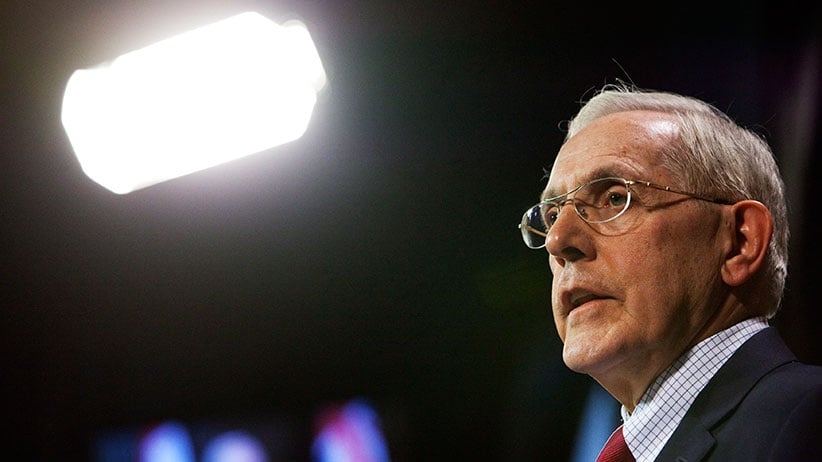 If one listens closely to what took place inside the Ontario legislature on May 4, it certainly sounds like Liberal MPP Bob Chiarelli said NDP leader Andrea Horwath “pees all over the map” when it comes to her energy policy. Offensive? Unquestionably. But read the official Hansard transcript of what took place inside Queen’s Park in Toronto that day and Chiarelli said: “she-she’s all over the map.”

From what started as a comment about the NDP leader raising too many issues in a single question, a debate has ensued over whether Hansard—the reporting service tasked with providing the official transcript of debates in Ontario’s legislature (and in fact all legislatures across Canada) since 1944—has gone too far in its edits. After all, the service is meant to be “the word-for-word account of the daily proceedings of the House and its committees,” according to the Legislative Assembly of Ontario, which might explain why NDP MPPs echoed their frustration again in the past week over Hansard’s tweaks. Yet it’s hardly the first time the tinkering of Hansard transcripts has drawn ire.

What constitutes verbatim depends on the jurisdiction. Light edits are common, explains Lenni Frohman, president of the Hansard Association of Canada. Besides the fact that everyday speech is riddled with the frequent “um” or “ah”—not to mention multiple members talking at once amid an eruption of heckling—a member might repeat the word “to” several times before settling on a different preposition altogether. “An editor might look at that verbatim, and say he was just spitting out a bunch of false starts, so to speak,” Frohman says. “The most common types of edits are things that occur in the verbal nature of the debate.”

But while quick edits that do not alter what was said are necessary for readability, what if the words many heard during the debate—be it live or during a broadcast after the fact—clash with the ears of Hansard editors?

Karen Fischer, the managing editor of the Ontario Legislature’s Hansard reporting services, told the Ottawa Citizen they won’t change words if what the person said was embarrassing. Her team edited the transcript draft of “she pees all over the map” to “she-she’s all over the map” after giving the audio a closer listen. (The Ontario Legislature’s Hansard reporting services declined to comment to Maclean’s.)

At the Legislative Assembly of Saskatchewan, where Frohman is the director of Parliamentary publications, “if a member clearly said the wrong word, that is the word that goes in,” she says. “Even if the member chose the wrong word, we won’t correct him or her.” But Frohman can’t comment on the specifics for how the Hansard reporting in Ontario’s legislature works, saying each jurisdiction would work within the rules of its legislative assembly or parliament.

The flare-up has brought attention to a function of Canada’s parliamentary system that is mostly overlooked by the public.

Named after Britain’s Thomas Hansard, who published reports of the U.K.’s parliamentary debates in the 19th century, Hansard reports were first adopted by Canada’s federal parliament in 1880. Within a year of its use, one MP tried to have it abolished, to which then-prime minister John A. MacDonald responded:

As a matter of history, it is of the very greatest importance that the remarks of every hon. member, who has a responsibility as the representative of the people should, if we can afford it—and we can afford it—be as fully recorded in the official report as those of a leader. I hope we shall not commit such a great mistake, I hope we shall not make such a relapse into barbarism as to throw over the only means by which after generations shall be able to learn what were the subjects of interest engaging our attention, what was the style of speaking and the style of thought, and what were the moving impulses of the people and their representatives in Parliament.”

But who’s to guarantee Canada’s first prime minister spoke so eloquently in the House that day without stumbling over a word or two? According to House of Commons Procedure and Practice, “Members may suggest corrections to errors and minor alterations to the transcription but may not make material changes in the meaning of what was said in the House.” In essence, MPs can try to finesse their own words to their advantage, though editors of the transcription are able to decline those suggestions. According to a spokesperson for the Office of the Speaker of the House of Commons in Ottawa, a typical day on Parliament Hill produces 70 pages of Hansard transcripts, with a dozen or so requests for minor changes.

In some instances, one missing word can make all the difference. For example, when an MP teased a Liberal minister about shaking his hair to solve a softwood lumber trade dispute in 2001, Jean Chrétien fired back by saying: “Mr. Speaker, some don’t have long hair and shake a lot. It’s the case of the Leader of the Conservative Party and others.”

Rather than let the official transcript stand with words that could be perceived as making fun of then-Conservative leader Joe Clark’s habit of shaky hands, Chrétien’s office requested a minor tweak and the official record reads: “Some people do not have long hair and shake it a lot.” Doubling down on the Hansard edits, Chrétien’s aides went on to say that interpreting the prime minister’s comments in any other way would be “malicious.”

In Manitoba in 2009, meanwhile, the provincial legislature’s House Speaker ordered that Hansard take a better word-for-word account of the day’s speeches after a justice minister claimed porcupines had “pines,” before making the correction to “quills.” Hansard omitted “pines” altogether from its daily account. Embarrassing or not, what was said should be part of the record.

Back in Ontario, Chiarelli denied ever saying the word “pees.” Nevertheless, he apologized if his unclear pronunciation made it sound as though he said something offensive.

His apology is on the official Hansard record.