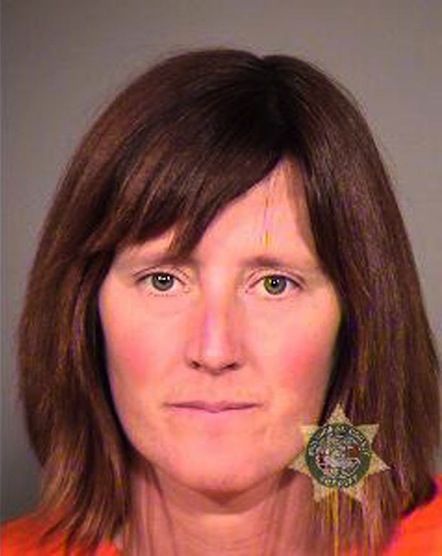 An undated file photo from the Multnomah County Sheriff's Office in Portland, Ore.

For almost 16 years, from her first acknowledged act of sabotage, North Vancouver eco-warrior Rebecca Rubin must have feared this day of reckoning would come. After years on the run, the 40-year-old stood in a Portland, Ore., courtroom Thursday morning and pleaded guilty for her role in a sabotage and arson spree across the U.S. west that turned her and fellow members of the Earth Liberation and Animal Liberal Front into some of the FBI’s most wanted fugitives.

Rubin admitted her role in four acts of arson and sabotage spanning four years and three states as part of an autonomous cell of 18 U.S. and Canadian eco-terrorists who in total laid waste to $48-million worth of government installations, research facilities and industries in the U.S. west that offended their world view.

While Rubin admitted to her guilt in what the FBI called “a campaign of domestic terrorism”, she refused to name any of her co-conspirators, federal prosecutor Stephen Peifer said in an interview. Under the plea agreement “she has to be 100 per cent cooperative but she’s not required to name names,” Peifer said. If there are further arrests, however, and she is called to testify, she can be cited for contempt if she refuses, he said. He is asking for a sentence of no more than 90 months or 7 1/2 years, while Rubin and her lawyer are seeking a sentence of 60 months. Sentencing is set for Jan. 27, after a pre-sentence report is completed, but the final decision on sentence rests with federal Chief Judge Ann L. Aiken.

Rubin admitted to her part in the Nov. 10, 1997 break-in at the U.S. Bureau of Land Management wild horse corral in Burns, Ore. There, Rubin and at least four other members of their secretive cell, helped free 400 horses, some of which were destined for slaughter, before setting fire to a barn, and corrals. She admitted to her part in transporting fire-bombs that a co-conspirator William Rogers used in October 1998 to torch much of the Vail ski resort in Colorado to protest an expansion that allegedly threatened Canadian lynx habitat. The fires destroyed the main lodge, two restaurants, lifts and outbuildings, causing an estimated $15 million in damages and $13 million in lost revenue. The FBI called it the single costliest act of “eco-terrorism” in U.S. history.

She admitted to a failed attempt to burn down the Medford office of U.S. Forest Industries on Dec. 22, 1998. Rubin also participated in what appears to be her final criminal act, a break-in at the Litchfield wild horse and burro corral near Susanville, Calif., on Oct. 15, 2001, where they attempted to free the animals before setting fire to a hay-storage barn. That arson, barely a month after the 9/11 terror attacks, may have been the undoing of the Elves, as the saboteurs called themselves. The U.S. government poured massive resources into the FBI, the Department of Homeland Security and other agencies dedicated to fighting terrorism both foreign and domestic. Under stiffened sentencing laws, Rubin could have faced a minimum sentence of 30 years for the California arson alone, since it used a timed incendiary device. California prosecutors only reluctantly agreed to forego that penalty during the extended plea negotiations.

It’s likely Rubin—who has been in custody since surrendering at the U.S.-Canada Border at Blaine, Wash., last November—could have plea-bargained for a lighter sentence had she named names. Certainly most other members of the cell of eco-saboteurs were quick to rat-out their compatriots in exchange for lighter sentences after the FBI began a sweeping series of arrests in December 2005.

Rubin remained free and in hiding in Canada after being identified by several of her co-conspirators. She was placed on the FBI’s most-wanted list. One FBI agent, Colorado-based Jane Quimby, was so determined to capture her that she even traced a dog the animal-loving Rubin had adopted from a pound in California. In frustration, Quimby crafted an unofficial FBI wanted poster for the dog, Nezzi, alias Inez, though plans to distribute the poster to veterinary offices in the Vancouver area fell through.

Rubin, after long years on the run in Canada, approached Vancouver lawyer Ian Donaldson several years ago to negotiate a surrender. “Part of it was she wanted to get it behind her,” Donaldson told Maclean’s in an earlier interview. “She’s spent a lot of time reflecting, and I think she is truly remorseful for the consequences of her misguided actions. She gets it. Today, she gets it.”

Peifer said any expression of remorse Rubin may have would not have been expressed at Thursday’s hearing. “That is something that is assessed at the time of sentencing, under what we call acceptance of responsibility”, he said. “In order to benefit from that she has to accept responsibility and show a sufficient amount of remorse.” Rubin will get credit for time already served—currently 11 months—and she is eligible for up to 54 days a year off her sentence for good behaviour. There are no provisions for early parole.

Two remaining members of the cell remain at large. Canadian-born Josephine Sunshine Overaker, who may have fled to a Spanish-speaking country, and Joseph Dibee, who the FBI suspect may be hiding in Syria, where he has relatives. If they are ever captured, Rubin may face another test of her loyalty to the cause if she is compelled to testify.