'When I first started, I was all gangly and awkward'

Debbie Brill figured out how to jump higher

Debbie Brill never jumped like the other kids. When it came time to try high jump, most of her classmates used a technique called the straddle, which all the world’s best high jumpers used at the time. They would lift off and rotate their bodies face down while lifting their legs individually to clear the bar.

But that didn’t feel natural to Debbie. She preferred her own style and, growing up in Aldergrove, B.C., she had no coach to tell her otherwise. At first she’d run straight at the bar, jump and tuck her legs underneath. Then, she combined her jump with the scissor technique, lifting one leg after the other, as if the bar were a tall hurdle.

At the time, there were no soft foam mattresses to make the descent less daunting. Instead, the landing area was a significantly less-welcoming pit of sand or sawdust—or a combination of the two, depending on what her elementary school had access to at the time. “There was no way anybody was going to land on their back in sand or sawdust,” Debbie says. “It would be too self-destructive.”

But when Debbie saw a foam-rubber landing mat for the first time, not even a teenager yet, she decided to try something completely different. Without thinking, and simply letting her body do what felt most natural, she took off with her face looking up at the sky, lifted her hips such that she was almost perfectly horizontal in the air, and fearlessly landed flat on her back. She honed her own unique technique, her only guidance being a curiosity about how to jump higher, and her body naturally began to rotate midair—head first, feet last—allowing more time to elevate her hips above the bar.

When her parents enrolled her at a track and field club in nearby Langley, B.C., recreation director Pete Swensson didn’t try to change Debbie’s effective—albeit unusual—technique. Instead, he dubbed it the “Brill bend” and let her jump her way.

Everyone figured she was one-of-a-kind. That is, until a bunch of Debbie’s friends rushed over one day at a competition in Vancouver to tell her about an older boy from the U.S. jumping the same weird way she did. As it so happens, several of this boy’s friends rushed to tell him about the little girl jumping just like he did. 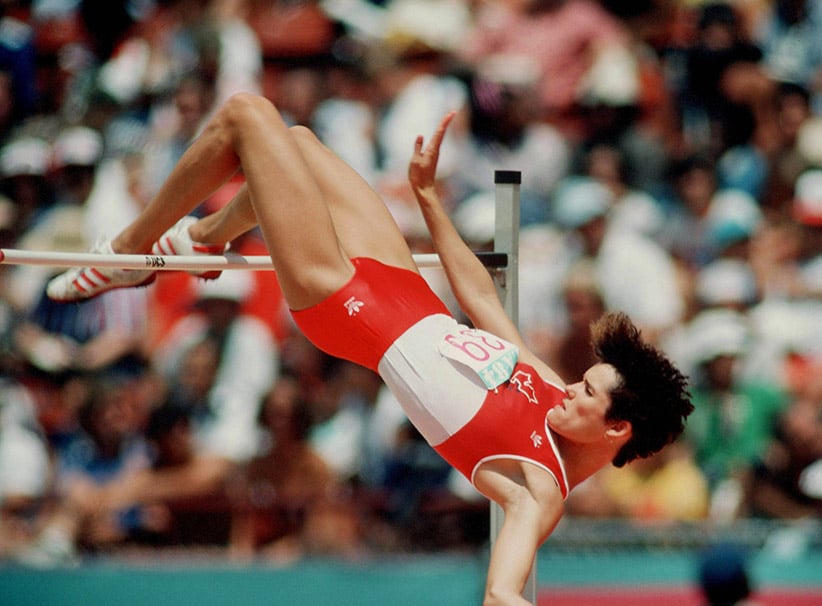 Debbie was far too shy to introduce herself at the time, but a few years later she saw his name being celebrated at the 1968 Olympic Games: Dick Fosbury. Not only did he win the gold, the track and field world was abuzz about his unique technique, dubbed the “Fosbury flop.”

Debbie, too, was breaking high jump records using the “Brill bend.” In 1970, only 16 years old, she was the first North American female to clear six feet. After taking part in several Olympics, Debbie won gold at the World Cup in 1979. Critics told her she couldn’t keep jumping if she wanted to raise a family, but she proved them wrong. In January, 1982, five months after she gave birth to her eldest son, she took part at a competition in Edmonton, where Debbie set the indoor world record, clearing 1.99 m.