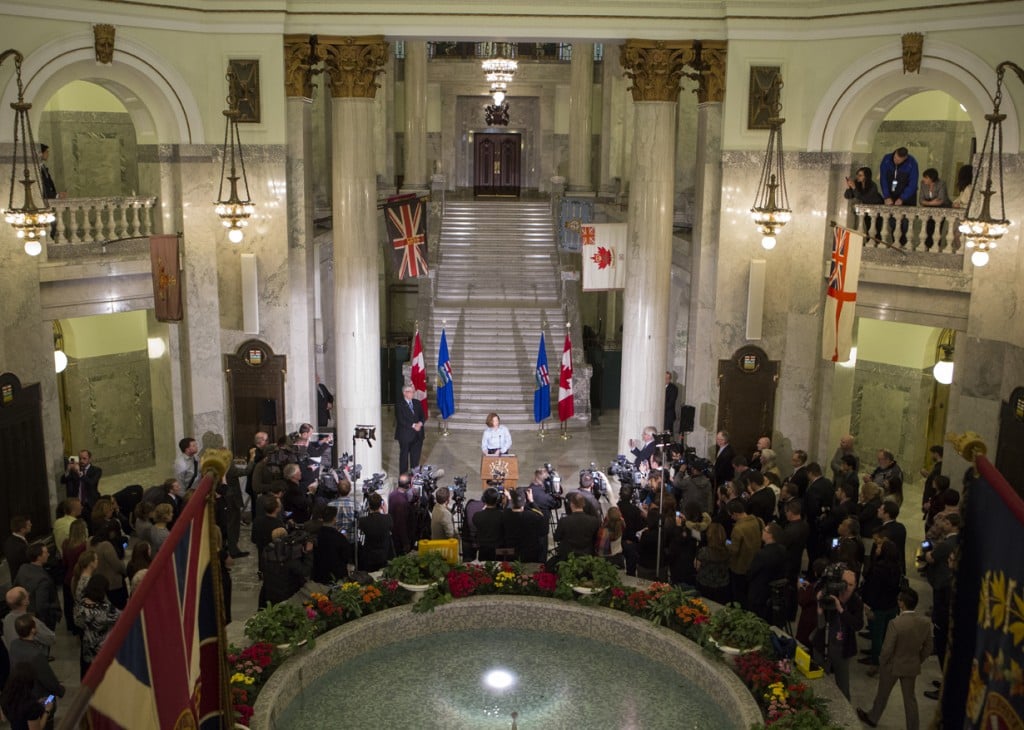 It was a tearful surrender for Alison Redford Wednesday night as she gave a curiously backward resignation speech, grocery-listing the accomplishments of her government’s two years in power before announcing that she will step aside as Premier of Alberta on Sunday. Among these accomplishments, Redford trumpeted a “fully balanced” 2014 budget, which is “balanced” in an unusual sense of that term meaning “expenditures far exceed revenues, but in a nice way.”

That sort of cynical language was, it must be said, part of her problem with voters. The Alberta budget became more cryptic under Redford, and the usual accounting fictions have been stressed to the breaking point, with revenues assigned hugger-mugger to “operating” and “capital” purposes with no very clear line of demarcation between. If you think Albertans don’t pay attention to that sort of thing, you don’t know us too well.

There will be a temptation to sum up Redford’s ouster by citing her clownishly expensive December trip to South Africa to attend the funeral of Nelson Mandela. Redford, in truth, had almost literally every kind of problem you can imagine a Westminsterian political leader having, all of them chronically. Her relationship with her caucus was dire, as became obvious to the news-reading public in the last fortnight. Any defenders she might have had were keeping pretty quiet, and no one seemed to expend much effort reading from an orchestral score of talking points. Few MLAs ventured beyond muttering “She needs to make some changes.” From some of these, it was pretty obvious that the change they had in mind was the one that happened tonight.

The bill for the South Africa trip was absurd, but it was arguably genuine government business, and Mandela’s death was unscheduled. “Unscheduled,” however, does not mean “unforeseen.” The South Africa story had what you might call multiple negative resonances. It was natural to think that the bungling of the logistics was linked to the high personnel turnover in the Premier’s Office. And the destination of the trip reminded everyone of Redford’s past as a globetrotting problem-solver for the Commonwealth and for NGOs. Deputy premier Dave Hancock tried to defend the premier by telling the Globe’s Kelly Cryderman, “No one goes back to South Africa and comes back within a week for the fun of it.” Not even someone who lived there, made friends, and almost didn’t come back? Pull the other one, Mr. Hancock.

(Hancock, incidentally, is seen as the most likely choice to be chosen as Alberta’s first-ever interim premier when the PC caucus meets tomorrow. Redford’s decision to resign came after a day in which the pair spent hours in private discussions, and Hancock was at her side for the resignation announcement.)

Redford’s rule, let the record show, did not die merely of South Africa Disease. It is easy to forget the earlier mini-scandals of her time in office, each of which gave just a few voters one more reason to resent the Progressive Conservative government. Some, like the controversy over queue-jumping in the health-care system, were partial holdovers from Ed Stelmach’s administration. Some, like Premier Redford’s sister getting caught using Calgary Health Region funds for a PC party event, were holdovers from Stelmach’s time, which damaged the premier personally anyway. The party never succeeded in dispersing the poisonous miasma of small events whose specifics are already forgotten, like Redford’s fibbing about having been involved in awarding an enormous tobacco-litigation contract to her ex-husband’s law firm.

In any event, there were a half-dozen other expense records for airplane trips that Redford faced questions about, or had already apologized for. The press questions were starting to squirm outward into other dubious-looking expenses. The PC party brass, which had already received repeated assurances from the Premier’s office that the worst was over, concluded that Redford’s “difficult week” had the potential to stretch into a horrifying future of uncertain duration. Constituency heads were meeting in Edmonton and Calgary to discuss a formal demand for the leader’s resignation even as she held her final press conference as premier. (Party president Jim McCormick is said to have had no advance warning of the announcement.)

Alison Redford, as the ex-daughter-in-law of Joe Clark protégé Jim Hawkes, is what you might call minor red Tory nobility. Her feeling for what the leadership of a political party requires was established early, and outside Alberta, in a pre-Reform Party universe. Redford may have been a victim of evolving standards, when it comes to what the public expects from politicians. You can feel free to scribble “sexism” in the margins of the death certificate, too, if you like. The advent of some female premier who can establish a Margaret Thatcher-like rapport with voters is certainly beginning to feel a little overdue in Canada.

Redford’s resignation completes the transition of the Alberta Progressive Conservative Party from unstoppable electoral force to the Sick Man of Canadian Politics. Sick men have risen from their deathbeds before, and the opposition Wildrose Party may not be ready to complete a journey to power that is following the Reform Party model. (You will recall that this involved negotiating quite a few twists and turns and a couple of avalanches and volcanos.)

But unless Naheed Nenshi is interested in riding to the rescue on the Calgary Stampeders’ touchdown horse, or Brett Wilson feels like pulling a Pierre Karl Péladeau, it is hard to imagine immediate, cheap salvation for the PCs. Nenshi will have to think about the opportunity that has suddenly appeared, but I will repeat what I have already more or less said of him: he really, really likes being Mayor of Calgary.

A half-hour after Redford’s resignation, Wildrose Party leader Danielle Smith was already pushing the new narrative: after four decades in power, any party’s ability to reinvent itself would be compromised. This seems to be obviously the case. Politician expenses and regional spending are being scrutinized more closely than ever. Institutions like the Alberta Treasury Branches, the transport department, and small local colleges can no longer be abused for partisan purposes as freely as they were in Alberta’s past.

Professional reporters have mastered the art of FOI, but even that black art may be of minimal destructive power compared to the rise of social media, data journalism, and, in general, the ability of what the Chinese call the “human search engines” to investigate political curiosities and brew trouble. (And it’s a good thing, too, with the bench strength of Alberta’s broadsheet newspapers somewhat depleted.)

There is a wider question of whether the sort of longevity enjoyed by premiers like Ernest C. Manning or Bill Davis is still possible. At its next election, whenever that is and whoever wins, Alberta will return its fourth different premier in a row. That may be the new normal, not just here but everywhere. What is certain is that a 20th-century party which depends heavily on tribal loyalty and deep patronage networks is bound to find survival especially difficult. This one has already had a near-death experience. It would be wise for the PCs to choose a leader to whom humility, frugality, and good humour all come naturally. Look around. Who ya got?