Reel justice prevails: This B.C. man won a 30-year battle to fish in a public lake

After a long dispute pitting local anglers against wealthy landowners, public interests against private, a recent court decision could set a precedent for public access to Crown-owned waters. 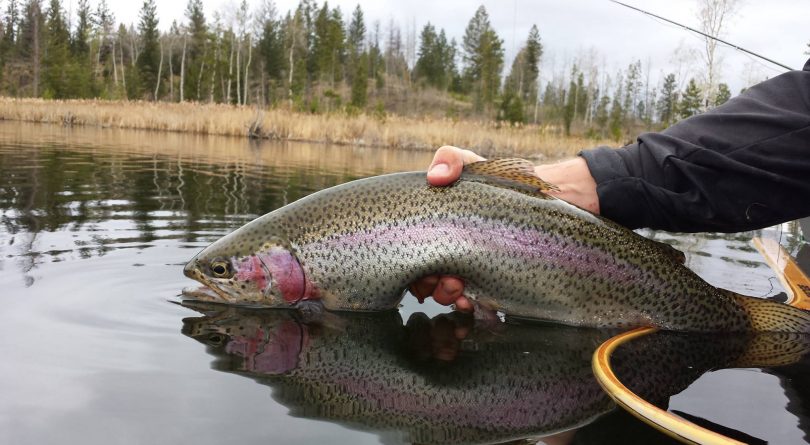 Rick McGowan started ﬁshing in Stoney Lake and Minnie Lake in B.C.’s Interior in the 1960s when he was 14 years old. The lakes were a good stopping point along Stoney Lake Road, a gravel route the McGowan family travelled almost daily from Merritt to a ﬁshing resort on Paradise Lake owned by Rick’s parents, Hughie and Ruby.

The province stocked both lakes with rainbow trout, and Minnie Lake was the place to catch a ﬁsh to brag about, ﬁve or even eight pounds. “Minnie Lake has always had a great ecosystem for providing big ﬁsh,” says McGowan. “It had a lot of shrimp and invertebrates for the ﬁsh to feed on.” The lakes were surrounded by land owned in part by the Woodward family, founders of an eponymous department store chain, but were themselves Crown property and a popular spot for residents, including neighbouring First Nations.

One day—McGowan ﬁgures around 1988—the family found the gate to Stoney Lake Road closed and padlocked. It was the start of a 30-year dispute, pitting local anglers against wealthy landowners, public interests against private, and culminating in a recent court decision that could set a precedent for public access to Crown-owned waters.

Today, the owner of that gate is American billionaire Stan Kroenke, who owns a stable of professional sports teams including the NBA’s Denver Nuggets and the NHL’s Colorado Avalanche, and who is married to a Wal-Mart heir. He bought the Douglas Lake Ranch in 2003 and has been snapping up adjacent land ever since. He’s now the largest private landowner in B.C., with rights to almost 500,000 hectares of deeded and Crown grazing land under his Douglas Lake Cattle Company.

RELATED: What it feels like to go lobster fishing in P.E.I.

After years of disputes over access, which included RCMP arrests for trespassing and a failed petition from the Nicola Valley Fish and Game Club—of which McGowan is a member—the Douglas Lake Cattle Company sued the club. Lawyers asked a judge to clarify whether Stoney Lake Road is public, whether the public should be permitted access to the lakes and who owns the ﬁsh.

Douglas Lake Cattle Company did not get the answers it wanted when B.C. Supreme Court Justice Joel Groves rendered his decision in early December. Stoney Lake Road is public; the lakes must be reopened for catch-and-release ﬁshing; and the ﬁsh are wild, even if the lakes are stocked, the judge found.

More than a mundane court ruling, the decision is being received as a declaration afﬁrming public rights to cherished water bodies at a time when private interests are rapidly closing them off. The court heard that the company dammed Stoney and Minnie lakes to make them bigger, partially flooding the road in the process. The company, which operates several private ﬁshing lodges, argued that the new expanded borders of the lakes were private. The ranch also put large rocks and logs on the road “to make it impossible to pass,” writes Groves.

All the while, the province knew. In 1996, the district highways manager wrote a letter to Douglas Lake ranch manager Joe Gardner, asking him to remove the locked gate and install a cattle guard. Gardner did not comply. “Mr. Gardner has acted, as manager of the DLCC, as someone who is above the law,” writes Groves.

RELATED: As the Arctic Ocean melts, the fishing talks begin

The government came in for even greater rebuke in a scathing epilogue to the decision—a rare document Groves presented in court after his ruling. In it, Groves writes that “it makes no sense to me that the Crown would retain ownership of the lakes, only for there to be no access.” He urges the province to re-examine its trespassing laws and “guarantee access to this precious public resource.”

Christopher Harvey, lawyer for the Nicola Valley club, says he hopes this ruling will spur the province to protect right of access to public lands. “It is the easiest thing in the world for a landowner to put up a private property sign and just lock a gate over a public road,” Harvey says. “Ninety-nine per cent of the public will assume it is private property.”

B.C.’s natural resources ministry says it’s reviewing the judgment before deciding its next steps, while a lawyer representing Kroenke’s company says it is considering all options, including appeal. Neither Kroenke nor ranch manager Gardner agreed to an interview.

The gate to Stoney Lake Road isn’t the only one with a lock. There is legal action in the works over access to Corbett Lake, another Crown lake partially on Douglas Lake Cattle Company property. McGowan, now 66, sees this as his ﬁght to ensure his eight-year-old granddaughter can ﬁsh in Crown lakes, just like he did as a boy. “The locking and blocking access to public lakes all over B.C. is escalating like an epidemic,” he says. “If we don’t stop it, you’re not going to go off the blacktop without paying someone to go there.”