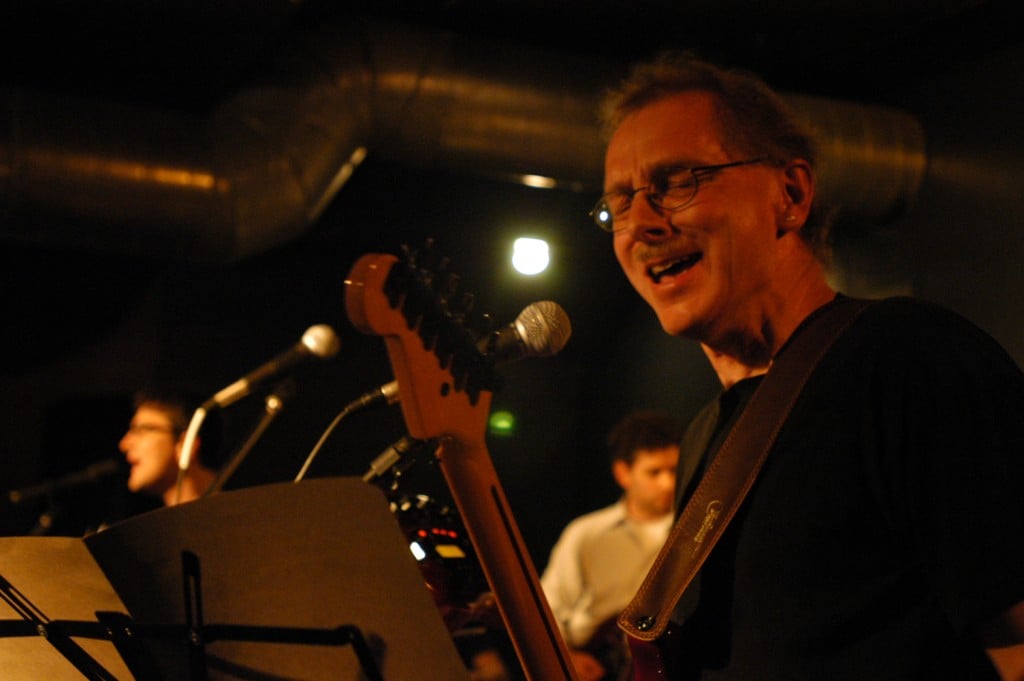 Amid the grief and dismay that has rocked Maclean’s at the news of our colleague Peeter Kopvillem’s death at 61* after a long illness, it was gratifying to note that obituaries from Estonia identified him first as a musician. He was a ferocious blues guitarist, who preferred a gentler acoustic accompaniment for his own compositions inspired by the folk music of his family’s native Estonia, where his father was a prominent cabaret singer.

But for his colleagues at Maclean’s and elsewhere, Peeter was also a brilliant editor, fastidious in checking writers’ copy, patient in encouraging their best work, happy to join colleagues in gossip or to hear their confessions. He joined Maclean’s as an assistant editor in December 1984. From 1993 to 1995, he worked in Munich for Radio Free Europe, continuing his lifelong dedication to democracy and free speech across Europe. He replaced Toomas Hendrik Ilves at RFE. These days Ilves is the President of Estonia. In that capacity, in February, he bestowed the Order of the White Star, V Class on Kopvillem for his work as “safekeeper of the Estonian mindset in Canada, journalist and musician.”

Maclean’s will post reminiscence from Peeter’s former colleagues, who include some of the most prominent Canadian journalists, tomorrow. In the meantime, here is some of his finest writing: An article he wrote for us in 2004, when the European Union expanded to include 10 new countries, including Estonia. —Paul Wells

A Place in the Heart: We learned about the lost Estonia. But what to do once it’s found?

I am 10 years old, tramping with a group of boys through the woods an hour’s drive north of Montreal. The land is owned by the city’s Estonian community — it’s where I will spend the summers of my formative years, a place I will forever identify as my spiritual home. Deerflies drone around my head. Ferns swish against my feet. The light filtering through the trees seems green, almost fluid.

I have a rifle on my shoulder.

We’re being taught to shoot, in this place where children laugh and parents remember. They tell us stories about their lost country. They say that marksmanship builds character, teaches you how to focus. But we know there’s more. Someday, we will free the homeland from Moscow’s clutches.

Four decades later. This past weekend we raised a glass or two as Estonia and seven other former Communist bloc nations took their place in the European Union, along with Malta and Greek Cyprus. It’s still a little hard to believe, as is the fact that almost 13 years have passed since the implosion of the Evil Empire (how we loved that Ronald Reagan phrase). Entering the EU didn’t happen to universal acclaim in Estonia: some critics predict trouble for a small country of 1.4 million people lost in a behemoth of 450 million. Fully a third of those who took part in last fall’s referendum voted against joining. But I can only concur with the EU’s statement after that vote: membership in the union “marks Estonia’s return to its rightful place in Europe, and sets the seal on a process of change that has been both difficult and hard-won.”

Still . . . excuse me for going a little Baltic, but I feel somewhat bittersweet about it all. Because even as Estonia flourishes, our Estonian-Canadian community here in Canada, of which I have been an active member all my life, diminishes.

Don’t get me wrong — it’s not on death’s door yet. And in part it’s a natural evolution for all ethnic groups in this country: successive generations of hyphenated Canadians yield fewer and fewer people who try to keep their heritage alive. But the numbers are telling. The first worldwide Estonian festival, organized in Toronto in 1972, attracted 20,000 people. The last one held in this city, in 2000, drew about 4,000. Summer celebrations that once boasted attendance in the thousands are now lucky to get 500. In 1973, 60 kids finished the Toronto Estonian supplementary school. This year, there will be just nine graduates. And so on.

It’s more than statistics. Those who established the institutions I’ve known most of my life — community centres, churches, choirs, a thriving credit union, newspapers and more — came here some five decades ago motivated by one burning desire: independence for Estonia. Now that it’s been achieved, we’ve lost a large part of our raison d’être. There are those in the former East bloc who regret the passing of Communism. “Life was better then,” they mutter.

Sometimes I think the same thing, albeit for different reasons.With the acceleration of events in Europe, much of our attention is now focused on the old (new) country. Many of us have personal connections there. Visits in the summer are a matter of course. A number of Estonian-Canadians, both old and young, have moved there. With Estonia a member of the EU, that trend may accelerate.

There’s been a corresponding movement in this direction. The teaching staff at our Toronto school now includes younger native-born Estonians. More and more performers at our functions, or speakers at our ceremonies, are flown in from Estonia. That’s meant a certain revitalization. But these are all things that we used to do, and do well, as members of a free-standing immigrant community that has been a small but vibrant part of the Canadian mosaic. Are we now becoming, in essence, nothing more than a provincial adjunct of a tiny country 10,000 km away?

Those who are active in our remaining organizations are wrestling with such questions as they try to reorder priorities and change the way things have been done for decades (no easy task — expatriate Eastern European communities are generally conservative). But here’s an interesting thing: according to the 1971 census, 18,810 people in Canada identified themselves as being of Estonian background; in the 2001 census, that number was up to 22,090.

They’re out there, so how do you convince new arrivals from Estonia that what was established here, by displaced persons who constructed dams, mined copper, attended university in spite of language barriers, built lives, is worth preserving and reinvigorating? And how do you persuade lapsed ethnics (what else can you call them?) that they can be not only better Canadians but also better world citizens thanks to their heritage, knowledge of another language, and an intimate understanding of injustice? Because that potent mix has an effect. “Standing up for Estonian independence was right not because of my background, but because as a Canadian I felt outrage that Estonians did not have rights that were second nature to me,” says Peeter Einola, 50, born and raised in Toronto and now vice-chairman of the Estonian (Toronto) Credit Union. “I felt the same outrage with respect to apartheid in South Africa and racial intolerance in the United States. Being Estonian helped me to understand and feel this sense of wrong.”

I now get a sense that, in our rush to embrace the new and focus on what’s happening overseas, we’re in the process of forgetting much of what we accomplished in Canada. There seems to be a form of forgetting going on in Estonia as well. Talk to some people there, and it’s as if the bad old days never were. To some degree that’s understandable, says Heiki Ahonen, a former dissident and now chairman and managing director of Estonia’s Museum of Occupations and the Fight for Freedom, which opened on July 1, 2003. It’s dedicated to chronicling what Estonia endured during the war and the half-century that followed. “Memories are selective,” Ahonen says.

Too many people still alive played a part in the old Communist regime, and so, he notes, “forgetting is a way of preserving one’s sanity. But we cannot allow the past to be forgotten.”

A museum, in this case dedicated to preserving the good, might not be a bad idea for us as well — before we face the danger of our ethnic heritage being reduced to a half-remembered Easter egg design or a few hesitant steps of a folk dance. That goes for all Canadians whose ancestry lies among the new European Union members from the former Communist bloc. According to the last census, we number nearly 1.4 million (add those whose ancestral homelands are evolving more slowly, such as Ukrainian-Canadians, and the number balloons to more than three million). Perhaps one overall museum here, to commemorate the Canadian experience, and individual ones overseas, to keep alive what a branch of the tribe lived through.

Because things are already being lost. The spot where I spent my summers is mostly empty now, except for the people who still have cottages there. Twelve years ago, some friends who I grew up with and still live in Montreal tried to breathe new life into the place by instituting a family camp for those who have a connection there.

And so, over the August long weekend, there are again kids who laugh and parents who remember. But for the rest of the time? As one elderly cottager wistfully told me, “It’s as if the birds don’t even sing.”

I raised a glass to Estonia and my friends and relatives there over this past EU weekend. Good on you, I said. But the toast was also to a small community in Canada that has managed to do great things. And to a child with a small rifle, walking along a forest path that’s long since overgrown.

CORRECTION, May 12, 2016: Peeter was 61 years old when he passed away. A previous version of this story contained incorrect information. Maclean’s regrets the error.