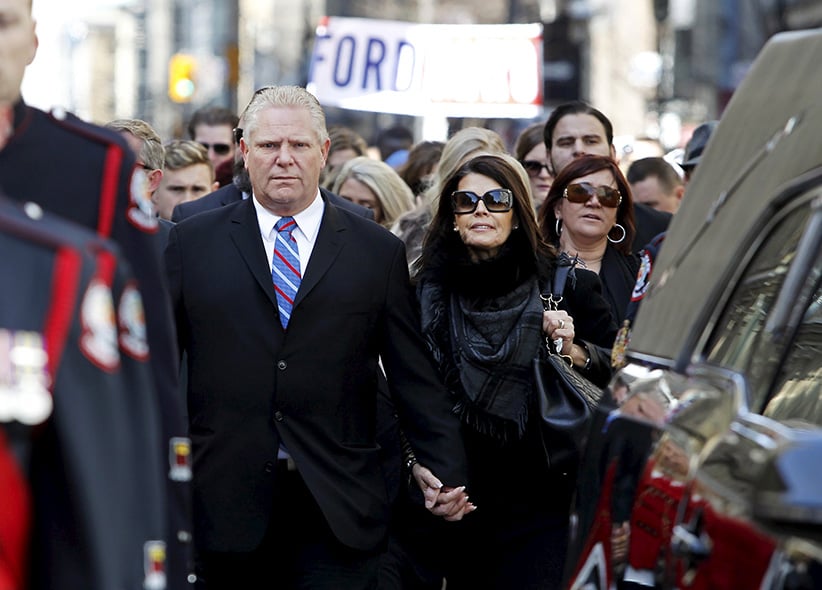 Organ music slurs through Toronto’s St. James Cathedral, and listeners drop their chins to their chests and close their eyes. Ford’s 11-year-old daughter, Stephanie, wears a black shawl and black hair elastic, while other family members wear black lipstick. Ford’s eight-year-old son, Dougie, is too big to sit on his mother’s lap, but not too big to lean on it.

The funeral offers a profound pause from Ford’s lifetime hullabaloo. When he died last week at 46, even his wake was controversial, as he was the first late Toronto mayor who died out of office to lie in repose in City Hall. In the lead-up to the funeral, 2,000 guests and public supporters slide into pews, including Ontario Premier Kathleen Wynne and Lieutenant Governor Elizabeth Dowdeswell—escorted to their seats by clergymen with silver staffs. As the procession enters, led by clergy titled “the most Reverend,” “the very Reverend,” and the “reverends,” invited guests scramble to turn off their cellphones, while the public pulls out their own to take photos. A videocamera on a boom roams over the Ford family’s bleached blond heads.

When the ceremony begins, the chaos finally calms. Stephanie speaks for Dougie and their mother, Renata. “I know my dad is in a better place now, and he’s the mayor of heaven,” she says. “Dougie and I know he will be with us forever.” Dougie is too short for the podium, and Renata only manages, “Thank you all for coming.” Rob’s brother, Doug, tells the wife and children, “You’ll always be taken care of.” He remembers Rob as “the mayor of Canada” and shares one story of his brother delivering subs for a local shop owner, Gus, while he was in office. “And he said the best thing of all, ‘They gave me $35 and I got a three-dollar tip.’ ”

More from macleans.ca: A transcript of eulogies at Rob Ford’s funeral

Amid the blackness, the ceremony still does justice to Rob’s charisma. “His blunt talk, no nonsense, get-it-done-now approach,” former premier Mike Harris says in a eulogy, “had inspired [people] to pick up the phone, to attend rallies, barbecues, and to vote, maybe for the very first time … what a breath of fresh air he was at City Hall.” A football player who Rob coached walks up to the pulpit from the back of the church, with a lanyard hanging out of his pocket, and recalls Rob’s loud spirit. “No one wanted to get that face red,” he says, but “he showed us right from wrong.” He kisses the casket on his way off the stage, and Renata leans out to give him a hug. A gospel singer performs Amazing Grace.

The audience members, who are Spanish, Chinese and Jamaican, dressed in cheetah print, turtlenecks and Velcro sneakers, are a microcosm of the entire city. One man wears Ford Nation flags sticking out of his black turban; a teenage couple cuddles each other, and a senior examines a program with a magnifying glass. “Rob was the champion of the teen,” says Doug in his eulogy. “He was the champion of the immigrant, the new Canadian, the union worker, the front-line worker and champion of the little guy.” The Fords are Catholic and conservative, while the church is Anglican and the majority of politicians in the front row are Liberal. “We’re all humans, no matter where we are in life,” says Rob’s family friend Robert Bielak, who owns a meat processing factory and worked with the Ford family labelling business. “We’re all the same. The ending is all the same.”

Friends say the ceremony suited Rob. “He would’ve loved every minute of it,” says Phil Luzzo, his trainer in rehabilitation in Muskoka, Ont. “I would do anything if I could wake Rob up for three seconds, hold him up over the street, and show him all these people. That’s what he worked for.” Another guest is Jenny James, a singer who wrote a ditty that became Ford’s campaign anthem (the chorus begins with, “Mayor Ford, the taxpayer’s lord”). Her two toddlers whine during Rob’s ceremony, but “he wouldn’t mind,” she says. “He truly understands.”

Nobody ignores the scandals throughout his life. Evelyn Cappelli, a senior who supported Rob, explains, “He was like olives: you either hate him or you love him,” and the funeral-goers are all love. “He was as honest as the day is long,” says his high school friend James Hajduk, who also recalls Rob inviting neighbouring high schools to parties. “That’s how we got to know all of Etobicoke,” says Hajduk, “through Rob Ford’s pool parties.”

Even Rev. Asbil acknowledges Rob’s blunders. “Very few of us know what it’s like to carry the burden of living your failings and your weaknesses in such a public way as Rob Ford,” he says. However, he adds that very few people know what it’s like to live with as much admiration as Rob did. “The Lord has called him to a celestial city, where the subways run on time,” he says. The church, built in 1833, is old for such a young man’s funeral. “We really shouldn’t be here,” says the reverend. “Not yet.”