A sober second thought on the 'eco-babble' about the mine-waste leak at Mount Polley, B.C. affecting what may be a record-breaking salmon run 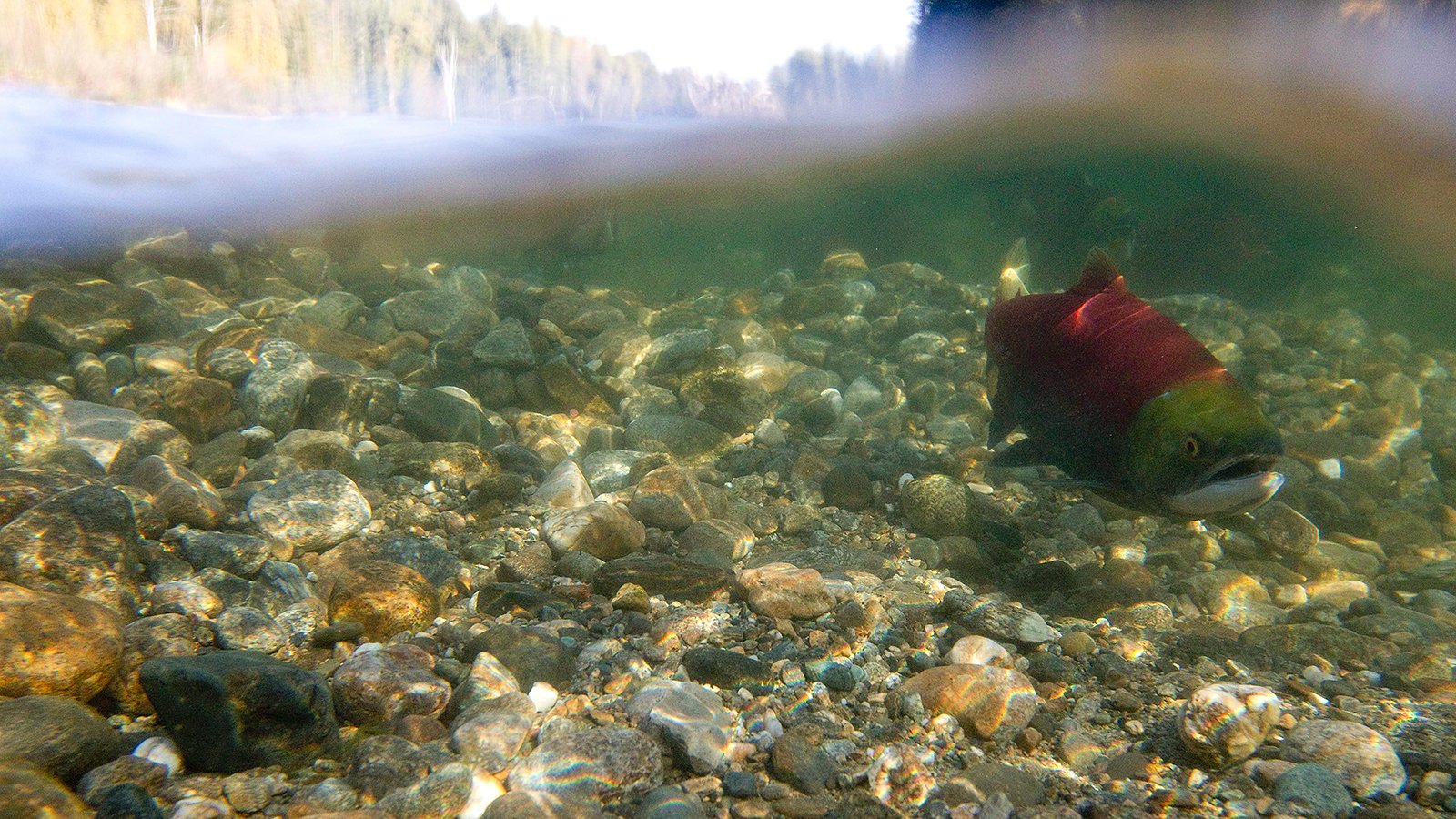 A spawning sockeye salmon is seen making its way up the Adams River in Roderick Haig-Brown Provincial Park near Chase, B.C. in 2010. (Jonathan Hayward/CP)

Update: New information about an interflow in Quesnel Lake has led Dr. Carl Walters to believe that the tailings pond breach does pose a risk to the sockeye salmon run. The below is the Q&A as it happened on Aug. 7.

When a tailings pond breached through the embankment at Mount Polley, near Likely, B.C. earlier this week, it leaked vast amount of mine waste, silt and fine particles into the local waterways. It didn’t take long for questions to come up: How would this affect the annual salmon run? Would the salmon be safe to eat? Those concerns were only compounded with the realization that the Department of Fisheries had predicted in March that this might be the largest salmon run in B.C. history, projecting that up to 72 million sockeye will return to the Fraser River and wind north through the province’s waterways.

So if there’s anyone who should be worried, it’s Carl Walters, an emeritus professor at the University of British Columbia’s Fisheries Centre who published his first paper on sockeye salmon in 1975 and has continued to study the fish in the four intervening decades. Walters has had, as he puts it, “a love affair with salmon” and says the run will not be affected by the spill. Walters explains why that’s the case, and why we need to beware of what he calls “eco-babble” in the wake of environmental disasters such as this.

Q: What will the impact of the tailings pond leak be on the salmon run?

It does not look likely that the Quesnel sockeye run, which until recently was one of the largest in the Fraser system, will be impacted by the spill.  The Quesnel Lake’s about 100 kilometres long, and the tailings came in near the outlet, the last 10 kilometres. The water turns over really quickly. In that area of the lake it will move out in about five days, so some of it should actually be reaching the Quesnel River by now. It won’t take long for it to get carried out of the system, and most of it will get carried out. As well, it’s being diluted into a large volume of Quesnel Lake surface water, by at least 99 per cent, and most of the contaminated water will move out of the lake into the Quesnel River. The toxicity of these chemicals is not well known, so we cannot be sure that there will be no effect, but it is hopeful that the dilution will be sufficient to save the fish.

Quesnel has historically been the second-largest salmon-producing area in Canada, the largest being Shuswap Lake near Kamloops. The Quesnel run–the main body of fish–will enter through the Fraser over the next two or three weeks down at the mouth, and then it’ll take them three weeks to get to Quesnel, and another week to get to Quesnel Lake, so it’ll be four to six weeks before large numbers of fish get up to the spawning areas around Quesnel Lake. We expect as many as one million fish to return to the major spawning streams that enter Quesnel Lake. And the water’s moving in from the big tributaries from the eastern part of the lake, and it’s moving west to flow out the Quesnel Lake, and it’s moving fast. So there’s going to be no material getting mixed up in the lake where the sockeye streams come in, or where the juvenile sockeye are rearing right now for the next generation.

Q: Of course, this is still bad news, right?

Oh, it’s still a bad thing, it’s a dangerous thing. And actually, there is an important salmon run that could be impacted—the chinook salmon are spawning in the Quesnel River down below Quesnel Lake. Those fish have already started to arrive in the Quesnel area, and they could definitely be affected by this stuff. It’s going to be fairly diluted where the spawning areas are, but there’s a risk.

But some of that tailing material, the sediment and stuff, will be flowing right over the top of the spawning areas for the chinook salmon. Fortunately, they spawn in big gravel–6-inch diameter gravel—and there’s a lot of flow through that kind of gravel environment, so not very much of that sediment will settle on their spawning areas. And all the coarser material will settle out by the Quesnel Lakes. The biggest risk for them is in the toxic chemicals. I saw that people from the mines have been doing these toxicity checks with rainbow trout by putting them in the tailings water before it was released. I heard that from the Imperial Metals people, so you have to take that with a grain of salt–but they have to do routine testings on the water quality, and you test them by putting trout in them and see if they die, and it didn’t seem to be all that toxic even before the breach. But getting those reports is really hard to do, because they’re from consultants.

Of course, there are only about 1,000 chinook salmon and there are going to be upwards of a million sockeye, so the chinook are really valuable. They’re big fish, and they’re important to the fishery here, so there’s certainly a conservation concern.

Q: What do you make of the significant concern being put out there in the media?

There’s been all manner of eco-babble in the news yesterday. I call it eco-babble because it’s just crazy assertions about destroying spawning areas. For some of the babble to be correct, some of the water would have to flow uphill. It’s still dangerous, but it’s going to be so dilute–especially by the time the sockeye get out there.

One more claim is about how this is going to disrupt the migration of the fish, that it’s going to make the water smell bad and they wouldn’t move up the river. It’s mostly organic compounds that they smell, not metals. And as I said, most of the water is going to be out of the system by the time they even need to sniff the Quesnel River here. Someone’s not thinking, here. Anytime anything happens, the eco-babble comes out, and mostly it sounds like science, and mostly it has no scientific basis.

Q: There’s also been these photos of dead fish, although the government has said it hasn’t found any.

When that stuff hit the lake, that was a very high concentration near the stream at Hazeltine Creek. The tailings will probably do considerable harm to Hazeltine Creek, but then they enter Quesnel Lake, where any material will likely settle in very deep water. And Hazeltine Creek has never been a significant producer of sockeye salmon. That was a lot of bad stuff that went in the lake, in particular a lot of silt. It’s not surprising it would kill some fish in the area. It’d be the whole stew of stuff hitting the lake. There was some fearsome stuff coming down there, no doubt about that.

Q: What do you make of the decision by the Department of Fisheries and Oceans to ban salmon fishing in the Cariboo and Quesnel Rivers because of the spill?

That’s just a precautionary thing, I think. Better safe than sorry. There are metals involved in this, and metals can get into the flesh of the fish, and things like lead and mercury can be really nasty when you eat them. It’s more precautionary than there being any direct evidence. I think by the time the fish get up to where the First Nations do most of their harvesting, things should be alright.

Q: Do you see there being any long-term impact from the tailings pond leak on the salmon run or other runs in the future?

My sense is that there won’t be any. Most of this stuff will be settled way down 600 metres into that lake or carried out of the system entirely within a month, actually. So unless they have another breach, it’s not really a big deal.