Saskatchewan is the most dangerous place to drive in Canada

Over a five-year period, Saskatchewan's average traffic fatality rate is more than double the national rate and higher than any other province

At the beginning of February, Saskatchewan Government Insurance held a press conference in a Saskatoon hotel ballroom to mark a statistical milestone: the number of people who died on the province’s roads last year was the lowest it’s been in more than 60 years. “Let’s make sure that 2017 was just the start of a real, lasting change that will result in many lives saved in the years to come,” said Joe Hargrave, the minister responsible for the provincial insurance company, according to the press release.

It was a milestone to celebrate for a province that has one of highest traffic fatality rates in the country.

Almost two months later to the day, a tractor-trailer collided with a bus carrying a team of young hockey players to their playoff game in the northeastern part of the province, leaving 15 dead and nearly as many injured.

The tragedy was not the first to take place at the quiet intersection in the rural part of the province. Two decades ago, six members of a British Columbia family died at the same location.

But the problem isn’t limited to that rural crossing. No matter which way you slice the statistics—by population, by licensed drivers or by kilometres driven—Saskatchewan has the highest road fatality rates of all the provinces, according to Transport Canada statistics.

Over a five-year period from 2011 to 2015 (the most recent year for which national statistics are available) Saskatchewan’s average traffic fatality rate was 13.2 people per 100,000 population – more than double the national rate.

In 2017, the record-breaking low year, 102 people died in traffic accidents on Saskatchewan roads. 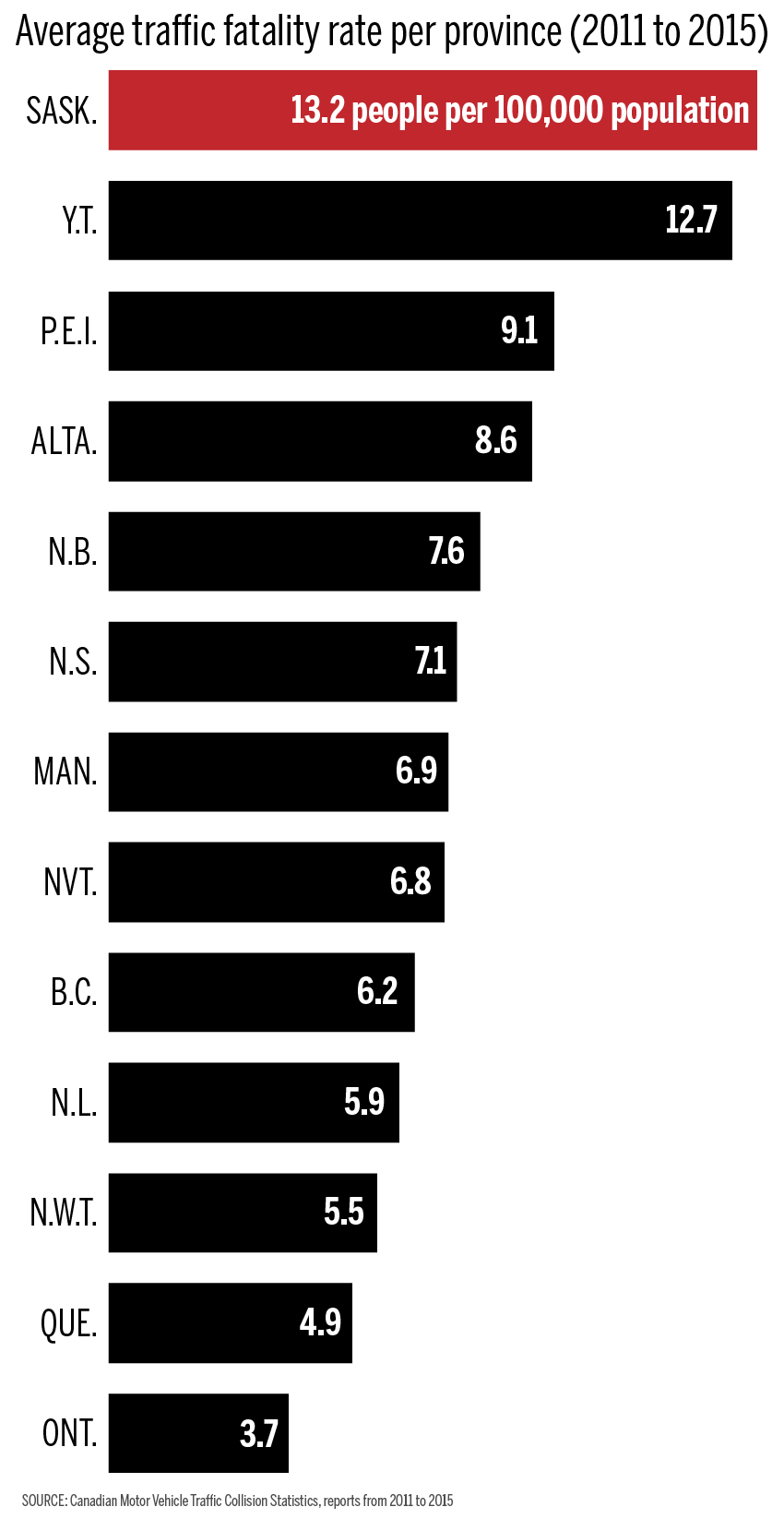 The high fatality rate isn’t a secret in the province. After fatalities spiked up to 183 people in 2012, the provincial government to put together a Special Committee on Traffic Safety. The final report, prepared for the committee and published in May 2013, claims the high fatality rate is due to several factors, including the structural issues that come with a sparsely populated province where people commute long-distances on high-speed roads.

It also outlined several legislative differences between the prairie province and its neighbours, including the use of photo radar, tougher drinking and driving laws and the number of traffic officers on the road.

Since then, the province has rolled out several initiatives to try and curb the numbers of deaths in traffic accidents. It put 60 dedicated traffic officers on the road, increased license suspensions and seizures for impaired and distracted drivers, harsher penalties for speeders and launched multiple awareness campaigns, to name a few.

Despite the attempts to change some of the social and bureaucratic structures that contribute to high fatalities rates, however, there are some issues will continue to be a reality for the province: human error, misfortune, and the long, straight roads that connect the rural pockets of the flat prairie province.