Serial killer Russell Williams could lose his military pension after all 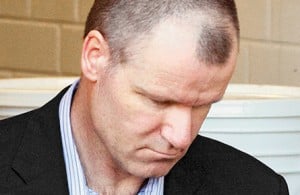 The Canadian Forces didn’t waste any time ridding itself of Russell Williams. As soon as the disgraced ex-colonel pleaded guilty, the military stripped him of all his medals, revoked his commission, and booted him from the air force on the grounds of “service misconduct”—the gravest breach possible. Military police even torched the killer’s uniforms. (The commander’s office at CFB Trenton didn’t need another overhaul; construction crews took care of that within days of his arrest, tearing up the carpet, painting the walls and delivering fresh furniture.)

But there was one thing the Forces couldn’t touch: Williams’s pension, believed to be worth $60,000 a year.

Despite his horrific crimes—and the anger of so many, in uniform and out—Williams’s retirement savings belong to him, by law. The Canadian Forces Superannuation Act, which governs military pensions, specifically states that such benefits are “exempt from attachment, seizure and execution,” which means they can’t be revoked by the government or awarded to plaintiffs. It doesn’t matter that the recipient is a sadistic serial predator who violated every core value the military stands for; he contributed to the pension plan for two decades, so the money is his.

One of Russell Williams’s victims is now fighting to change that law.

Laurie Massicotte—a Tweed, Ont., mother who was tied up and sexually assaulted just weeks before the intruder committed his first homicide—is attempting to amend a lawsuit she filed in 2011 to include a new claim: that the Canadian Forces Superannuation Act violates her Charter rights to life, liberty and security because it deprives her of potential compensation for the “physical and psychological losses” she endured. Simply put, she says the legislation that shields Williams’s military pension from lawsuits is unconstitutional.

Massicotte originally asked to add that argument to her claim late last year, but an Ontario judge denied the request in April, ruling it would only “complicate and lengthen” a case that is already more than two years old. Now her lawyer is asking the Court of Appeal for Ontario, the province’s highest, to overturn the decision—and put Williams’s pension back in play as potential damages. “To deny the amendments would be to prevent Laurie and her daughters [also named as plaintiffs] from fully asserting their claims as originally pleaded,” reads a factum from Philip Healey, Massicotte’s Toronto lawyer, filed in court on July 25. “The parties in this action have known about the issues in dispute since it was initiated.”

Although a ruling in Massicotte’s favour would not grant her (or any other victim) automatic access to Williams’s pension, the stakes are high. If the appeal court quashes the ruling and allows her to amend her lawsuit, it would—for the first time—put the former colonel’s pension in jeopardy. She would be allowed to argue the legislation protecting that money violates the Charter and must be struck down. “We believe that Ms. Massicotte should be entitled to full compensation for the losses and damages that she suffered,” Healey recently told Maclean’s. “And the pension should be part of that.”

A hearing date for the appeal has not been set.

What should happen to Williams’s pension has been a source of controversy since before he was even convicted. By chance, Stephen Harper’s Conservatives introduced new legislation in the days leading up to Williams’s sentencing hearing in October 2010, promising to strip federal prisoners of their old-age pensions and other guaranteed income supplements. But when questioned about the ex-colonel, the Prime Minister conceded that nothing could be done to reverse “contractual obligations the government may have,” including federal pensions.

In an email to all service members the day after Williams was sentenced, the chief of the Defence staff echoed that stance. “I wish to point out that under the CF Superannuation Act, there are no grounds to revoke his pension and a court martial would not have any impact on those accrued benefits,” wrote Gen. Walt Natynczyk, now retired.

The Forces’ pension regime is hardly unique. Most plans across Canada contain clauses that protect savings from creditors, says Lawrence Swartz, a Toronto lawyer and chair of the Canadian Bar Association’s National Pensions and Benefits Law Section. “The idea, from a public policy perspective, is that there is a social value in having a person’s pension payable to them,” he says. “The idea is to protect the basic financial security of Canadians into retirement, and that’s why the legislations protect against execution and seizure. If somebody were to sue they could collect from the person, but not from the pension fund.”

Swartz understands that in the eyes of most Canadians, the Williams case should warrant some kind of exception. “You’re talking about a case that is so notorious that it’s hard to not want to compensate the victims,” he says. “Your typical person would like to compensate these victims with anything they could.” But, he points out, where would the law draw the line?

Which criminals should lose their pensions, and which shouldn’t? “That’s not an easy question to answer,” Swartz says.

Any such change would require an Act of Parliament. Or a landmark court judgment—like the one Laurie Massicotte is pursuing.

It’s been more than four years since Williams, a once-decorated pilot and respected commander, confessed to a vile crime spree that shocked the country: two horrific murders, two home-invasion sexual assaults, and dozens of fetish break-ins targeting female underwear. His criminal proceedings were swift; just eight months after he buckled under police interrogation, Williams pleaded guilty to 88 charges and was sentenced to life in prison with no chance of parole for 25 years. The resulting civil actions, however, have unfolded much slower.

Now 51, Williams is the target of three multi-million-dollar lawsuits launched by various victims: “Jane Doe,” the first woman he sexually assaulted; the grieving family of Jessica Lloyd, who was abducted from her Belleville, Ont., home and later killed inside Williams’s Tweed cottage; and Massicotte, who was ambushed and assaulted inside her house just 12 days after Jane Doe. (The family of Cpl. Marie-France Comeau, brutally tortured and killed by her commanding officer, is not suing.)

Although Williams is the primary defendant, the three lawsuits also target his wife, Mary Elizabeth Harriman, a senior executive at the Heart & Stroke Foundation of Canada. They claim Harriman participated in a “fraudulent” post-arrest property transfer aimed at shielding Williams’s assets from the very kind of lawsuits he now faces. (She paid her husband $62,000 in cash and assumed the remaining mortgage on their $700,000 Ottawa townhouse, while he took sole possession of their lakefront cottage, originally purchased for $178,000.)

The victims claim the “secret” property swap was “clearly suspicious.” In responding court documents, Harriman denies the allegation, saying she had “absolutely no intention whatsoever” of shielding assets and that the “domestic contract” was signed to ensure her “financial security.” Harriman also says she was “devastated” to learn the truth about her husband’s depraved double life, and that she, too, is a “victim.”

From the beginning, Massicotte’s lawsuit has stood out from the other two. Most notably, she is the only plaintiff also suing the Ontario government for the alleged negligence of the provincial police. She claims the OPP should have warned her Tweed neighbourhood after “Jane Doe” was attacked in September 2009, but instead “placed the value of the criminal investigation above their duty to protect … by allowing women to be vulnerable to further sexual assaults.” (The province denies any wrongdoing, arguing in court filings that the OPP “acted at all times honestly, in good faith and in accordance with their public duties as police officers.” But an internal report, obtained by Maclean’s under Freedom of Information laws, reveals that the OPP did update its policies regarding public safety warnings after Williams’s arrest.)

Last December, Massicotte’s lawsuit took another major turn when she filed an amendment motion, requesting the court’s permission to make multiple additions to her original claim—including the new allegation that Harriman “was aware” of her husband’s “illicit conduct” but “did not report that conduct to the police.” (Harriman’s lawyers denied the explosive accusation, saying Massicotte has “provided no evidence whatsoever to support” such a “frivolous” and “vexatious” claim.) Massicotte’s other proposed change took direct aim at Williams’s pension: that Section 83 of the Canadian Forces Superannuation Act violates Section 7 of the Charter “and is therefore of no force or effect.”

Her motion to amend was the subject of a February court hearing in Kingston. Pamela Miehls, another of Massicotte’s lawyers, told Justice Martin James that all of Williams’s assets have been a live issue in the case and nobody “could be surprised that the plaintiffs would want to go after the pension as well.” To deny that opportunity, she argued, would prevent Massicotte and her daughters “from fully asserting their claims as originally pleaded.”

Pat Santini, Williams’s Ottawa lawyer, argued against the amendment, saying it is “premature and hypothetical” and “adds nothing to this proceeding.” Santini said the proper course of action is to first secure a judgment, attempt to collect from the pension plan—and if refused, then launch a constitutional challenge.

Justice James agreed. “The lawsuit is already more than two years old and has not progressed to examinations for discovery,” he wrote. “Documentary production is still incomplete. It is likely that permitting these amendments would compound the delay that has already occurred.” (As previously reported, that same ruling said the lawsuit should be allowed to explore Massicotte’s other key amendment: that Harriman knew about her partner’s crimes but kept quiet. “While the suggestion that Ms. Harriman was aware of Williams’s conduct may seem outrageous and far-fetched, the plaintiffs are entitled to endeavour to prove these allegations as a basis for an award of punitive damages,” the judge wrote. “The proposed amendments are relevant.”)

Williams is serving his life sentence at a penitentiary in Port-Cartier, Que., 1,200 km from his old office at CFB Trenton. If he lives to be 72, he will be eligible to apply for parole.
If Massicotte gets her way—and the appeal court rules in her favour—Williams’s military pension could be seized long before then.