Tom Lawson's comments prove sexism is 'wired' into our military

Anne Kingston on how Gen. Tom Lawson's Stone Age comments highlight the way sexism can become boiled into a culture 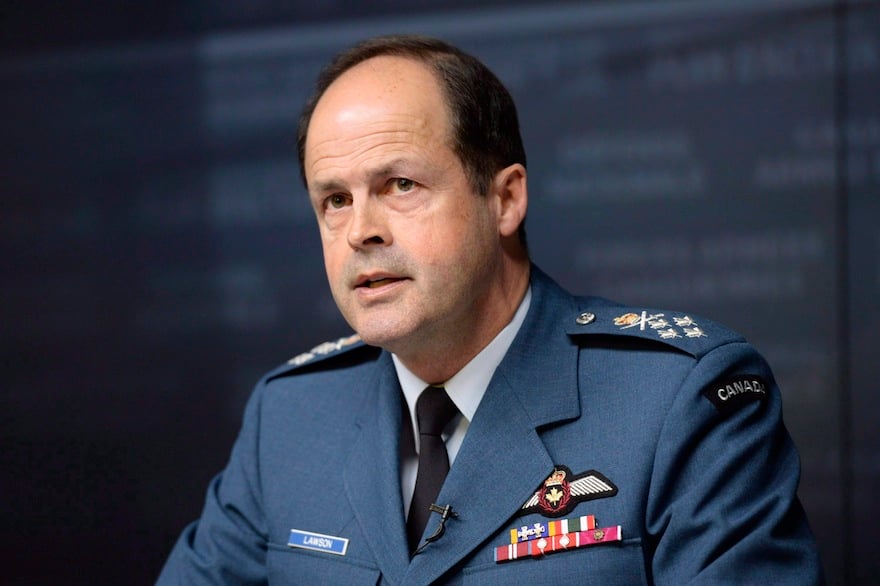 General Tom Lawson, Chief of the Defence Staff, speaks at a news conference in Ottawa on April 30, 2015. The country’s top soldier is facing questions this morning about how serious the Canadian Armed Forces are about tackling sexual harassment in the military. In an interview with the CBC that aired Tuesday, Gen. Tom Lawson, the chief of defence staff, said some male soldiers are “biologically wired in a certain way” to make them believe it is OK to force themselves upon female soldiers. THE CANADIAN PRESS/Adrian Wyld

In 2013, the Australian army posted a powerful  YouTube video of David Morrison, its chief of army lieutenant general, addressing its members amid an investigation into a group of officers posting “inappropriate material demeaning women” online. Morrison is direct and uncompromising. He tells the troops that sexual harassment or sexual assault stands “in direct contravention to every value the Australian army stands for,” and that there would be zero tolerance for it: “I will be ruthless in ridding the Australian army of people who cannot live up to its values, and I need every one of you to support me in achieving this,” he said.

Morrison’s comments, which immediately went viral, serve as a baseline for every civilized institution, one in which there is no black or white in the matter of sexual harassment. The army has to be “an inclusive organization in which every soldier—man and woman—can reach their full potential and is able to do so,” he said, adding that those “who think it’s okay to behave in a way that demeans or exploits their colleagues have no place.” His words were not minced: “If that does not suit you, then get out. You may find another employer where your attitude and behaviour is acceptable, but I doubt it. The same goes for those who think toughness is built on humiliating others . . . If you’re not up to it, find something else to do with your life. There is no place for you among this band of brothers and sisters.”

Morrison’s unequivocal stance stands in sharp contrast to the Stone Age comments made by Gen. Tom Lawson, chief of the defence staff of the Canadian Army, in a CBC interview yesterday. When asked about sexual harassment in the Canadian military, a situation described as “endemic” in a scathing April 2015 report by retired Supreme Court judge Madame Marie Deschamps, Lawson admitted sexual harassment was a “terrible issue,” before excusing it as biologically hard-wired: “It would be a trite answer, but it’s because we’re wired in a certain way, and there will be those who believe it is a reasonable thing to press themselves and their desires on others,” he told Peter Mansbridge, before throwing up his hands. “It’s not the way it should be.”

Lawson’s claim that men have an innate trigger that causes them to harass or abuse women (or, as he quaintly put it, “press themselves and their desires on others”) is bunkum, of course, the ultimate “boys will be boys” excuse commonly invoked to justify unacceptable, even illegal, behaviour. But it also offered rare insider insight into the way sexism itself is “wired” into military thought and structure, beginning with a focus on a double standard that can arise when evoking biological differences between men and women, which, of course, exist. It’s an attitude that covertly justifies the very humiliating, demeaning and, ultimately, institutionally demoralizing behaviour that David Morrison so eloquently condemned.

Lawson’s comments elicited predictable furor and calls for his resignation. The general, due to retire this summer, issued a backtracking statement that referred to his “awkward characterization” and said the Army would be addressing the problem with “an action plan based on the 10 recommendations provided in Madame [Marie] Deschamps’ report.” Exactly how that action plan will detonate hard-wired attitudes isn’t clear.

Examining the diametrically opposed attitudes expressed by David Morrison and Tom Lawson is instructive. It provides a reminder that every breath spent excusing or explaining away inexcusable behaviour, or soft-pedalling its damage, shrouds the issue in grey. And that takes us further away from confronting sexual harassment and assault in black-and-white, you’re-with-us-or-you’re-not terms. Morrison didn’t waste a moment explaining why sexual assault occurs in the Army. He treated it as a military strategist would: as an enemy of institutional values that needs to be eliminated. The battle can’t be won without widespread engagement, Morrison said: “The standard you walk past is the standard you accept.” They’re words to ponder, in light of the “trite answer” offered yesterday by Canada’s top soldier.