Small town Canada is dying. This is sad. But it's not tragic.

Scott Gilmore: The truth is that Canadians live healthier, happier and longer lives in cities 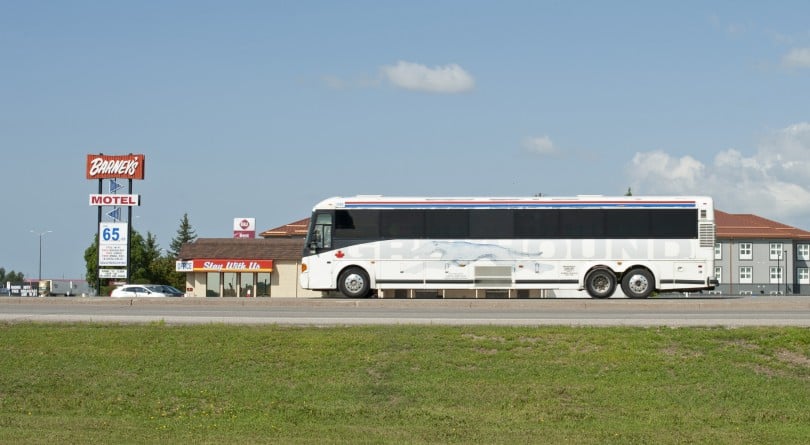 A decommissioned Greyhound bus being driven to Ontario from the west hits the highway in Brandon, Man. (Photograph by Mark Taylor)

In early July, Greyhound announced it will be ending all of its service in the Prairies. This doesn’t seem like something that would merit national attention, but it was an important topic of conversation at the premiers’ meeting in New Brunswick. Even Prime Minister Justin Trudeau addressed the issue, and he directed Transport Minister Marc Garneau to help ﬁnd a solution.

The reason for concern is obvious if you live in a small Prairie town or remote northern community in western Canada. There, many people rely on the bus to visit the hospital, go to college or just to see family.

In that light, it makes sense that our political leaders would want to ﬁnd a solution. Unfortunately, there is none.

Some palliative measures may be found. Ottawa and the provinces might give some tax breaks to Greyhound. Other companies might move in for a while. Perhaps a ride-sharing scheme will be tried. But these will all be temporary measures. None will stop the underlying social and economic changes that led Greyhound to its decision.

Around the time of Confederation, 84 per cent of Canadians lived in rural areas. The most recent data shows that only 18 per cent of us do now. And this exodus is being led by young people, making the average age of rural Canadians signiﬁcantly older than in the rest of the country.

We’re leaving these towns for the same reason most of our ancestors left their countries to come here: the hope of a better life. The modern Canadian economy is an urban one, driven by services, manufacturing, construction and ﬁnance. Less than 10 per cent of our GDP now comes from traditionally rural-based sectors such as mining and agriculture. We are not hewers of wood and drawers of water. We are baristas and barristers.

Canadians live healthier, happier and longer lives in cities. This is true for Indigenous people in Canada, too. Compared to their counterparts living on reserves or in remote communities, the children of Indigenous people living in cities are far more likely to graduate; suicide, infant mortality and homicide rates are lower; and life expectancy is longer in the city.

Whenever I point that out, I am accused of supporting the forced removal of Indigenous peoples off their traditional land. I do not. We all have a right to live where we want, but none of us can change the fundamental laws of economics. If your community can’t support jobs, your town will decay and eventually die.

This is sad. As I write this, I am in my own hometown in northern Manitoba. It has seen its population fall by half since I was born. Much of Main Street is boarded up or knocked down. When the mine eventually closes, the town may too. And news that Greyhound is pulling out is just a reminder of the mortality of towns.

In an ideal world, my hometown would thrive, as would all of our remote communities. We all want that. But in many places, nobody can make that happen, including all the premiers and the Prime Minister. And we never could. Eighty years ago, when the railroads began to close and towns began to die, promises were made in Ottawa and elsewhere that “solutions would be found.” They weren’t. Those towns are just names on old maps now.

But the communities did not die. The people just moved and spread out and brought with them their recipes for Saskatoon berry pie, their old curling trophies and their memories of small-town life—and then they shared these with new people in the cities.

Movement is the story of this country, and we’re still on the move. Every ﬁve years, more than four million Canadians relocate to a new community. Only a very small percentage of us die in the town where we were born. We are constantly in motion, and the country is continually evolving.

ALSO: Canada is one of the most socially mobile countries in the world. Here’s why.

Sometimes we wish this wasn’t true. We want to think that the Canada of our childhoods will endure. But it can’t. And our government can’t stop that. It could spend billions of dollars keeping bus lines running through communities like Fort Smith, NWT, and Falcon Lake, Man., but eventually, inevitably, those buses will be running empty.

The best we can do is to ease the transition as these towns fade, taking some comfort in knowing the people who leave will be joining new, bigger communities elsewhere.

Note from Scott Gilmore: I mistakenly wrote Fort St. John when I was thinking of Fort Smith. I apologize to the good people of Fort St. John (pop 20,155) who are doing quite well, and whose city was even named one of the best places to live in Canada by…this magazine.