As the popularity of snowmobiling grows, so does the tally of gruesome deaths and accidents 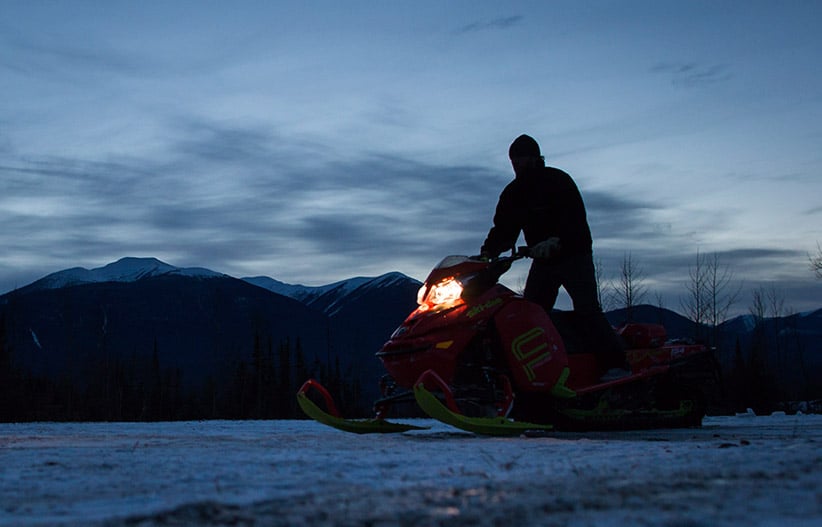 Clint Pelletier, of Edmonton, Alta., loads his snowmobile onto a trailer after snowmobiling near McBride, B.C., on Saturday January 30, 2016.  (DARRYL DYCK/CP)

If you’re a snowmobiler who wears a helmet, as is the law in Ontario, you should theoretically never have to visit Dr. Bruce Pynn.

And yet, the oral surgeon in Thunder Bay still sees between five to 10 patients each year with grisly facial injuries after flying over the handlebars of their snowmobiles—or right into them. “For facial fractures, it’s mostly just people who jump on without a helmet and then have a horrendous crash,” he says. That’s to say nothing of all those snowmobilers in the region who smash something other than their face.

Others aren’t so lucky. In Thunder Bay, and elsewhere, many riders fail to walk away from their mangled machines. In just the past week, five snowmobilers died in an avalanche near McBride, B.C., despite being part of a group rescuers described as “very prepared.” Meanwhile, in Ontario, two more snowmobilers perished in a collision in the province’s cottage country, a third drowned after falling through the ice and a fourth died after striking a snow mound and vaulting into the trees. Earlier in January, a 65-year-old Australian tourist died after he lost control of his sled while descending Whistler, B.C.’s Blackcomb Mountain during a guided New Year’s tour. Also that month, a father and his 14-year-old son collided head-on near their cabin in eastern Manitoba. Both died at the scene.

It’s not as though 2016 is a particularly deadly year, either. As many as 50 people die in snowmobile accidents annually in Ontario and Quebec alone. Another 1,200 or so Canadians are treated in hospitals with snowmobile-related injuries, according to the most recent data from the Canadian Institute for Health Information. Moreover, snowmobile injuries tend to be more severe than those suffered by participants in other winter sports like skiing, snowboarding or hockey, which makes sense given snowmobiles are 250 kg off-road machines capable of speeds in excess of 100 km/h.

While Canadians are regularly plunged into fits of introspection following a particularly violent hockey hit, the country routinely delivers a collective shrug when faced with year after year of deaths and injuries involving our other national pastime—snowmobiles. “The more familiar you are with an activity, the less risk you see in it,” says Pamela Fuselli, a vice-president and spokesperson for Parachute, a charity that focuses on injury prevention. The group is particularly concerned about children, given that four kids under the age of 16 die annually in snowmobile accidents. Nor is it only a question of safety. Reckless riders have become the bane of some communities, while environmentalists are concerned about the impact on Canada’s pristine wilderness and wildlife. Still others complain about having to share trails with noisy motorized sleds.

Add it all up and the conclusion seems inescapable: Snowmobiles are as Canadian as hockey or moose, but, left unchecked, they’re also at risk of becoming a wintertime menace. 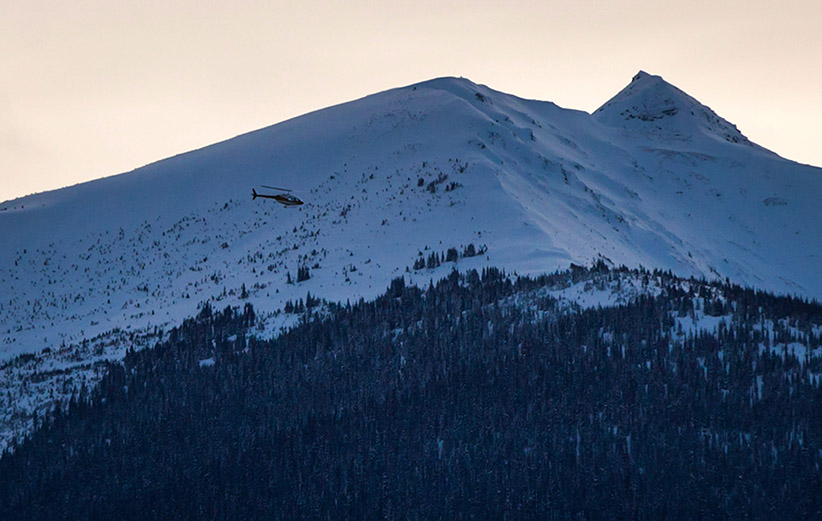 A helicopter flies past a snow-capped mountain top near McBride, B.C., on Saturday January 30, 2016.(DARRYL DYCK/CP)

The Canadian version of the snowmobile, or Ski-Doo, was invented in 1922 in Valcourt, Que., by Joseph-Armand Bombardier, who strapped a Model T engine to a pair of wooden sleighs. The contraption was driven by a huge, whirling rear propeller—a design so obviously dangerous that Bombardier’s father apparently ordered his son to immediately dismantle his creation.

Nearly a century later, there are more than 600,000 legally registered snowmobiles in Canada and the sport’s popularity appears to be growing. Canadians bought more than one-third of the 151,000 snowmobiles sold worldwide last year, according to statistics kept by the International Snowmobile Manufacturers Association. Meantime, there are hundreds of snowmobile clubs across the country that build and maintain some 112,000 km of trails, produce annual financial reports and carry liability insurance. Many have also received considerable government support—one longtime observer of political support for the sport, Sun Media’s David Akin, has noted that in 2012 alone, Quebec-based snowmobile clubs received nearly $1 million* in grants from the former Conservative federal government in the span of just a few weeks. Much of that money went toward buying state-of-the-art grooming machines, costing as much as $240,000 a piece. “It’s not the mom-and-pop show it used to be years ago,” says Dennis Burns, the executive director of the Canadian Council of Snowmobile Organizations.

Yet for all the investments in infrastructure, the sport retains its original whiff of danger. Every year the onset of snowmobile season is accompanied by reports of riders who crash into trees, rocks or fences, or fall through ice on streams, rivers and lakes (statistically speaking, there are several factors that make a snowmobile injury more likely: riding off a trail, driving too fast, riding at night, drinking alcohol and not wearing a helmet). Not only do all those preventable deaths and injuries cause much anguish and heartache for friends and family, they also carry a very real cost for society. Officials in Sudbury, Ont., recently told the CBC a typical snowmobile rescue costs taxpayers upward of $1,000, depending on the situation, and involves as many as 10 firefighters and several pieces of equipment. Rescues that take place in the mountains, meanwhile, are even more expensive, since they require the scrambling of helicopters and their crews, as was the case in mid-January when four snowmobilers from Alberta got lost near Golden, B.C.

Canada’s complex relationship with the snowmobile is illustrated by recent events in Gander, N.L. Snowmobiling is popular in the town of 11,000 people, given its proximity to a network of trails and its reputation as Canada’s snowiest community, with an average annual snowfall of 443 cm. But many locals are irate after a group of unscrupulous riders tore up the local golf course, damaging 12 of 18 greens and tee boxes. “There are three or four greens with big slice marks in them from the snowmobiles’ carbide runners,” says Bert Peddle, the golf course’s president, an avid snowmobiler himself. In Nova Scotia, meanwhile, a snowmobile and “side-by-side” all-terrain vehicle recently wreaked similar havoc on the Digby Pines golf course. In Hearst, Ont., an airplane pilot was forced to abort a landing last week because snowmobiles were on the runway. And a week earlier, police in St. John’s arrested a man who was brazenly riding his snowmobile on a downtown street. At times, it seems like the entire country has gone snowmobile-crazy.

Even those who keep their sledding outside city limits are being decried as disruptive. Ontario’s Woodland Caribou Provincial Park has been phasing out snowmobiles over the past decade because of concerns the packed trails they form make it easier for wolves and other predators to prey on endangered caribou. In Alberta, conservationists are calling for a ban on off-road vehicles, including snowmobiles, in parks on the eastern slopes of the Rocky Mountains because of their impact on headwaters and wildlife. In B.C., the Valhalla Wilderness Society wants a crackdown on snowmobiles in the province’s Interior because it says their whining engines are pushing endangered mountain caribou into areas where they are more vulnerable. “The difference is in how snowmobiles are used these days and their sheer numbers,” says Craig Pettitt, 68, a Valhalla director, referring to the growing popularity of powder-capable alpine machines. “I’m seeing them on backcountry I wouldn’t even ski on.”

There’s even a debate about snowmobile use in Whitehorse, of all places. Keith Lay, the president of the Active Trails Whitehorse Association, says his group is protesting local bylaws that allow snowmobiles access to trails that are otherwise off-limits to ATVs and other motorized vehicles. “There is a debatable belief among those in power that snowmobiles have a negligible impact on both the environment and on other users,” Lay says.

Burns, the national snowmobile council head (and a longtime enthusiast himself), is among those who believe snowmobiles have a light touch. Moreover, he argues it’s unfair to single out snowmobiles when it comes to safety since all winter sports carry inherent risks. “Snowmobiling in Canada is as big as recreational fishing,” says Burns, citing estimates the industry adds $8 billion annually to the Canadian economy. “And if you live in Mary’s Harbour in Labrador, having a snowmobile isn’t merely an option—it’s your only winter transportation. It’s a way of life.”

Maybe so, but for so many others it’s a fatal thrill ride.

CORRECTION, 4 Feb 2016: An earlier version of this story incorrectly cited the amount of federal money given to Quebec snowmobile clubs during a two-week period in 2012, as reported by Sun Media’s David Akin. We regret the error.