So, Nathalie Normandeau, about that apology...

Quebec's former deputy premier attacked Maclean's for its coverage of corruption in Quebec. She is one of seven now facing fraud charges. 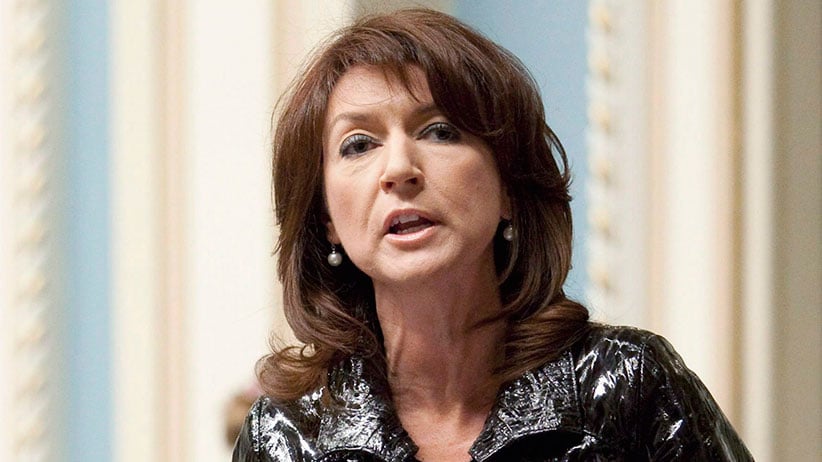 On Thursday morning, agents from UPAC, the province’s anti-corruption squad, arrested Normandeau on charges of (deep breath) conspiracy, bribery of a public servant, fraud against the government and abuse of trust. Also charged was a former provincial Liberal cabinet minister; Normandeau’s former chief of staff, Bruno Lortie; two former executives with Roche, an engineering firm; as well as two political aides with the Parti Québécois, one of whom worked for ex-PQ leader Pauline Marois.

Tellingly enough, Normandeau’s many appearances in the report outline the scheme through which the Quebec Liberal Party became flush, and a select few of the province’s engineering firms got the lion’s share of government contracts. A sample:

-Normandeau attends a Liberal party fundraiser, organized by contractor Lino Zambito. Also in attendance: executives from the biggest engineering firms in the province, who donate heartily (and illegally, more on this in a second) in order to, according to testimony by former Normandeau press attaché Michel Binette, “gain access to cabinet,” “advance their projects” and “gain influence over government decisions.”

-Normandeau testifies that the unwritten rule among Quebec Liberals was that each minister had to raise $100,000 a year. She goes over and above, raising a total a total $747,318 between 2005 and 2009. Normandeau’s chief of staff, Bruno Lortie, actively solicits funds from said engineering firms—causing, in the words of the commission report, “serious conflict of interest questions.”

-Zambito, who owns construction company Infrabec, donates a total of $126,000 to the Quebec Liberal Party, mostly through Normandeau and Lortie. He also gives Normandeau nine tickets to a Céline Dion show, two tickets to see Madonna, and 40 roses in celebration of Normandeau’s 40th birthday. Normandeau responds with the mother of all mash notes. The gesture “greatly touched me,” Normandeau writes. Zambito later testified that everything, roses included, was done in the name of “business development” for Infrabec.

-Infrabec scores a $28-million contract for a water purification plant in Boisbriand, a Montreal suburb.

Preferential treatment, pay-to-play ploys, fundraising quotas, business development disguised as cheap sentimentality: it’s all here, under Normandeau’s name. It is therefore difficult to overstate the significance of her arrest. Up until now, UPAC has only netted a handful of engineers, lowly civil servants and party bagmen, mostly at the municipal level. The commission report itself landed with a thud and indifferent reaction from the current Liberal government. Former Quebec premier Jean Charest, whose government (reluctantly enough) created both UPAC and the commission, has so far remained unburdened by its investigations.

But Normandeau is different. An articulate hyperpartisan, she was a rising star in the Quebec Liberal Party. She was the linchpin of Jean Charest’s infrastructure and energy policies. As deputy premier, she became one of his closest confidants—so much so that, according to former Liberal MNA Marc-Yvan Côté, it was Charest’s office that recommended Lortie be Normandeau’s chief of staff. (Coté couldn’t be reached for comment. He, too, was arrested in the UPAC sweep Thursday morning.)

It remains unclear why Normandeau was arrested this week, though UPAC investigations head André Boulanger intimated that it had to do with contracts awarded to Roche, an engineering firm, when Normandeau was minister. The company, Boulanger said at a press conference shortly after Normandeau’s arrest, “donated to political parties, and there was necessarily a return on investment throughout the years that ensured [the company’s] financial health.”

Interestingly, it was during the formative years of Charest’s government the Quebec Liberal Party became a money harvesting machine, thanks in large part to what are known in these parts as “straw man donations.” Corporate political donations are illegal in Quebec; Roche, like any other company, cannot give money to a political party. In order to get around this pesky state of affairs, businesses would often strongly urge their employees to make the donations in their own name, with a promise of reimbursement.

The scheme was designed by Parti Québécois bagmen, so as to circumvent the party’s own political financing law, which the René Lévesque government instituted in 1977. Both PQ and the Liberal governments availed themselves of it, though under Charest (and, especially, Normandeau) the Liberals became ferociously adept at employing it.

Between 1998 and 2010, according to an industry report, the executives and employees of Quebec’s 10 biggest engineering firms donated $13.5 million to political parties in the province—60 per cent of it to the Liberals, 36 per cent to the PQ, and four per cent to the ADQ, a defunct conservative party. In the hyperpartisan realm of Quebec politics, circumventing electoral law has been a decidedly non-partisan affair. (Two PQ politicos, including a former attaché of former premier Pauline Marois, were also arrested Thursday.)

But back to Normandeau. Under Charest, she was also the Liberal’s designated attack dog. In 2010, this magazine published a cover story outlining Quebec’s myriad issues concerning corruption. The piece, entitled “Quebec: The most corrupt province,” was aimed squarely at the province’s political class. Its political class was suitably piqued. Charest sent the magazine an angry letter, while federal MPs in Canada’s Parliament voted in favour of a motion expressing the House’s “profound sadness” in the article and accompanying cover image.

Normandeau was particularly theatrical. “Maclean’s should apologize to all the people of Quebec… Maclean’s is attacking our institutions, our history, our symbols,” Normandeau said during a press conference, at which she brandished a copy of the magazine. (She paid for it, presumably.)

About a week later, Normandeau and I appeared on Tout Le Monde En Parle, a weekly talk show. In front of a televised audience of more than one million people, she asked for an apology from Maclean’s once again.

I’ll take this opportunity to do the same from her.