Sorry Beijing, the SNC-Lavalin affair is not your ace card in the Meng case

Terry Glavin: Canada's rule-of-law system held up, even as Trudeau abused it for the sake of SNC. Now Ottawa must defend it against pressure from Beijing. 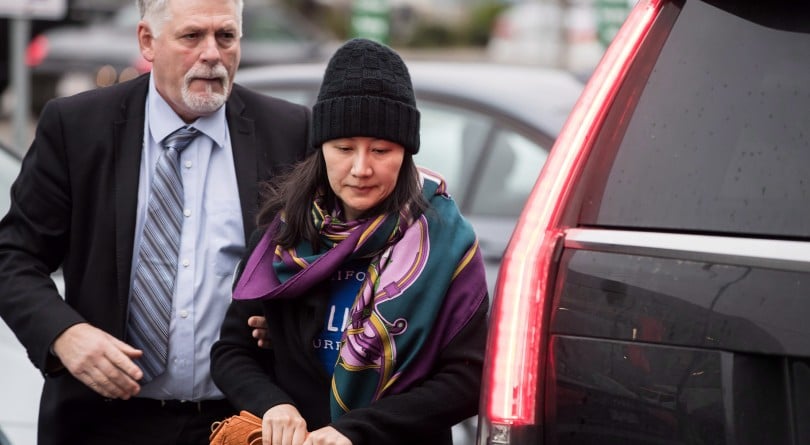 Meng Wanzhou, right, with a member of her private security detail in Vancouver. (Darryl Dyck/CP)

On Friday, Justice Canada announced that an “Authority to Proceed” had been issued to begin formal extradition proceedings in the explosive case of Huawei Chief Financial Officer Meng Wanzhou, who is facing charges in the United States on several counts of defrauding banks in violation of U.S. sanctions on Iran.

Almost simultaneously, in Beijing, Chinese foreign ministry spokesman Lu Kang said Prime Minister Justin Trudeau should be obliged to answer to the charge that he is a hypocrite for failing to intervene on behalf of Huawei, the Chinese telecommunications behemoth, while at the same time apparently attempting to interfere in criminal proceedings against the Quebec engineering giant SNC-Lavalin.

“Of course I think that this is a question that should be asked of the Canadian government,” Lu said. In fact, as a wisecracking rhetorical question it’s been making the rounds in Canada for a while. But coming from Lu Kang, of all people, the question is too clever by half. In the current China-Canada-estrangement, sparked by Meng’s arrest in Vancouver last December, it sure isn’t Canada that has any explaining to do.

RELATED: It’s time for Justin Trudeau to put his cards on the table

It’s fair to say that the whole SNC-Lavalin affair has been an international embarrassment for Canada. It has shone a harsh spotlight on the lengths to which Justin Trudeau and his palace guard were prepared to go to safeguard a favoured Canadian company infamous for its culture of payoffs, kickbacks and bribery, its wildly lucrative relationship with the criminal regime of the late Libyan mass-murderer Muammar Gadaffi, and its palm-greasing intimacies, legal and otherwise, with Trudeau’s Liberal Party. It has become what is known in liberal democracies as a scandal.

To imagine a similarly corrective uproar unfolding in Beijing, you’d have to picture an alternative universe in which one of President Xi Jinping’s many untouchable military-industrial sweatshop complexes is subjected to the impudence of an otherwise wholly unimaginable public corruption prosecution. And President Xi can’t seem to make the charges go away. And then Xi and several of his Central Committee subordinates are somehow publicly exposed in their strong-arming and bullying by a vibrant, free press that appears magically, right out of the blue. And then, owing to the exhaustively reported details, and the live broadcast of eye-witness testimonies, and Xi’s daily grilling in front of the cameras, there is such widespread public revulsion that the whole thing threatens to bring down the ruling Chinese Communist Party.

This is of course inconceivable.

Beijing’s suggestion that we should compare Meng Wanzhou’s treatment with SNC-Lavalin’s is of a piece with the brazen contempt for the intelligence of ordinary Canadians on display in January when Lu Shaye, China’s ambassador to Canada, floated what is arguably the stupidest propaganda line in the dispute so far. In retaliation for merely detaining Meng on a U.S Justice Department’s extradition request, Beijing’s security and intelligence apparatus kidnapped two Canadians—diplomat-on-leave Michael Kovrig and cultural entrepreneur Michael Spavor. Ambassador Lu described Canada’s impudence in calling for their release an instance of “white supremacy.”

Kovrig and Spavor are languishing in a secret prison somewhere. A third Canadian, Robert Lloyd Schellenberg, has been re-convicted on drug charges in order to produce a death sentence. Meng Wanzhou has been out on bail since December, living in one of the mansions her family owns in Vancouver, enjoying limousine escorts to wherever she would like to shop or similarly entertain herself, anywhere in Metro Vancouver.

The immediate objective of China’s fist-shaking and its threats of more reprisals to come was to cause enough of a panic in Ottawa that Attorney General and Justice Minister Jody Wilson-Raybould would simply issue an order for Meng to be released. It didn’t work. Wilson-Raybould’s testimony at the Justice Committee this past week demonstrated quite plainly that she is not easily bullied. She stood her ground. Meng Wanzhou was not released.

Throughout, Trudeau took pains to persuade everyone that that he wasn’t going to be pushed around by China, either. Canada was all about the “rule of law,” and that was that. To prove the point, Trudeau went so far as to fire the openly and happily capitulationist John McCallum, the cabinet minister and Liberal Party grandee he’d appointed ambassador to China two years earlier.

On the very day the Globe and Mail reported the first sensational allegations that the Prime Minister’s Office had been improperly badgering Wilson-Reybould to intervene in the criminal fraud and bribery charges facing SNC-Lavalin, Trudeau was asked whether the Chinese should continue to take him seriously. “We have been consistent that Canada is a country of the rule of law that respects the independence of the judiciary,” Trudeau said, “and always will.”

It’s not easy to make the case that U.S. President Donald Trump has been pulling the strings when there is no evidence that he even knew about the New York District Attorney’s Office extradition request. But that hasn’t stopped Beijing from traducing Canada as Trump’s lickspittle. In any case, if Trump were to somehow intervene to get the U.S. Justice Department’s charges against Meng dropped if it served some trade-talks stratagem—a move Trump has stupidly speculated he might consider—that would not be Canada’s doing.

So far, Canada’s adherence to legal norms in the case has been beyond reproach, and Beijing was left with even less of a leg to stand on in its insinuations on Friday when the way was cleared for Meng’s extradition hearings. It turns out Canada doesn’t cave in so easily after all. And so far, for all the banner headlines and live-feed bombshell revelations, all the evidence in the SNC-Lavalin affair has weighed thoroughly against the proposition that Canada’s justice system is so malleable as to be easily subverted, either to Donald Trump’s venal trade purposes, or to Xi Jinping’s global-hegemony purposes, or to the benefit of Huawei, or to the benefit of SNC-Lavalin.

It’s good sport to have a laugh at Trudeau’s expense now that his own devotion to the rule of law and judicial independence has been revealed as perhaps quite a bit less fervent than he has been serially and loudly proclaiming these past few weeks. After Wilson-Raybould’s Justice Committee testimony last week, there sure isn’t much cause to just take the Trudeau government at its word in these things anymore. It’s now all but certain that Wilson-Raybould was forced to forfeit the attorney general’s portfolio for refusing to acquiesce to the Prime Minister’s Office and its forceful entreaties.

The point is, there has been no direct intervention in SNC-Lavalin’s criminal prosecution. The AG’s office did not instruct the public prosecutor to suspend the criminal charges and proceed instead by way of the court-supervised remediation agreement that SNC-Lavalin had been wanting all along. The case is proceeding, despite Trudeau’s persistent complaints.

The SNC-Lavalin story is far from over, but so is the saga of Huawei’s Meng Wanzhou. There will be more Justice Committee witnesses in the SNC-Lavalin saga, and for whatever little use it’s likely to serve, there will be an ethics commissioner investigation. Meng Wanzhou’s case opens this coming Wednesday for formalities and the scheduling of hearings. The extradition proceedings could take months. Maybe years.

Just how the SNC-Lavalin scandal will resolve itself is anybody’s guess, but the Trudeau government is horribly tainted. It has left the impression that it harbours an aversion to fair and open-dealing, and that behind the scenes it’s unreliable in its avowed determination to withstand creepy corporate favour-currying.

But the case of Meng Wanzhou provides the Trudeau government with an opportunity to redeem itself. So does the decision Canada must soon make, in light of the “Five Eyes” western intelligence agencies’ consensus that Huawei poses a national security threat, about whether to permit Huawei’s further entrenchment in 5G technologies development in Canada.

In the immediate term, Meng’s extradition case provides David Lametti, Wilson-Raybould’s replacement as attorney general, with an opportunity to prove he’s not just a compliant, errand-running stooge. Lametti should stay away from the case altogether and let justice department lawyers do their jobs.

RELATED: Is America ‘unhinged’, or does its case against Meng Wanzhou have merit?

Extradition cases are not like criminal prosecutions. Eventually, if the courts clear the way for Meng’s extradition, the justice minister—for now, that’s also Lametti—must make the call. The courts expect justice ministers to make these decisions in limited consultation with their cabinet colleagues.

The hard part is going to come when the federal cabinet has to decide either to carry on with the Communications Security Establishment’s trust-us assurances that it has the means to adequately monitor Huawei’s behaviour, or to pay closer attention to intelligence analyses that cast Huawei as effectively an arm of the regime in Beijing. Until now, the Trudeau government, and its Liberal predecessors, have been happy to outsource difficult decisions like these to the Canada-China business lobby. Those days are over. Or at least they better be.

If the Liberals want voters to believe that they will always puts the public interest first, above all else, and that they will defend deeply entrenched democratic values like the rule of law no matter how much that defence might inconvenience their friends, then they’re going to have to prove it.

For Trudeau to just stand there with a phalanx of MPs like a lineup of mannequins behind him, repeating hackneyed claims about how Canada is “a rule of law country” as though he were some human algorithm, just won’t do. Not anymore.