Standing against a B.C. pipeline from three provinces away

Image of the Week: Supporters of Wet'suwet'en hereditary chiefs fighting Coastal GasLink are hitting the streets of their own communities 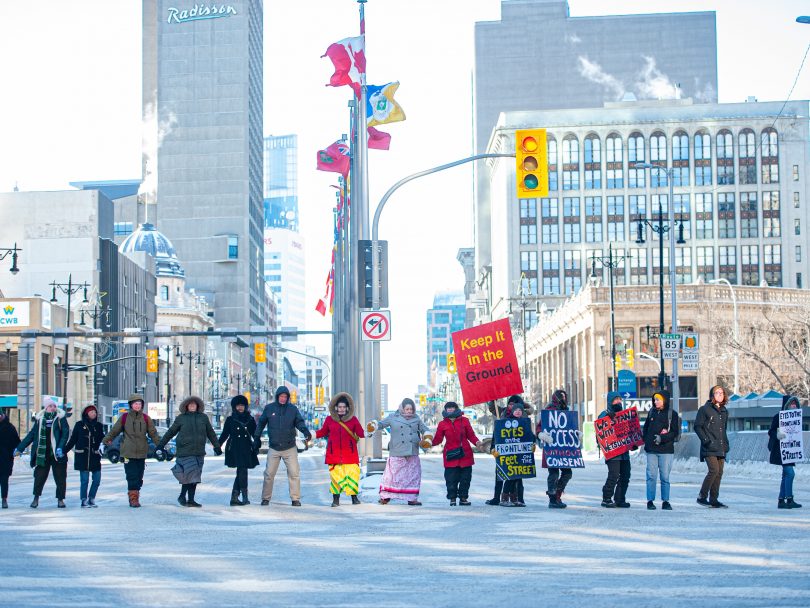 Wet’suwet’en hereditary chiefs and their followers are not backing down for anyone: not TC Energy, the company struggling to build a $6.6-billion gas pipeline through Wet’suwet’en territory; not B.C. Premier John Horgan, who announced on Monday “the courts have confirmed that this project can proceed, and it will proceed”; and certainly not Justin Trudeau, who has heralded the total $40-billion LNG Canada terminal the pipeline would serve as an environmentally conscious alternative to Chinese coal exports. Blocking the entire operation are a handful of hereditary chiefs who oppose the pipeline running through their unceded land, and who have spent years setting up blockades to prevent construction of the 670-km conduit, which, they say, would irreparably damage their heritage, buried artifacts and environment. The stance has put them at odds not only with the Horgan government, but with elected leaders of the Wet’suwet’en who signed agreements allowing the project to go ahead. Still, this past week, supporters congregated across Canada to show solidarity with the anti-pipeline chiefs, including in Winnipeg, pictured above, where more than 100 people performed a traditional dance at the corner of the iconic intersection of Portage and Main. “Canada has only been around for so long,” one supporter told CBC News. “The history these people are standing for, and we are standing with them, goes a long way back, and that is what is needed to be understood.”