The sacrament of penitence isn't easy at the best of times, but priests across the country are finding ways to provide it 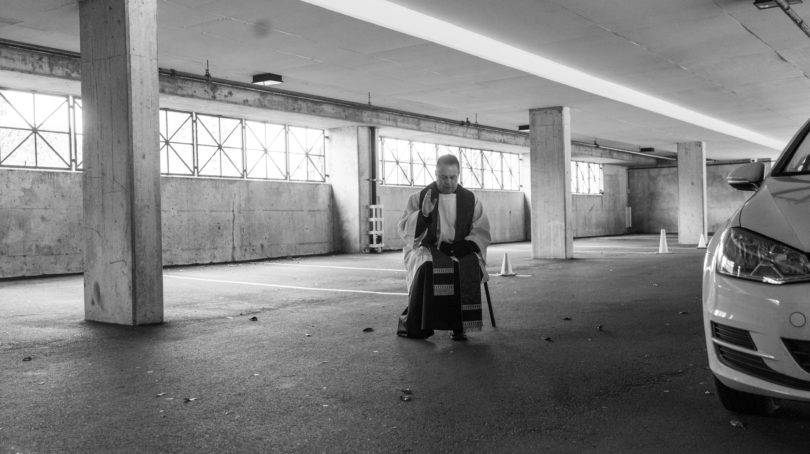 “There’s a flow. Much like, if you can sadly imagine, a McDonald’s drive-through,” explains Rev. James Hughes, a priest at St. Patrick’s Roman Catholic Parish.

Dressed in his priestly robes, Hughes sits in a burgundy chair between the yellow lines of a parking spot as parishioners drive up, past a printed-out sign that says “Drive-thru Confession Line-up,” to a designated area two metres away. The car parks. The window rolls down. The driver confesses.

RELATED: Quarantine nation: Inside the lockdown that will change Canada forever

In another section of the garage-style parking lot, another priest, Rev. Felix Min, takes walk-in confessions behind a frosted glass screen that’s installed on a plastic folding table. The faithful are asked to stand, rather than sit or kneel, which Hughes admits is a little unorthodox. (“We didn’t want to have to sanitize after every penitence.”)

Really, this is all pretty unorthodox, although St. Patrick’s priests are confident the asphalt venue doesn’t trivialize the concept of confessing your sins in the first place.

As society adapts to extraordinary restrictions to contain the spread of COVID-19, communities of faith are thinking outside the box. In addition to offering the sacrament of confession during several windows of time before Easter—and possibly on an ongoing basis thereafter, although that decision hasn’t yet been made—St. Patrick’s is also streaming its regular services online, a decision matched by places of worship across the country.

“We have to be a little bit creative, and at the same time respect the regulations regarding social distancing, and be very aware, and not put people in compromising situations,” says Hughes. That includes, for security’s sake, nixing any thought of taking confession by phone or through social media. There’s too much of a paper trail.

Rev. Felix Min takes a confession from behind a partition. (Jimmy Jeong)

“It’s a huge challenge,” he says about performing his duties these days. “I’m sorrowful, but I’m not sad. I make that distinction in language. I’m sorrowful because of the emotions of being disconnected with my people, and not being able to give them what I think they deserve,” Hughes says. “But I’m not sad. Because sadness really speaks of a lack of hope.”

For Canada’s some 12.8 million Catholics, he says, the hopeful message of Easter—that Christ experienced human suffering, died and rose again so that his followers might be saved—is particularly resonant now. “Hearing this message in light of COVID-19 I think has a greater depth than the times of normalcy that we have often enjoyed, and the conveniences that we’ve often enjoyed with life. Having a deprivation like this has helped us appreciate the sacraments and church life.”

According to the priest, parishioners have largely taken the idea of a dashboard confessional in stride—they are glad to have the option—but he recognizes change can be hard for some.

On Prince Edward Island, where an enterprising priest began parking-lot confessionals in mid-March, one parishioner told the Journal Pioneer of Summerside she was “having problems wrapping my head around a drive-through confession.” In the back parking lot of St. Anthony’s Church in Woodstock, P.E.I., the drive-through window, so to speak, was on the driver’s side of Rev. Danny Wilson’s own white sedan.

In Belleville, Ont., the priest at St. Michael the Archangel Church has been taking drive-thru confessions from an open rectory window. “We have been very inventive,” Rev. Richard Whalen told CTV.

During turbulent times in history, he mused, the church has always found ways to offer sacraments to people who, despite all obstacles, are eager to hold tight to their traditions, their faith and their humanity. Priests have gone onto battlefields. Into prisons. Into hospitals.

Parking lots aren’t so bleak an addition to that list.