A decade after Stevan Ellis tried to solicit sex in exchange for allowing a woman to stay in Canada, the former judge's legal saga is finally over 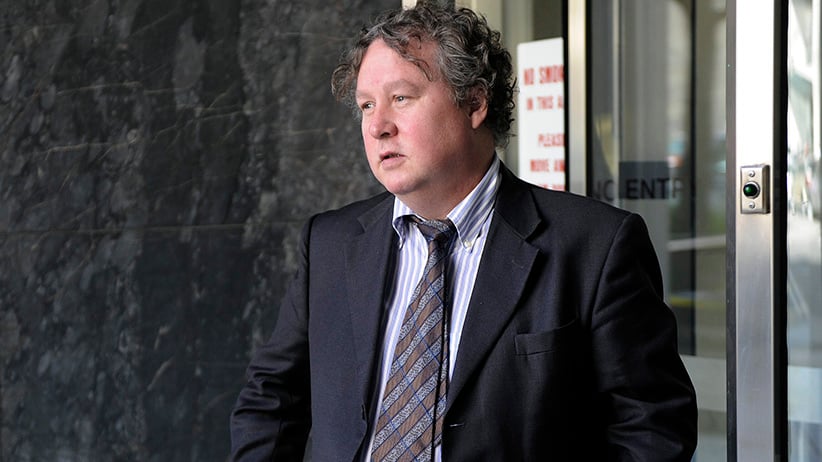 Disgraced IRB member Stevan Ellis leaves the courthouse at 361 University Ave. in Toronto after he was handed a guilty verdict by the Superior Court. Ellis suggested a favourable ruling in exchange for an intimate relationship with South Korean immigrant Ji Hye Kim. (Lucas Oleniuk/Toronto Star/Getty Images)

A former immigration judge who was famously caught on video trying to solicit sex from a female refugee claimant in exchange for safe haven in Canada has received his final punishment—a decade after the disturbing footage first surfaced.

Stevan Ellis, who presided over hundreds of asylum claims as a member of the Immigration and Refugee Board (IRB), was criminally charged in 2006 with breach of trust and bribery; convicted four years later, he was sentenced to 18 months in prison. But this week, a Law Society Tribunal tackled the one question still hanging over his high-profile case: should the disgraced Ontario lawyer lose his licence?

The answer was never really in doubt.

Ellis displayed “an utter lack of integrity” and “brought Canada’s justice system into disrepute,” the tribunal concluded, and taking away his licence is the only way to maintain public confidence in the legal profession. “It is hard to imagine more egregious actions,” reads the panel’s 12-page judgment, released Feb. 2. “He used his position to offer a female claimant a positive decision in exchange for a sexual relationship.”

Now in his mid-50s, Ellis has two weeks to surrender his licence. He must also pay $5,000 in legal costs to the Law Society of Upper Canada.

The judgment marks the final chapter in a humiliating saga that began in September 2006, when Ellis, a former Toronto city councillor, presided over the case of Ji Hye Kim, a South Korean refugee claimant. After the hearing, Ellis approached the 25-year-old and asked where she worked. A Korean restaurant, she replied.

Ellis went to the restaurant—twice—but Kim wasn’t there. During a third visit, he told the woman he still hadn’t reached a decision on her asylum file. When he stopped by a fourth time, he convinced Kim to meet him for coffee. Suspicious by that point, she and her boyfriend set up a camera near the coffee shop’s outdoor patio to record the conversation. “You’ve got a boyfriend and I’ve got a wife,” Ellis told her, as the camera rolled. “If we do things on the side, that’s OK. I’m not going to be asking you to move in with me.”

The couple sent the undercover footage to both the RCMP and numerous media outlets. When Ellis was arrested two weeks later, his sex-for-citizenship scheme triggered headlines across the country.

At trial, Ellis said he suffered from untreated bipolar disorder and was in a hypomanic state—making him feel invulnerable and grandiose—when he tried to take advantage of Kim. The judge accepted the medical evidence, but still ruled Ellis “knew that what he was doing was wrong.” (Because he filed numerous appeals, Ellis didn’t begin serving his 18-month sentence until April 2014; he was released on early parole six months later.)

At the tribunal hearing, the Law Society sought to have Ellis’s licence revoked, the standard penalty for a lawyer guilty of conduct unbecoming. Ellis requested a “significant suspension” instead, holding out hope he would one day be allowed to work as a lawyer again. Alternatively, he asked for permission to surrender his licence—a punishment slightly less harsh than outright revocation—on the grounds that his medical condition played a role in his egregious conduct.

The tribunal shot down any possibility of a temporary suspension—“reassurance to the public requires that Mr. Ellis no longer practise law,” it ruled—and like the trial judge, the panel concluded that the bipolar diagnosis did not excuse his “dishonest” behaviour. “Mr. Ellis knew, when he did it, how unethical his actions were,” the ruling continues. “Even though he did not fully understand that it could hurt him, he made the choice to do something terribly wrong.”

Still, the tribunal did agree that Ellis’s medical condition was enough to justify a licence surrender instead of revocation. “Because of the effects of his illness, Mr. Ellis did not behave as he might have otherwise,” the ruling states. “This should be recognized in the penalty.”

The tribunal also acknowledged that Ellis, who resigned from the IRB shortly after his arrest, “has paid a heavy price” for what he did. “He has has lost his job, his reputation, gone to jail and experienced serious financial consequences,” the panel wrote. “We accept that Mr. Ellis feels remorse for what he did. With his recovery, he now understands the impact it has had on all involved, including the complainant, his family, the IRB and the Canadian justice system.”

A justice system in which he’s no longer welcome.