The Alberta NDP won't run with scissors—or even walk

The Alberta budget follows the NDP's binary thinking on fiscal matters: it’s either reasonable spending increases or the bloody abyss 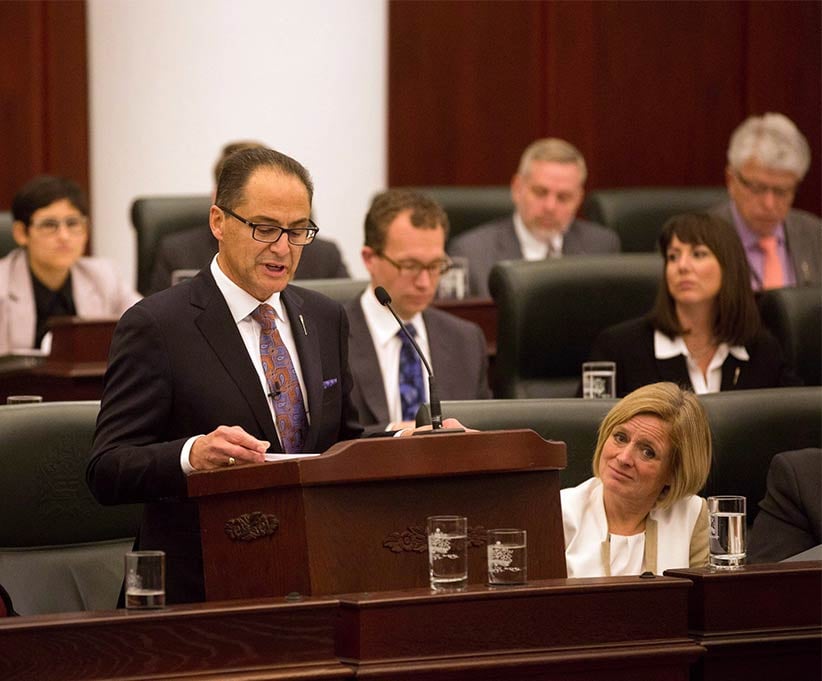 For 15 years as a Calgary city alderman, Joe Ceci resisted almost any conservative’s attempt to pare back or reduce city spending, warning of the utter pain Calgarians would feel, and that what counterparts thought were light trims would actually puncture front-line services.

Ceci introduced his first full-year budget as Alberta’s NDP finance minister on Thursday, showing that little has changed with regards to his fear of what scissor marks can do to a government spending plan. The Rachel Notley government has essentially maintained its binary thinking on fiscal matters: that it’s either reasonable spending increases or the bloody abyss—an eight-year plan out of deficit, or little Brayden will never learn how to carry the six and dear Estelle will clutch her kidneys in agony as the waiting room ceiling slowly caves in on her.

The oil slump obviously contributes a lot to Alberta’s unprecedented $10.4-billion budget deficit, but the NDP insist it could have been worse were it not for their cost-control measures of freezing management pay, nibbling off about $11 million per year from an overhaul of government agencies, and deferring some campaign promises like full-day kindergarten and child care to future years—as well as a commitment to keep operating expenses below the inflation rate plus population growth, something Ceci notes past Tory governments failed to do.

“I’m confident that we are going to be using every tax dollar in the most efficient way we can possibly use,” Ceci told reporters.

But those past Tory governments weren’t thrust into the direst economic period Alberta has faced in a generation, and nor did they face this year’s meagre resource revenue haul of only $1.4 billion. That’s the lowest since 1974.

Provincial debt will balloon to $57 billion in three years—Alberta was the only province to be debt free over the last decade—and Ceci had to discard a law capping the province’s debt-to-GDP ratio at 15 per cent, just four months after that law was passed. By 2018-2019 that ratio will be 15.5 per cent, likely giving Saskatchewan yet another chance to boast of an economic indicator superior to Alberta’s. (Saskatchewan’s debt-to-GDP ratio currently stands at 6 per cent.)

Ceci and Notley are doing precisely what credit rating agencies had warned the province not to do. Standard and Poor’s had already downgraded Alberta below its cherished AAA credit rating, and Moody’s and DBRS warned they’d follow suit without a credible multi-year plan out of the muck. Alberta could find much tougher sledding as it solicits bonds to pay for billions in operating expenses.

“Show some common-sense restraint now, so you don’t have to make draconian changes in the future,” said Ric McIver, interim leader of the Tory opposition, who sat opposite Ceci on Calgary council last decade. “Bob Rae comes to mind in Ontario—everybody was happy for the first year or two and then everybody was twice as unhappy.”

The number of people employed by the Government of Alberta will actually increase rather than fall through attrition, as the Wildrose Party opposition urged, which isn’t quite the knife-between-fangs flourish the NDP wishes to accuse them of. The budget is named the Alberta Jobs Plan, because of the Notley team’s insistence the economic-development tax credits and steady infrastructure spending it contains will help “create the environment” for the provincial workforce to expand by 100,000 people over the next three-years. The prior NDP budget assumed the same employment growth rate, despite being titled something else.

The final Tory budget before that party’s ouster, better known as Jim Prentice’s “look into the mirror,” urged Albertans to swallow a health premium and myriad fee increases, and reduced health-care spending by 0.8 per cent or $160 million. Health administrators gulped but said they could handle that without slashing the front line, while the unions and their client advocacy agencies howled in pain. The NDP pledged an Alberta without any such sacrifices on the spending or revenue sides. The Tories had forecast $2.4 billion less spending this year than NDP budgeted, even though Prentice had assumed an oil price of US$62.80 a barrel, rather than the US$42 the Ceci plan projects.

For a sense of what it looks like when a centrist government’s fiscal nightmare shocks them into action, make like a laid-off oilsands trucker and head back to Newfoundland and Labrador. In its budget also released Thursday, the Liberal government of Dwight Ball had to gouge and slash widely to get the deficit down to $1.8 billion, which would be $15 billion if that province was as populous as Alberta. The Ball government doubled the fuel tax to 33 cents per litre, hiked the sales tax—what’s a sales tax? asked the Albertan—by two points, charged a “temporary tax” levy of up to $900 per person, hiked income taxes for all levels and added a corporate levy, cut 650 public-sector jobs, increased class sizes and cut Memorial University’s grant. With all that, the Rock’s budget is projected to balance by 2022-2023. Alberta reporters had to look beyond the fiscal documents to figure out Ceci’s timeline for balance: 2024, rather than the 2019 target he had previously set, and only if the economy recovers enough by then. That would mean an NDP government would deliver a balanced budget only after winning two more elections.

The NDP’s modest cost-containment ambitions do feature one unspoken Trumpian flourish: They need to make better deals! The doctors, they’re killing us! The government begins renegotiating contracts with the traditionally NDP-loving public-sector unions this fall, and the premier is appealing to their consciences to respect Alberta’s fiscal straits. Ceci and ministers are more direct in their push for a lower-cost deal with physicians, one employment group the New Democrats don’t share the same strong bonds with as they do with jail guards and nurses.

One left-leaning analyst had urged Notley to spend her political capital and get boldly progressive in this first true NDP budget. The budget offers substantially more affordable housing, rehashed promises for low-income family and child benefits, and puts into place the carbon tax its climate change panel introduced last fall. But no large good-news surprises. A leap this is decidedly not, to borrow the latest leftie buzzword. “I can remember people across the aisle saying, ‘You’re going too fast. You’re going too fast.’ It’s only fast relative to the inaction of the previous government for 44 years,” Ceci told reporters.

The NDP insists the steady-spending government is a product of listening to Albertans, and the Notley government showed it had listened to at least some sensible critiques by backing down on two fronts.

The government scrapped the job creation grant lauded in its fall budget, after businesses and economists widely called it an ineffective and blunt tool that would have only rewarded employers setting up shop anyway. Amid the protests by the Alberta Association of New Dry Cleaning Shops in Brand-New Communities that Were Expanding Regardless, those grants are replaced by Chamber of Commerce-friendly tax credits for mid-sized and small enterprises, and capital investment.

The other shift was more subtle: a move away from declaring the Alberta carbon tax would be “revenue neutral,” when its proceeds will be dispersed in several areas. The government mollified small businesses with a one-point tax credit, and will follow through on a pledge to offer regular “rebate” cheques to families making less than $100,000 and singles earning half that or less. (Alberta chose not to offer a special break to non-farm rural residents like British Columbia did.) But a much larger share of carbon tax proceeds will go to various “green infrastructure” investments, renewable power programs and energy efficiency incentives, good-news items for Environment Minister Shannon Phillips to announce later, though before the carbon tax pushes up heating and gasoline costs.

After the election last May, this was the Alberta NDP’s first crack at budgeting over a whole year. If it wanted to confront its fiscal reality this time out, it would have had three whole years for wounds to heal before the 2019 election. If the economy doesn’t improve, Ceci will have to overcome his aversion to scissors when it might hurt his governing party a lot more.