The Alberta NDP's convenient peek into the shadows

The Notley government's release of a normally secretive “CIA” audit raises the question: Why are Albertans kept in the dark about other audits? 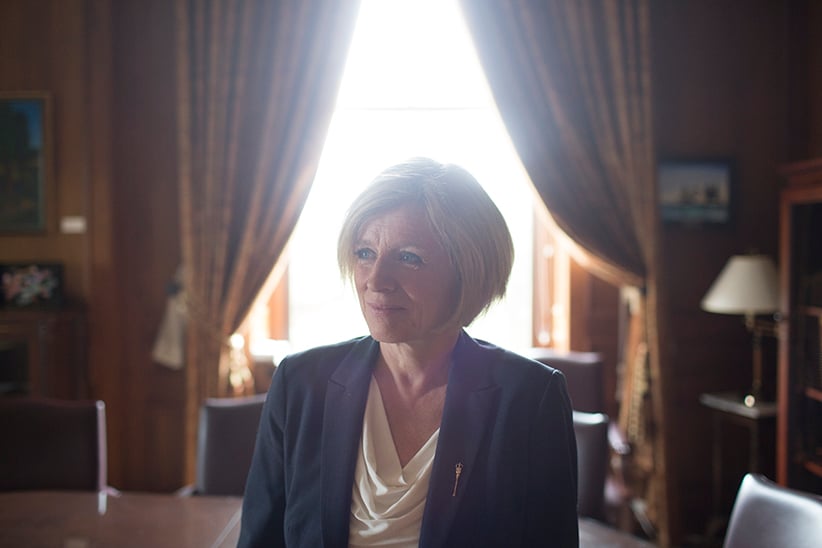 In early May, Rachel Notley’s NDP marked one year since their wow-that-just-happened election victory, but there was little time to celebrate thanks to a colossal natural disaster. No matter; there would be a whole weekend set aside in June to bask in anniversary glory—the party’s annual convention in Calgary.

Some 800 New Democrats gathered to hear Alberta’s premier beam about her gender-equal cabinet (four months before Justin Trudeau acknowledged it was 2015), promote her her carbon tax and climate change policy, declare her party agenda the people’s platform and rally her believers against the “privatizers and dismantlers” and the “anger machine.” Plenty of change after 44 years of Tory rule, and more to come: the Calgary Sun noted the education minister at one point crooned lines from Tom Petty’s “I Won’t Back Down.”

On Monday, when that Hyatt Regency ballroom was stripped of its orange decorations, Notley’s team in government bid to underline the weekend’s “we’re not going back” cries. Agriculture Minister Oneil Carlier announced he was sacking the whole board of a Crown farm insurance and lending agency—and calling in the police to investigate—because of executives’ expenses and hospitality practices.

According to a report by Alberta’s chief internal auditor, which Carlier released, the corporations president and two other top executives racked up lavish expenses like 100-kilometre limo rides, and significantly broke rules by letting a reinsurance vendor treat them to food, events ticket and golf—in 2014, the agency president enjoyed such illicit largesse on 50 separate days.

To a veteran Alberta legislature watcher, those findings will induce much tut-tutting. But the first clause of that above paragraph is the real shocker. Alberta internal audits never get released. It’s surely by mere coincidental abbreviation that a chief internal auditor report is dubbed a “CIA report.” It’s a wing of the Alberta government that’s even more elusive and secretive than the better-known U.S. intelligence agency. In the 12 years I have followed the Alberta legislature, I have never heard that acronym, nor had access to one of the auditor’s reports.

The province’s corporate internal auditor is the smaller insider analogue to the public Alberta Auditor-General, with a narrower focus on finances and policy compliance. The AG is appointed by and answers to the legislature, and is obliged to release audits publicly on a regular basis. The CIA is appointed by and answers to the Treasury Board minister. There is no reporting structure, but evidently the ministers can choose to release them if they deem them in the public interest.

The $4-millon-a-year office produces about 60 audits a year, government spokesman Renato Gandia confirmed in an e-mail to Maclean’s. This audit on the farm insurer might be the most damning report Alberta’s chief internal auditor has written in decades. On the other hand, it may be a rather quotidian set of findings, and would be if Carlier’s allegations of an entitled culture hold true. We don’t know, because (whispers darkly) it’s the CIA.

“In the majority of cases, they are conducted to ensure that best financial practices are followed in departments across government,” Gandia writes. “They are not generally released because they are used for internal planning purposes.” There seemed to be two compelling reasons to make an exception in this case: this report alleges serious disregard for taxpayer money and rules, and it gives the New Democrats a handy club with which to bash the Tories.

Notley could just ask Justin Trudeau or Stephen Harper how destructive it is to routinely release internal audits, just sitting there on ministry websites. (That last link is a 2014 report that shows oversight and control problems in the Beirut embassy; nothing terrifying, but yeah diplomats, keep track of all your official seals).

There’s actually an aspect of this CIA situation that smacks even more of shadow-ops. One cannot use Freedom of Information requests to access internal audits and related documents, because 2006 legislation passed in the final session of Ralph Klein’s rule specifically sealed Alberta CIA documents for 15 years. In other words, the investigative journalists and other curious folks of 2022 will finally, finally be able to cut the government a $25 cheque for the request fee and find out what sort of internal financial control mechanisms were found lacking in the long-defunct Ministry of Children’s Services, which last existed as a stand-alone ministry in 2011.

At the same time as the Klein Tories sealed internal audit records for 15 years, they exempted ministerial briefing notes and briefing books from public access for five years. Opposition politicians in 2006 were miffed. “The idea that this information would somehow lie fallow and out of the reach of the public … for such a long period of time I find to be, well, very troubling,” said David Eggen, currently Alberta’s education minister. It’s “a really grave threat to public accountability,” said Brian Mason, then leader of the tiny NDP caucus and now House leader and transportation minister. Another colleague likened in to the Kremlin.

Ten years later, and this secretive legislation remains in place. The NDP have no plans to review or change the Freedom of Information rules they used to call troubling, grave and Kremlineque. Though they don’t rule out doing so in the future. “We are always looking at ways to make government more transparent and accountable to Albertans,” the spokesman writes.

It would take some legislative or procedural legwork, but it’s hard to see why the Notley government cannot switch on the lights to regularly release audits by the chief internal auditor. It’s nice when a new government rushes to stamp out cronyism or extravagances they can blame on the last cohort. It’s noble when a government ushers in new rules and mechanisms that let Albertans learn about any future misdeeds that might be best blamed on the themselves.