The American Dream has moved to Canada

By every measure, Canada is the true place to find 'life, liberty and the pursuit of happiness.' Let's stop squandering our good fortune.

From the very moment of its creation, Americans have always imagined their country to be a beacon of opportunity for the world. Thomas Jefferson lit that torch when he wrote in the Declaration of Independence that all men have the right to “life, liberty, and the pursuit of happiness”. This notion that everyone deserves a chance, and will most likely find it in America, has been arguably one of the most attractive and powerful ideas in modern history, guiding millions to Ellis Island, in search of a good job, a good education, a white picket fence and a two car garage.

But where once America stood alone as the land of opportunity, there are now dozens of other countries that have surpassed the United States; chief among these is its unassuming northern neighbour, Canada. Where do you go now for “Life, liberty, and the pursuit of happiness”? Canadians live 2.5 years longer than Americans. They are six times less likely to be incarcerated. And the World Economic Forum ranks Canadians as the 6th happiest people in the world, while Americans lag behind at 13th.

MORE: On CNN with Fareed Zakaria, Scott Gilmore discusses how the American dream has moved to Canada

Every aspect of the American dream is now more easily found in Canada. In the United States, 46 per cent of the population has been able to obtain a college degree—in Canada it’s 59 per cent. After graduation, Canadians are more likely to find work, with an employment rate four points better. You are more likely to afford a house with a white picket fence in Canada, where home ownership rates are five per cent higher. Canadians also have more time to enjoy their homes, as they work over 80 hours fewer per year—and they take an extra three days vacation.

Compared to Canada, America isn’t even the “land of the free”, anymore. The Cato Institute’s Human Freedom Index considers Canadians to be the sixth freest people in the world, while Americans limp in at 23rd, behind Poland. The conservative Heritage Foundation, based in Washington, ranks Canada and the U.S. seventh and 17th respectively for economic freedom. Free speech? Reporters Without Borders scores Canada 18th for press freedom; in spite of its much vaunted First Amendment, America only manages 41st.

The American Dream promised equality, a level playing field where everyone could pull themselves up by their bootstraps, but that too is more a Canadian thing. Canada’s “Gini coefficient”, a measurement of economic inequality, is significantly better than America’s and has been for 80 years now. In Canada, you are twice as likely to move from the poorest quintile of the population to the wealthiest. Similarly, the link between the income of a parent and a child is half as strong in Canada. 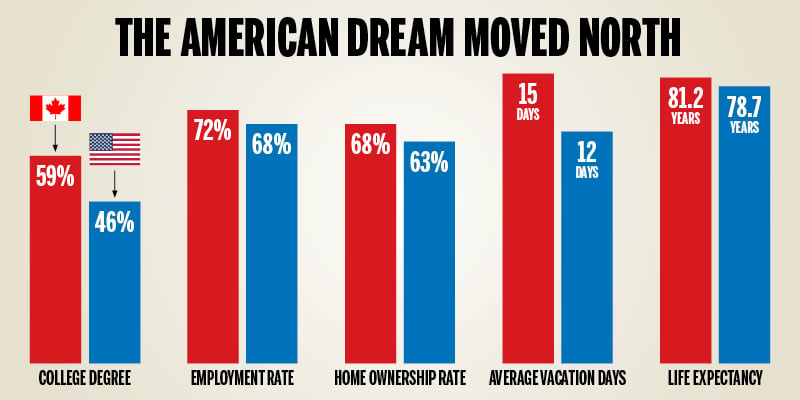 By virtually every measure, Canada has surpassed the United States as the shining city on the hill, where everyone is safe to reach their potential. And people around the world have begun to notice. From the United States, refugees and asylum seekers are now fleeing into Canada hoping for a fair immigration hearing and a better future. In Latin America, there are reports of economic migrants heading north, intending to cross the U.S. border and keep moving, into Canada. And, overseas, ESL students are increasingly choosing Canada over the U.S.

Whether it was due to geography or history or maybe even policy, we have arrived. Everything America once aspired to be, we now are. Not only have we achieved the fabled American Dream, we are arguably among the safest, healthiest, happiest human beings to have ever existed.

And what are we doing with this incredible good fortune? If we are painfully honest with ourselves, not much. We measure out our lives in coffee spoons and Caribbean holidays, a nation of overweight middle-class suburbanites, upset that a carbon tax adds an extra 5¢ at Tim Hortons, or one less day at the beach in Jamaica. No generation of Canadians has ever had more and been able achieve more than us—and no generation has been less ambitious. We have all the tools and all the opportunity to do great things, but no purpose, no national project, no imagination and no sense of determination.

And this complacency is abetted by our shameless political leaders, breathlessly emoting about “helping the struggling middle class”—a less ambitious slogan than “Make America Great Again”, but just as fatuous and just as cynical.

I have two suggestions, two national projects towards which we could strive. First, it is horrifying that while most of us luxuriate in the shiny Canadian Dream, many Indigenous Canadians live in communities without running water, basic healthcare, or any hope of a prosperous future. Surely, if we finally stopped kowtowing to the false gods of the Reserve System and the Indian Act, we could end this injustice within a generation.

And second, as the American Dream has now become Canadian, perhaps it is time we also took on the role as the land of the free, and opened our doors wider still. Numerous studies have shown Canada could easily absorb far more immigrants than we do now. In fact, if we want to protect our economy from the effects of an aging population and declining birth rate, we need to attract more.

It is often noted that in the early 20th century, Canadian prime minister Sir Wilfred Laurier declared, “Canada shall be the star towards which all men who love progress and freedom shall come.” Let’s make that line as famous and meaningful as this once was: “Give me your tired, your poor, your huddled masses yearning to breathe free.”