Why the anti-abortion movement is embracing gender equality

Pro-life activists are taking aim at sex-selective abortions—but that's merely a Trojan horse, to help them curtail access to abortion services in Canada 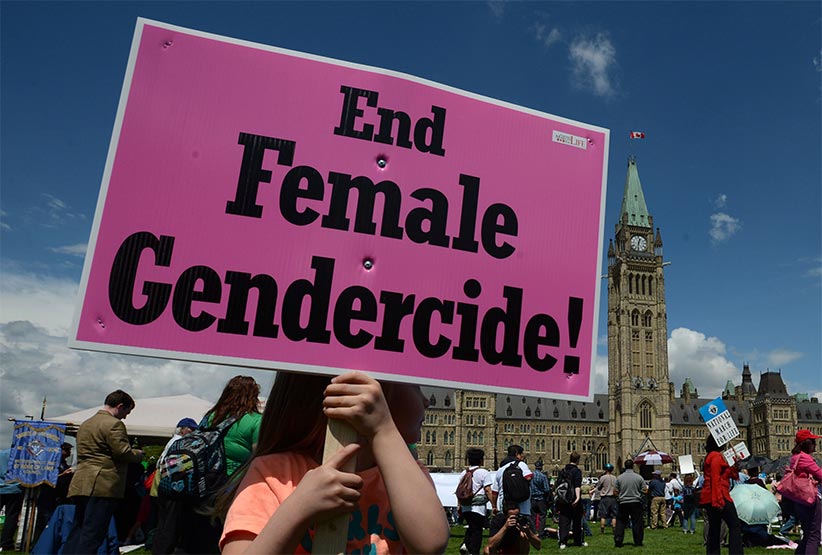 A young girl participates in the March For Life on Parliament Hill in Ottawa on Thursday, May 9, 2013. (Sean Kilpatrick/CP)

You’d think the pro-life camp would be rejoicing. After all, far fewer women terminate their pregnancies today than as recently as 12 years ago. Strangely, though, there is little mention of the good news on any of the main pro-life websites in the country. A browse of, say, Campaign Life Coalition’s website reveals the familiar doomsday-esque reverie of torqued statistics—“Since it’s [sic] legalization in 1969, 4 million Canadian have died from elective abortions”—and a parade of blood and gore abortion pictures. Times have changed; anti-abortion tactics have not.

Actually, that’s not quite true. Over the last few years, Canada’s anti-abortion movement has grafted a new face onto its stock and trade hyperbole. It is a friendlier face, to be sure, one which seeks less to antagonize women than use them as a proxy in its continuing public relations campaign to curtail access to abortion services in Canada. And the movement has recently found a reliable bogeyman: sex-selective abortions.

The practice of sex-selective abortions has crept into Canada. A recent study in the Canadian Medical Association Journal suggests that amongst certain Indian immigrants­, “prior induced abortion is associated with subsequently giving birth to a boy, especially at the third birth and among women who had given birth to two previous girls.” The data shows the practice has skewed the male-female ratio within segments of the Indo-Canadian community, and suggests women undergoing sex-selective abortions are more likely to have multiple abortions, which “have shown to be detrimental to a woman’s health and also to a subsequent pregnancy.”

In short, the backward practice of sex-selective abortion is potentially damaging to women in particular and society as a whole. And the anti-abortion movement has pounced. “This is quite appalling,” Campaign Life Coalition president Jim Hughes told The Catholic Register. “It travelled from their country of origins to here. They [have to] wake up and realize that there is equality here.”

This rhetorical slight of hand—framing sex-selective abortions as a gender, not reproductive rights, issue—is no accident. In Canada, harping on the issue of abortion has long been a political non-starter. Public opinion polling on the subject is notoriously unreliable; support for abortion waxes and wanes depending on the wording of the question. Yet on the issue of reopening the abortion debate, the polling data is generally clear: Canadians do not want it.

No pro-choice type himself, former Prime Minister Stephen Harper was at least pragmatic enough to stamp out any anti-abortion rumblings emanating from the socially conservative recesses of his party.

But gender equality is another story entirely. While we may be a cautious bunch on the issue of abortion, we Canadians are wildly, flamingly liberal on equality of sexes—94 per cent in favour of it, according to but one recent poll.

Pro-life types have cannily glommed onto sex-selective abortion as a means to demonstrate the evils of the pro-choice narrative run amok. They’ve rebranded the practice “gendercide,” and one politician amongst the ranks has attempted (unsuccessfully) to introduce a motion condemning it. They’ve appointed more female spokespeople. Twenty years ago, women who received abortions were murderers. Today, they are more likely to be victims.

It’s part of what University of Ottawa researchers Kelly Gordon and James Saurette call the “pro-woman” rhetoric of the anti-abortion movement. “Anti-abortionists have been losing since 1969 [when the Canadian government liberalized abortion laws],” Gordon told me recently. “They’ve been viewed as being very anti-woman. This is a strategic shift. Concentrating on sex-selective abortions is a far more sympathetic discourse.”

Enacting a law against sex-selective abortion would be folly. In India, a country of 1.2 billion, there were all of 20 convictions between 1994 and 2010, according to the government report. But then, preventing sex-selective abortions isn’t the goal of pro-lifers in this country; prohibiting abortion outright is. Gender equality is just a useful vehicle to this end.

A useful vehicle, and a Trojan horse. Restricting reproductive rights would be far easier with an existing law banning what amounts to an aberration of the practice. By draping itself in the flag of gender equality, the anti-abortion movement is rehashing a debate it lost long ago. It’s a savvy and cynical move, and should be recognized as such.

Ultimately, of course, the way to curb sex-selective abortions is roughly the same as curbing the frequency of abortions in general—not through legislation, but education. This country’s long-diminishing abortion rate is the best testament to this fact.