The anti-Muslim attack in Ontario, and the power of sharing grief

Image of the Week: New Zealand showed two years ago how a country can stand together against hatred and terrorism. Now it's Canada's turn. 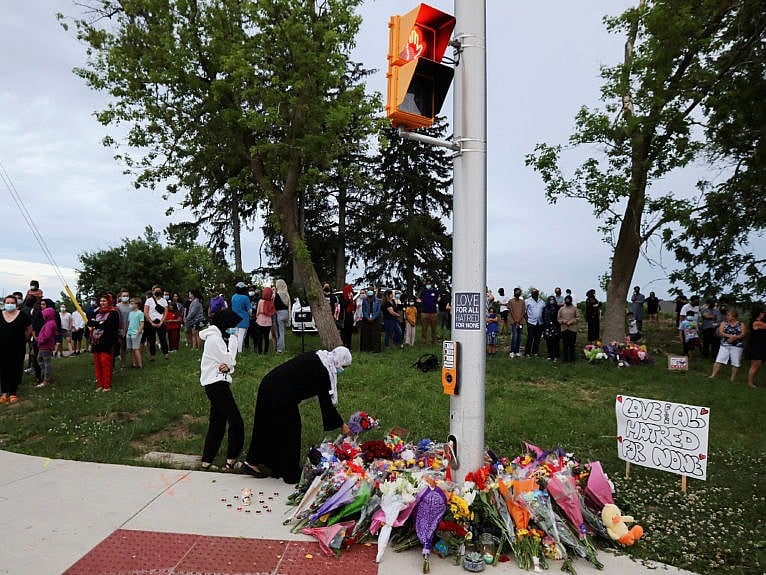 People in London, Ont. attend a makeshift memorial where a man driving a pickup truck jumped the curb and ran over a Muslim family in what police say was a deliberately targeted anti-Islamic hate crime (Carlos Osorio/Reuters)

After a white supremacist terrorist killed 51 Muslim people in Christchurch, New Zealand, in 2019, the outpouring of national grief was palpable. Thousands of people attended the memorial, and Prime Minister Jacinda Ardern wore a hijab and said a Muslim prayer to open a sitting of the country’s parliament. New Zealand set a high bar for how other nations could—indeed, should—react if similar crimes were repeated against their own Muslim populations. This week, it is Canada’s turn to rise to the challenge. In what police are calling an act of anti-Muslim hatred, and investigating as terrorism, a driver in London, Ont. plowed a pickup truck into a family of five, killing four of them: Salman Afzaal, 46; his wife, Madiha Salman, 44; their 15-year-old daughter, Yumna Afzaal; and Salman Afzaal’s 74-year-old mother. Only the youngest in the family, a nine-year-old boy, survived and was taken to hospital. Police arrested a 20-year-old white man, Nathaniel Veltman, and soon after said the victims had been targeted because they were Muslim. Political leaders were swift to condemn the attack as a hate crime. But the broader community’s response will be the true gauge of Canada’s resilience and solidarity. If diversity is indeed our strength, as our Prime Minister likes to say, then now is the time to show it.