The battle to clean up B.C.

Terry Glavin on the efforts to undo a decade of indifference that turned Vancouver into an epicentre of fraud, scams and real estate mania 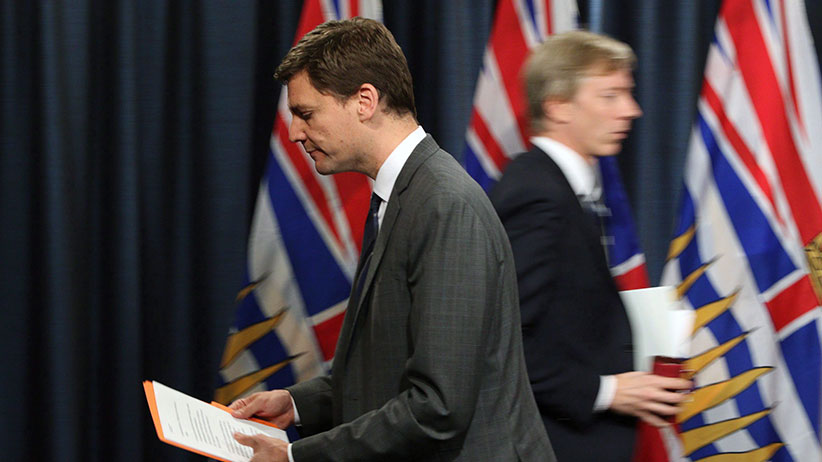 Attorney General David Eby leaves the podium after speaking to media about legislation banning union and corporate donations to political parties during a press conference in Victoria, B.C., on  Sept. 18, 2017. (THE CANADIAN PRESS/Chad Hipolito)

It was such a lovely picture that the City of Vancouver managed to paint of itself over the 10 years that Gregor “Happy Planet” Roberston was mayor that it’s no wonder so many people believed it. A thriving and happily multicultural Pacific metropolis of bike lanes and balmy weather. Diversity and eco-density and backyard chickens, high-tech startups, and the ski slopes on the mountains just across Burrard Inlet.

Now, with Robertson on his way out, and his Vision Vancouver party a ruined brand, whoever comes out on top in the October civic elections will be left to deal with what’s become of the place. Vancouver is now a kind of free trade zone for gangland money launderers, absentee offshore real-estate speculators, Chinese princelings on the lam and globe-trotting tax frauds. Metro Vancouver is an international housing-affordability basket case and the epicentre of Canada’s fentanyl overdose crisis. Over the past decade, homelessness has doubled, at least 4,000 people are sleeping rough in the streets, and there are now 70 homeless camps across the region.

This wasn’t all Robertson’s fault, of course, not by a long shot. B.C.’s provincial Liberals played their part in it. Defeated last May in a hair’s breadth election that resulted in the New Democratic Party forming an alliance with B.C.’s Greens, Christy Clark’s six-year tenure as the Liberal Party premier ended under a cloud of RCMP investigations into payments from lobbyists and an ethnic-vote harvesting scandal. A trove of incriminating paper trails only now coming to light shows Clark’s Liberals knew very well what was happening.

For now, the job of sorting everything out has fallen mostly to David Eby, B.C.’s 41-year-old Justice Minister and Attorney-General. Two months ago, in a speech at a conference co-hosted by Transparency International Canada and the International Centre for Criminal Law Reform, Eby described Vancouver and British Columbia in the most accurately unflattering terms.

“We knew there was something strange going on, but, my God, we had no idea it was this big,” Eby said. British Columbia had become reduced to “a jurisdiction where the rules do not apply to white collar crime, fraud, tax evasion and money laundering, where even if the rules do apply, enforcement is absent.”

Over the past 10 years, the B.C. Securities Commission had collected less than two per cent of more than a half a billion dollars in fines levied against a rogue’s gallery of fraudsters, swindlers and ripoff artists. Among the beneficiaries of the previous Liberal government’s opaque International Business Activity head-office tax shelter scheme with Advantage B.C.: PacNet, a collection agency the U.S. Treasury Department had listed as a transnational criminal organization with a sordid track record in money laundering and mail fraud, and China Poly Group, a shady Chinese state-owned enterprise with a payroll of 76,000, intimate ties to the People’s Liberation Army, and a portfolio that ranges from real estate development to arms and explosives and art exhibits. The tax-shelter arrangement is now shuttered.

Among the sleazier aspects of the Liberal legacy was a peculiar toleration for dirty money being laundering through B.C.’s licensed casinos. Provincial officials were aware of the nastiness as far back as 2009. In January of that year, the Integrated Illegal Gaming Enforcement Team (IIGET) conducted a threat assessment focusing on organized crime in licensed casinos and asked the Crown-owned B.C. Lottery Corporation for expanded powers to tackle the problem. Six months later, the IIGET unit was disbanded because of “funding pressure.”

Last September, Eby appointed former RCMP deputy commissioner Peter German, an authority on money laundering, to come up with a series of recommendations on how to cut the flood of dirty money into B.C.’s casinos, Metro Vancouver’s overheated real estate market and “other areas of B.C.’s economy.” German’s report is due next month.

In the meantime, Eby has instituted a simple rule change aimed at preventing drug money from being loaned out by underground “banks” to visiting high-stakes gamblers. The change was recommended to the Liberal government in 2016 in a report by MNP LLP, a national accounting, tax and consulting firm. The Liberal government kept the report secret. Among its findings: over the course of a single month—July 2015—Richmond’s River Rock Casino accepted $13.5 million in $20 bills from mostly “high roller Asian VIP clients,” in transactions that sometimes exceeded $500,000.

The MNP LLP rule change that the Liberals ignored, but which Eby has put in place: You will no longer be able to drive your Lamborghini from your $10 million Point Grey mansion across the Oak Street Bridge to Richmond, stroll into the government-licensed River RockCasino and buy your chips with a half a million dollars in $20 bills stuffed into a duffel bag, then cash out on the same day.

Another change the NDP has brought in will have a lasting impact on the way money sloshes around B.C. provincial and municipal politics. In 2015, River Rock’s parent company, Great Canadian Gaming Corporation, donated $31,468 to Christy Clark’s Liberals. River Rock donated $3,300, and Gateway Casinos pitched in with $67,397. Those days are over. Last October, the NDP brought in new rules banning corporate and union money in provincial and municipal politics.

But it’s not at all clear just how far Eby will be allowed to go in his determination to clean house. For one thing, he’ll have to avoid making enemies of certain of his fellow New Democrats who did quite well for themselves in Vancouver’s civic politics and in their own real estate investments. He’ll have to watch his back. But the New Democrats are going to have to do something pretty dramatic.

Last month, Vancouver showed up as the third most unaffordable city on Demographia’s list of 92 cities around the world, behind Hong Kong and Sydney. When it comes to cities undergoing a deterioration in housing affordability, Vancouver ends up the worst. Demographia classifies a property market with median home prices five times the median income to be “severely unaffordable.” In little more than 10 years, Vancouver’s housing affordability predicament worsened from a home price multiple of 5.3 to 12.6 by last year.

Andy Yan, an urban analyst with Simon Fraser University’s city program, has been tracking the deterioration in Metro Vancouver’s housing affordability for several years. In 2014, 28 per cent of detached homes in Metro Vancouver were valued in excess of $1 million. In 2016, the percentage had jumped to 43 per cent. As of July 1 last year, 73 per cent of detached houses in Metro Vancouver were assessed at $1 million or more. The 15-per-cent foreign-buyers’ tax imposed by the B.C. government in 2016 as a sop to public outrage caused only a slight pause. Within weeks, the upward climb in house prices resumed.

Back in 2011, when the average price of a Vancouver home was roughly 11 times the average household income, Mark Carney, who was the Governor of the Bank of Canada at the time, warned in a speech to the Vancouver Board of Trade that Vancouver real estate was taking on characteristics of financial asset markets that become trapped in “the classic market emotions of greed and fear—greed among speculators and investors—and fear among households that getting a foot on the property ladder is a now-or-never proposition.”

The greed and the fear took hold, compounded by a real estate spending spree of billions of dollars’ worth of capital spirited out of China by a variety of illegal, semi-legal and circuitous routes around Beijing’s currency controls.

The disastrous federal immigrant investor program contributed to this state of affairs by effectively selling Canadian citizenship to millionaire investors, mostly from China. The federal program was shuttered after assessments determined that the millionaires were contributing less to the federal treasury in tax returns than refugees. But the Quebec immigrant investor program continues in the form of a type of racket. Quebec skims an $800,000 interest-free loan from the investors as soon as they arrive. Most of them never settle in Quebec. Roughly half of the Quebec immigrant investors (28,000) have moved to Metro Vancouver, another 22,000 established residence in Ontario and elsewhere. Only 6,000 have stayed in Quebec.

A South China Morning Post analysis last December concluded that only about half of the primary breadwinners of immigrant-investor households remain in Canada after they settle their spouses and children here.

Meanwhile, detached houses and condominiums in Vancouver have become assets in a shadowlands protected by Canada’s lax money control policies. The British-registered charity Tax Justice Network, in its most recent Financial Secrecy Index, pegs Canada’s financial system as even less transparent than the setup in Russia or China.

Two years ago, when the average detached home price within Metro Vancouver had soared to $1.4 million, the South China Morning Post crunched some numbers tallied up by the mathematician Jens von Bergmann at the Vancouver data firm MountainMath Software. What the data showed was that one in 10 Vancouver households were reporting a household income that was less than the amount required just for property taxes, mortgage payments, utilities and so on. That’s 24,960 households claiming to earn less in a year than they were spending on accommodation.

Another confounding figure: an almost equal number of homes within Vancouver city limits were empty last year. City of Vancouver staff identified 25,497 homes either vacant or occupied temporarily or by foreign residents. Of those, 21,820 homes were empty, year round. Mayor Robertson’s remedy was to apply an empty homes’ tax of one per cent of the home’s value. The program cost $4.7 million to set up and an additional $1.5 million in annual operating expenses.

It’s gotten so that it is practically impossible to determine how much of Metro Vancouver’s real estate is owned by Canadians, or even by local residents. A recent Transparency International study found that because of the presence of shell companies, numbered companies, trusts and proxy owners (students, spouses) listed as title holders, it is impossible to know who, exactly, owns about half of Vancouver’s pricier homes.

Last month, Statistics Canada released data showing that roughly five per cent of residential properties in Metro Vancouver appear to be directly foreign owned, but that figure may reflect only “the tip of the iceberg,” according to Haig McCarrell, director of StatsCan’s Canadian Housing Statistics Program. SFU’s Andy Yan crunched StatsCan’s numbers to discover that one in five of Metro Vancouver condos valued at $1.5 million or more (a typical three-bedroom condo lists at about $1.62 million) are foreign owned.

Among the items Vancouver housing activists want to see at the top of David Eby’s to-do list is the closing of the “bare trust loophole,” a tax dodge that Ontario outlawed in the 1980s. The loophole obscures the actual owners of a property and facilitates the evasion of various federal and provincial taxes.

Whatever B.C.’s new government does, deflating Metro Vancouver’s obscenely bloated real estate bubble should be expected to provoke stiff, big-money resistance. Vancouver’s real estate “bubble risk” is the worst in the world, according to the Global Real Estate Bubble Index compiled by the Swiss bank UBS. But at some point, Metro Vancouver’s property bubble is just going to have to burst.

And when that happens, there will be hell to pay.

Clarification: An earlier version of this story suggested Advantage B.C. was government funded. It is a member-funded, not for profit society.

Correction, Feb. 9:  The average detached home price hit $1.4 million two years ago in Metro Vancouver, not within Vancouver city limits, as stated in an earlier version of this story.