The blizzard that buried St. John's: photos and videos

A state of emergency was declared in St. John's and other parts of Newfoundland as a huge storm buried houses and cars in snowdrifts 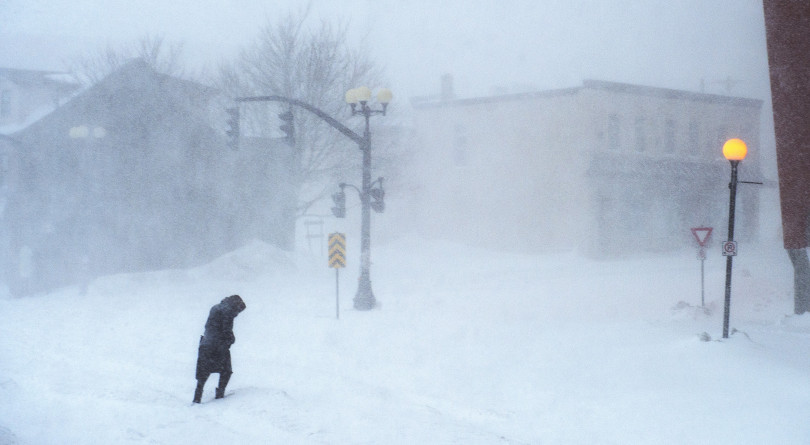 A woman makes her way through the snow-covered streets in St. John’s on Jan. 17, 2020 (CP/Andrew Vaughan

Even by Newfoundland and Labrador standards, this was an epic one. Winds hit upwards of 160 km/h and 76 cm of new snow fell in parts of the Avalon and Bonavista Peninsulas overnight in a storm that seemed more like a hurricane than a blizzard. Snow drifts buried houses and cars as St. John’s and other nearby communities declared a state of emergency. A statement from the city said the declaration “will remain in effect until further notice… All businesses are ordered to remain closed.”

Not laughing anymore. The snow is piled up so hard against my door the doorbell actually just rang. Okay, I'm laughing a little at that. #BuriedIn #CantGetOut #nlblizzard2020 #PanicTime #TimeToStartDrinking pic.twitter.com/TAPJCTuY2Z

This is one of the major arterial roads into St John's. https://t.co/WeNrRznHkK

In the Battery area of St. John’s, an avalanche hit a house last night, forcing the evacuation of the neighbourhood. Everyone in the house escaped safely, reported the Telegram.

Homes in the outer battery on Signal Hill in downtown St. John’s being evacuated after heavy snows caused an avalanche that burst into a home. #nlwx pic.twitter.com/KbaLoYtcmx

The mayor of Bonavista, John Norman, said waves were hitting the third floor of his home last night. Wind gusts were recorded as high as 164 km/h. He told the CBC: “I assumed being one of those residents being close to the water I’d hear something … but to hear it go over your roof and rain down over your roof, it’s quite something.” Environment Canada is warning of a storm surge along the Bonavista Peninsula today with waves as high as 12 m.

Somewhere under all this is a row of cars and front doors. This is going to take a while. pic.twitter.com/RGmIeaJfsf